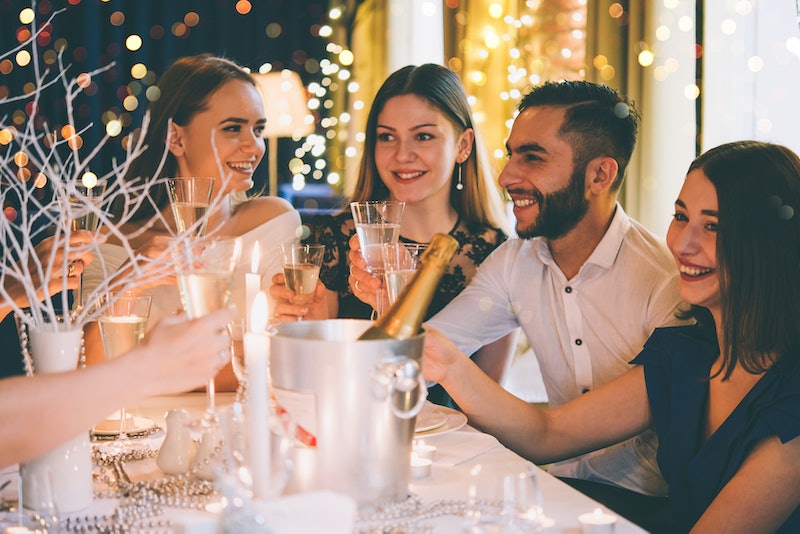 Holidays are complicated enough when you have just one partner, but when you have more than one? It can get complex, fast. Especially if your parents or family aren't supportive of your relationships; if you feel pulled in multiple directions; or if kids are involved. When you're in a polyamorous relationship, holidays are rarely simple — though they're often loud, chaotic, and tons of fun.

Poly relationships come in many different configurations, and polycules —connected networks of ethically non-monogamous relationships — can range from three people in a close triad to a sprawling network of folk. Regardless of the configuration, more people involved can mean more running around or a lot more crowded of a dinner.

Personally, I feel lucky. When it comes to the holidays, my mom is SUPER supportive and welcomes a huge number of people in my life into our celebration — she was a boss and handled an extra three adults and two kiddos this past Thanksgiving, and Christmas will likely be about twice that many, with some of my loves traveling from as far as Virginia. Most years I also make it to my dad's, whether on the day of or days surrounding, and I'm hoping to stop by my fiancee's parent's house this year, too.

Here's how seven other poly and ethically non-mono folk celebrate their winter holidays.

Polyamorous, no kids, no nesting or primary partner. Celebrates Christmas.

"I spend Christmas with immediate family (parents and siblings), and avoid talking about my personal life. Having a poly support network helps get through the stress of the holiday season."

"I spend it with family on the day of but I celebrate with partners and friends before and after and count those times as my real celebration for the holidays."

Ethically/consensually non-monogamous, no kids, no primary or nesting partner. Celebrates Christmas and "Mudita" (see below).

"Right now it isn't a big deal. I'm only dating one person and their family lives out of town. I'm going to my mom's house for Christmas. I think my partner may do Jewish Christmas of Star Wars and Chinese food. We haven't decided.

I made up a holiday to celebrate with my friends and chosen family. It's the week between Christmas and New Year's. We vote on a day. It's called 'Mudita.'"

"We usually start at our house and then take the kiddo over to my mother's house in the afternoon. My mom hosts pretty much all major holidays for our huge, sprawling, mostly technically unrelated family. Of the ~20 people who regularly show up, only about five of us share DNA.

Poly holidays (polidays??) are just as mundane as the rest of life generally. Like, really, we're actually pretty boring. Unless playing Uncharted a zillion years late and yelling at the TV as a group is particularly interesting."

"We decorate the tree and open presents with the kiddos. We put a lot of stock into random decorations, wine, and having anyone who doesn't have a place to be over for the night. There's definitely icky Christmas music and lots of doofy giggling and silliness. Whoever has nowhere to go comes to us!"

"This year I'm doing Christmas with my mum (I'm the only child of a single mother), my two romantic partners and a very close friend who used to be a romantic partner at my flat. Traditions mostly revolve around things that we eat and foods we make and were developed between me and my mother and now partners and friends have been invited to join.

Particularly, as for a long time Christmas was just me and my mum (who knows I'm non-monogamous and is massively supportive), it's nice to be at a point where I'm having holiday celebrations that have more camaraderie and connection to them. Also, as many of my close friends are LGBTQ+ and have challenging relationships with their families there have been various points where friends have joined our Christmas celebrations as well."

"Most of my polycule are busy folks with our own children and obligations, so we often have a 'third day of Christmas' — there’s Christmas Eve, Christmas Day we usually spend with our kids, Boxing Day/ Second Christmas, which those of us with extended family sometimes spend with them, and then a third day, the 27th, [where] as many of us as possible get together to celebrate. This year, two of my polycule are arriving here on the 27th, and the rest, sadly, won’t make it. We’re often separated by distance, so it’s pretty rare that we aren’t all together, though we do try to do at least a phone call/group video chat when we can."

Just like there are tons of different ways to be poly, poly folk have many different ways to celebrate the holidays. But they have three common factors: friends, family, and food. I'm guessing for most folk — regardless of relationship style — that sounds familiar.