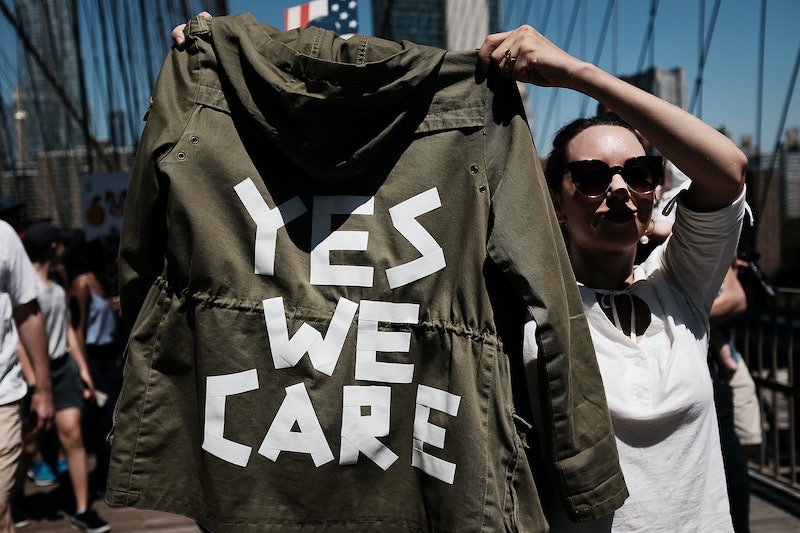 Although organizers behind Saturday's "Families Belong Together" protest marches had chosen white clothing as a symbol of peace and solidarity with migrant families, some protesters couldn't help themselves — they came wearing army green. But their deviation from the day's preferred clothing color wasn't random or even unintentional, it was a message. A number of immigration protesters trolled Melania Trump and her infamous jacket with army green shirts, jackets, and variations on the message that "Yes, I Really Do Care."

Messages — be they on t-shirts, jackets, or protest signs — of "I do care" were a common sight at "Families Belong Together" rallies held in cities across the country. From Washington, D.C. to Los Angeles, it was clear that many protesters had not forgotten the first lady's recent controversial choice of outerwear.

In June, Melania was photographed wearing an army-green Zara jacket with the phrase "I REALLY DON'T CARE, DO U?" emblazoned on the back while arriving to and departing from a visit to a children's detention center in McAllen, Texas. Although the first lady didn't wear the jacket while actually at the children's facility, but rather while boarding and de-boarding her plane at nearby Andrews Air Force Base in Maryland, it caused quite a stir nonetheless.

Melania had made an unannounced trip to the U.S.-Mexico border in an effort to get a first-hand glimpse at the crisis effecting immigrant families. As part of that visit, Melania joined Health and Human Services Secretary Alex Azar in touring Upbring New Hope Children's Shelter in McAllen, Texas.

At the time, her office claimed there was no meaning behind Melania's jacket. "It's a jacket, there was no hidden message," Stephanie Grisham, Melania's director of communications, said in a statement to Bustle.

President Donald Trump later claimed his wife's jacket had been a message to the media.

"'I REALLY DON'T CARE, DO U?' written on the back of Melania's jacket, refers to the Fake News Media," President Trump tweeted June 22. "Melania has learned how dishonest they are, and she truly no longer cares!"

But protesters at Saturday's nationwide "Families Belong Together" rallies appeared to be unconvinced. Many of them donned their own modified versions of the phrase in an effort to seized on the message and turn it into something of a rallying cry.

At the nationwide event's main march in Washington, D.C. CNN spotted a family of four from Knoxville, Tennessee, all wearing green shirts with "I Really Do Care, Do U?" written on the front. They told the cable news outlet that they thought Melania had been deliberately sending a message with her Zara jacket and so they were "sending one right back."

In Chicago, a woman was spotted at the "Families Belong Together" march carrying her own green army-style jacket with the phrase, "Why Don't You Care?" written out on the back. At that same protest another woman was spotted wearing a sleeveless army-green top with "I Do And I Vote" written on the back. In Texas, one protester donned an army-green shirt with "Si, pendeja. We Do Care."

But protesters didn't just use their clothing to troll the first lady's fashion choices. Messages pushing back on Melania's "I REALLY DON'T CARE, DO U?" jacket appeared on hundreds of banners and poster boards seen at the more than 600 "Families Belong Together" protest rallies held in cities all across the country Saturday to protest the Trump administration's failure to reunite separated migrant families.

The nationwide day of action organized by a coalition of national and local groups sought to pressure the Trump administration to reunite every separated migrant family and put an end to the practice of family detention and its "zero tolerance" immigration policy.