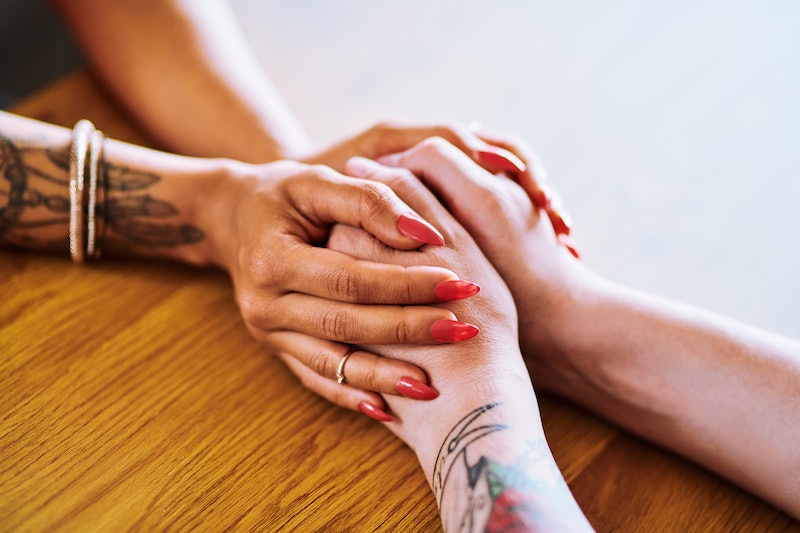 Experiencing a traumatic event, like a natural disaster or an accident, can create unexpected ripples through life for years afterwards. In some people, that trauma can go on to cause post-traumatic stress disorder, or PTSD, a condition that has symptoms like distressing flashbacks and high levels of anxiety. Science shows that PTSD affects the brain and memory, changing the way it process information, and that can create a lot of issues when it comes to retaining new knowledge and recalling it on command.

"Memory disturbances are common in trauma survivors, and particularly so for survivors with PTSD," Kristi Samuelson Ph.D., an associate professor in the Department of Psychology at the University of Colorado and a PTSD researcher, tells Bustle. When it comes to figuring out why the disorder is so rough on memory, though, things become complicated. Information doesn't live in one part of the brain, and experts don't agree on exactly how or why PTSD makes remembering past traumatic experiences so tricky.

PTSD can affect the brain's capacity to remember in many ways, Samuelson tells Bustle. "First, there are often disturbances to the trauma memory itself," she says. "While some people recall memories with remarkable clarity, others report complete amnesia for significant aspects of a traumatic event and uncertainty regarding the sequence of events." For a lot of people, though, the recollection is fractured, with some parts very clear and others jumbled or missing. "Many trauma survivors dissociate at the time of trauma," Samuelson says. "Core areas of the brain go into survival mode, making it impossible to encode what is happening." Disassociation tends to shut down the area of the brain responsible for processing experiences from the past, according to a study published in Current Psychiatric Reports in 2017.

Traumatic memories aren't ordinary ones. "They are encoded and consolidated differently, in part due to the release of stress hormones that damage areas of the brain," Samuelson says. "Consequently, traumatic memories are highly prone to errors and changing over time." Research published in The Journal of Neuroscience in 2017 suggests that peaking stress hormones might be responsible for cognitive impairment in people with PTSD, including in the parts responsible for recalling the past, as they stop synapses in the hippocampus growing and adapting.

People with PTSD may experience triggers in everyday life that can make their brains relive their trauma, even if it was decades ago. Whenever this happens, the brain can undergo the same damage it did the first time it encountered the traumatic event. The intensity of these flashbacks can make people avoid anything that might set them off — and that, Samuelson explains, can also make those incidents hard to recall, because the person is avoiding them completely.

"PTSD has been linked with changes to brain structures that are implicated in the processing of strong memories, including the hippocampus and amygdala," Sean Clouston, Ph.D., an associate professor of public health at Stony Brook Medicine, tells Bustle.

Specifically, research has found that PTSD affects the parts of the brain that process experiences in context, including the hippocampus and the prefrontal cortex. Dr. Israel Liberzon, M.D., head of the Department of Psychiatry at Texas A&M University and a PTSD researcher, tells Bustle that according to a study published in Biological Psychiatry in 2018, people with PTSD have smaller hippocampus volume, and that different centers in their brains don't communicate efficiently.

"There are several theories surrounding why PTSD is associated with memory deficits," Samuelson says. The first is that people with PTSD use so much of their energy in looking for threats and being hyper-attentive that they don't have enough left over for thinking about the past. "Essentially, there is a cognitive burden of PTSD symptoms that taxes cognitive resources, pulling them away from memory and attention processes."

The second theory is that the issues come from PTSD's damaging effects on the brain. When somebody with PTSD is triggered, Samuelson says, the amygdala becomes over-activated and releases neurotransmitters that disrupt other brain areas, like the hippocampus and prefrontal cortex.

The third theory is that these deficits might not be a consequence of PTSD at all, but a potential risk. "A number of research studies have found that poorer cognitive functioning (including memory) assessed prior to trauma served as a risk factor for the development of PTSD," Samuelson says. "The flip side of that means that having strong memory abilities (as well as other cognitive strengths) can play a role in protecting a person against developing PTSD."

The reality, Samuelson says, is that all three are probably true. "There are preexisting deficits, there is a toxic effect of PTSD on memory, and finally, PTSD symptoms tax cognitive resources which in turn hinders a person’s ability to attend to, store, and recall information."

PTSD's effects on memory can be subtle and far-ranging, but therapy can definitely help, and may make it easier to confront the trauma sitting in the brain's storage areas. Treatment for PTSD includes exposure therapy, which helps people get used to potential triggers so that they don't start reliving their trauma, and cognitive restructuring, which provides the tools for people to approach their pasts without guilt or shame.

More like this
These Are The 3 Most Mellow Zodiac Signs
By Kristine Fellizar
I Visited Remedy Place, The Social Club Transforming The Wellness Industry
By Rachel Lapidos
The 8 Best Pilates Exercises For Lower Back Pain
By Carolyn Steber
All The Muscles You Work When Doing Deadlifts
By Carolyn Steber
Get Even More From Bustle — Sign Up For The Newsletter