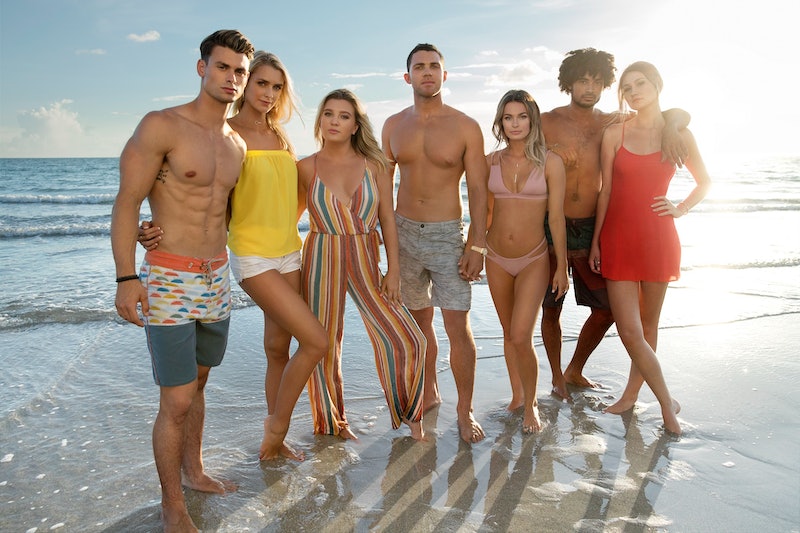 As a Laguna Beach purest, I was both intrigued and skeptical when MTV announced that they would be doing essentially the same concept in a different location for their newest reality series Siesta Key. The series follows a cast of wealthy, impossibly good-looking teens in Siesta Key, which is a tropical paradise in Sarasota County, Florida. The show will tag along with this enviable friend group as they live their opulent lives. But just how opulent are their lives and just how rich is the cast of Siesta Key?

Well, I can say for sure that some of their parents are pretty damn rich. Most of the cast are directly out of high school or their first year in college and are not exactly making six figures just yet, so the wealth they're flaunting is most likely likely coming from their family finances. Trust me, if you were a Laguna Beach fan, then you will feel a little pang of nostalgia here for sure. They may not have Hilary Duff crooning out the theme song, but with the oceanfront mansions, absurdly over-the-top drama, and complete financial freedom to partake in whatever debauchery they choose to, this cast may even top their reality predecessors' bank accounts. Here's how this ensemble is living:

According to Rolling Stone, Alex's father Dr. Gary Kompothecras actually set the whole reality series into motion, because he thought his son and his son's pals were so interesting, they just had to have their own show. Dr. Kompothecras is a chiropractor who founded ASK-GARY, a medical/legal hotline. In 2016, their $12,613,900 home in Sarasota, Florida was featured in Sarasota Magazine at #10 on the Top 20 Most Expensive Homes in Sarasota, where he lamented that people often wander into their front door because "they must think it is a hotel." So, he is that rich.

Brandon is a working model, which is not at all shocking. He signed with Click Model Management in New York when he was still in high school and ended up forgoing college to pursue music and other ventures in the entertainment industry. Recently, he appeared in a film that premiered at the Sarasota Film Festival called, “The First Time Club”, which also used his song “Different Persona” in the soundtrack. As a working model, he seems to be bringing in some money with all of these endeavors affording him a Cadillac for his first car. It isn't clear whether he bought it for himself or it was a gift from the 'rents but either way, that is not a cheap ride.

Chloe is being touted at the rabble rouser of the group and her MTV bio warns that you don't want to be on her bad side. According to the Bradenton Herald, Chloe is attending cosmetology school in Sarasota at the moment. One look at her Instagram will give you the impression that she is living carefree when it comes to finances. Just look at this particular photo with no shortage of cars and a palatial estate behind her. According to her Instagram, if she's not dressed for a big night out in a gown, she's traveling — all of which sounds like it costs a pretty penny.

Garrett has forged quite a successful personal training business for himself, which no doubt brings in money for the reality star. According to his website, Garrett Miller Fitness offers personal training services as well as meal plans and personalized fitness services ranging from $99.99 to $350. Not bad if you're considering how many people are probably interested in working with him post-show release.

But Garrett isn't only about money going into his own pocket. While we don't know what the Siesta Key's star's net worth is, we do know that he works to raise money for good causes. According to a events page for the Blaze of Hope organization (an organization "providing financial assistance to families of children with a life-threatening medical condition while hospitalized"), Garrett guest bartended to raise funds for the organization in February 2019.

Juliette's MTV bio says that she went to college, but it doesn't give much more information about her career situation than that. Her Instagram tells the story of boats, vacations, and generally living large — at one point with a familiar reality face. According to People, Juliette was linked to Bachelorette star Robby Hayes, though the magazine said in July the two reportedly broke up. She did, according to People, attend the now infamous Stagecoach music festival where much of the 2019 Bachelor in Paradise drama went down.

As far as how much money Juliette makes, she has worked with FabFitFun in the past, which is definitely one way to find an income. Helicopters aren't cheap, you know?

Kelsey is legitimately an international model, according to her MTV bio. She recently came back to Siesta Key to care for her ill mother and it doesn't look like she is struggling financially. Kelsey's Instagram is full of lavish vacations, luxury shopping sprees, and fanciness of the highest order. According to Kelsey's LinkedIn, she is earning a degree in marketing at the State College of Florida, which she has already shown herself to be a pro in. Per her bio on LinkedIn, she strives "to continue to build my own personal brand while helping others in the process along the way."

Madisson just graduated from college with an engineering degree, according to her MTV bio. Per Glassdoor, entry level engineers can make somewhere within the $60,000 to $90,000 salary range, so if Madisson is putting her degree to use, there's no doubt she's financially stable.

As you can see, the cast of Siesta Key is in no way hurting financially. If you take into account the money they're making from the show, too, fans will find no shortage of helicopters and opulent hotels on this bunches' Instagram accounts.

More like this
Silvio Scaglia Is Wealthier Than 'My Unorthodox Life' Star Julia Haart
By Radhika Menon
What Is Julia Haart’s Net Worth? The My Unorthodox Life Star Is A Shoe Mogul
By Radhika Menon
Mike Tindall’s High Earnings Amount To A Royal Flush
By Darshita Goyal
Chris Moyles Is One Of The Richest 'I'm A Celeb' Campmates
By Sam Ramsden
Get Even More From Bustle — Sign Up For The Newsletter

This article was originally published on Aug. 7, 2017