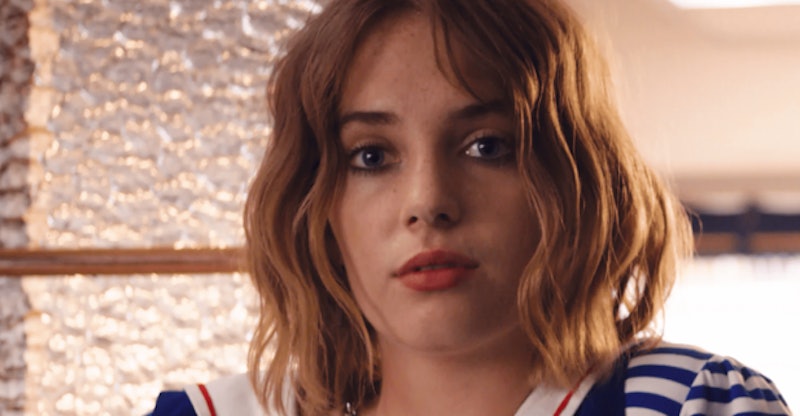 Spoilers ahead for Stranger Things 3. Stranger Things may lean on '80s aesthetics and nostalgia, but that doesn't mean its characters and ideas should be outdated, too. In its third season, the show finally takes a step toward fixing its long-standing representation issue by introducing its first openly queer character in Stranger Things 3's Robin, Steve's spunky, sarcastic Scoops Ahoy coworker. And not only does she add long overdue perspective to the series, she upends a classic rom-com cliché in the process — one Stranger Things has often indulged in itself.

When Robin is first introduced, it feels like an obvious set-up for Steve. He's still clearly bummed about his breakup with Nancy, and his and Robin's relationship has all the usual high school romance tropes: studious band geek clashes with popular jock. They're thrown together into some difficult situation where they have to learn to put aside their differences; they hate each other, until suddenly they don't. It's a rom-com plot so ingrained in our society that Dustin takes every opportunity to nag Steve to date Robin.

We've seen this same set-up before with practically all the other female characters. Stranger Things is guilty of introducing women only to pair them off with a male love interest, or worse, to put them in between two squabbling men. And while all the Stranger Things women are strong in their own right, their stories have also always hinged upon their romantic viability to the men around them.

Nancy was introduced in a love triangle with Steve and Jonathan, and Max had the same for Dustin and Lucas. Eleven has always had Mike, and even Dustin now has Suzie. In Season 2, Joyce had to contend with both Hopper and Bob, and in Season 3, Murray is constantly bringing up her and Hopper's unaddressed feelings for each other. Season 2 ended with a scene at a school dance featuring only opposite sex partners, and Season 3 was about exploring the kids' blossoming romances as they come into their adolescence. The show has been, up until this point, pretty aggressively straight.

It's significant, then, that Robin subverts a scene initially set up to be romantic with Steve. After escaping a near-death experience at the hands of the Russians and hiding out in a movie theater bathroom, Steve confesses to Robin that he's finally over Nancy because he's met somebody who he clicks with better: her.

"I’m not like your other friends," Robin says at first, trying to skirt around the issue (either to spare Steve's feelings or because she's scared to reveal herself). "And I'm not like Nancy Wheeler." When it doesn't quite set in for Steve, she launches into a lengthy explanation, finally adding context to an earlier statement that many likely read as her having a crush on Steve:

"Do you remember what I said about Click's class, about me being jealous and like, obsessed? It isn't because I had a crush on you. It's because she wouldn't stop staring at you...Tammy Thompson. I wanted her to look at me. But I couldn't pull her eyes away from you and your stupid hair. And I didn't understand, because you would get bagel crumbs all over the floor. And you asked dumb questions. And you were a douchebag. And—and you didn't even like her and...I would go home and just scream into my pillow."

"But Tammy Thompson's a girl," Steve finally says, being, you know, Steve. When Robin reaffirms what she said, Steve pauses. At that point Steve could say any number of things, but instead of making a big deal out of it (or worse, getting angry), he waits a beat before gently teasing Robin. "Tammy Thompson, you know, she's cute and all, but I mean, she's a total dud," he says. It immediately breaks the tension, and the two go back to bantering. The relief is clear on Robin's face.

It's a sweet, meaningful moment because it finally adds dimension to a relationship that was initially hard to define. Robin was introduced without fanfare, and it wasn't clear how integral of character she would become. We knew Robin was incredibly smart and clever, but because we mostly saw her through the lens of Dustin and Steve, it was hard to get a read on her. After she reveals such an intimate part of herself, we finally see Robin for who she is as much as Steve does. For the first time, not only do we get a queer character, but we get a woman who is not defined by her romantic relationships to men. She gets to be just Robin.

In the end, Robin has a positive effect on Steve as well, and the final scenes show that they've become best friends. The fact that Robin helped in the final battle and formed ties to all the kids cements her as a main character, and we're likely to see her return in Stranger Things 4 being as delightfully snarky as ever. In a time when LGBTQ representation is slowly but surely increasing in media, it's nice to see Stranger Things finally catch up with the times — even if it is, technically, still stuck in the '80s.

More like this
'Stranger Things' Season 5 Will Echo Season 1 In A Key Way, The Duffer Brothers Confirm
By Kadin Burnett and Sophie McEvoy
Does 'Locke & Key’s Ending Mean There Could Be A Season 4?
By Sophia Moore
'The Sandman’s Ending Is A Departure From Neil Gaiman’s Comic Book Series
By Kadin Burnett
‘Stranger Things’ Stan Megan Thee Stallion Grilled Natalia Dyer About Nancy & Steve
By Brad Witter
Get Even More From Bustle — Sign Up For The Newsletter