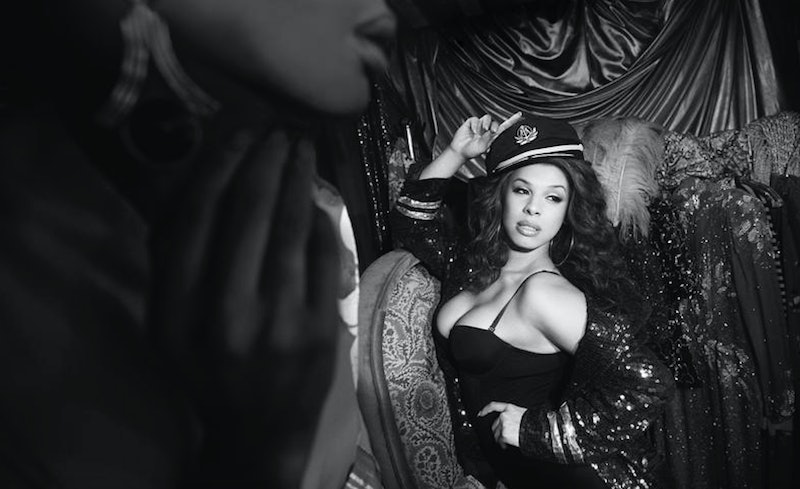 For transgender actor Hailie Sahar, landing roles in Hollywood wasn't always a pleasant or easy experience. If she wasn't sexually harassed in the casting process, she was hired as the trans actor or the "other." Yet today, Sahar is starring on Ryan Murphy's new TV show Pose, a dance musical that spotlights NYC life and ball culture in the '80s. It's a series unlike anything the television landscape has ever seen — and, according to Sahar, it's making the interworking of Hollywood safer for trans actors.

"This is something new," says Sahar about Pose, speaking over the phone shortly before the show's June 3 premiere. "Things I've done before — Mr. Robot, Transparent — those were great experiences, [but] it was more so, I'm just here by myself... that one role of a transgender person."

Pose, however, has the largest cast of transgender actors ever on scripted TV; there are five as series regulars, including Sahar as Lulu, a mysterious and fashion-obsessed woman. For the actor, the importance of being among multiple trans actors in a major TV project — not to mention many trans crew members, as Sahar notes — can't be understated.

Sahar has always been passionate about acting, but in the past, getting roles meant having to overcome obstacles and discriminatory stereotypes. When people in the casting process found out she was transgender, they'd often make inappropriate gestures and ask for sexual favors. "The thing about being transgender, there's this stigma, this idea that they're over-sexualized people," Sahar explains.

Her personal struggles are reflected on-screen in Pose. "From the murders to families not accepting their children, abandonment... I can relate," the actor says. "I'm a preacher's kid... you can't even imagine what I had to go through to be who I am today."

Now, Sahar says she feels a "sense of duty" as a trans role model to do right by others who may also be struggling. According to the actor, viewers from any walk of life can appreciate and feel moved by Pose due to its universal (and timely) message. "We get so caught up in the superficial things, the money, the fame, status," says Sahar. "But at the end of the day, all the stuff, all the fluff, all the politics, the bickering and back-and-forth, it really, really, really doesn't matter as far as what's the most important thing. The most important thing is love."

And for Sahar, getting to live out her childhood dreams with Pose is a reason to feel grateful and celebrate. "No matter what my gender, color is, inside me is the girl who wants to be an actress just like any other girl," she says. "Like anyone who has a dream. I've always played in my mom's clothes and wanted to be just like my mom."

When it airs on FX, Pose will undoubtedly bring people of all kinds together. No matter their backgrounds or experiences, everyone feels pain and everyone feels joy, and the show gets into the heart of that truth. "Once we leave this earth, that's it. All that matters is loving each other," says Sahar. "[Viewers] can identify with that in their hearts. That's what I hope."

Despite their differences, most people really just want the same thing — and Pose makes that crystal clear.