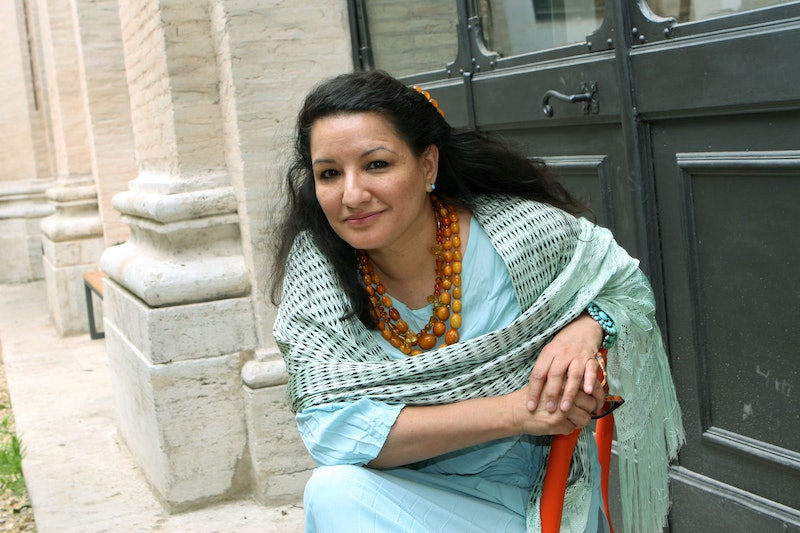 I first picked up Sandra Cisneros's The House on Mango Street in the summer of 1998. I was nine years old, just two months away from starting the 6th grade, and I was attending an advanced summer class with middle school students from across the city. As one of the youngest there, I was worried that I wouldn't be able to keep up with the other kids, and I arrived at orientation feeling more dread than excitement. Then I met Esperanza Cordero. The House on Mango Street was our assigned reading, and as I devoured the novel, I realized that this was the first time I'd read about a girl with a last name like my abuela's, who lived in a neighborhood like mine. Esperanza's story felt like home.

Since its publication 35 years ago, The House on Mango Street has become one of the most influential works in modern literature. It has sold over six million copies and been translated into over 20 languages. And for many Latinx readers like me — including authors Elizabeth Acevedo, Angie Cruz, Kali Fajardo-Anstine, Lilliam Rivera, and Erika L. Sánchez — that influence is personal.

"It was one of the first times I’ve ever felt seen," Erika Sánchez, the author of National Book Award finalist I Am Not Your Perfect Mexican Daughter, tells Bustle. "Her neighborhood was so similar to the one I grew up in — full of both beauty and despair. The way that Cisneros was able to capture and celebrate Mexican culture was so magical to me."

Written in a series of poetic vignettes, Cisneros's seminal work follows Esperanza as she comes of age in Chicago in a primarily Latinx neighborhood. She struggles with her family's poverty, her desire to find a space of her own, and the plight of growing up as a young woman in a world where danger and disappointment seem to lurk around every corner.

"Cisneros taps into the truth of what so many Latinx young people and their families face," Elizabeth Acevedo, author of the National Book Award winner The Poet X, says. "She is honest about language, neighborhoods, aspirations, and so many other themes and truths that are not only universal but timeless. You can tell Cisneros loves her characters and that she loves her reader. That kind of care and respect means she doesn't write stereotypes, but she also isn't going to sugarcoat people or experiences. When you read Cisneros you trust her."

"The way that Cisneros was able to capture and celebrate Mexican culture was so magical to me."

Cisneros's influence on her readers has only grown over the last three and a half decades; she has written eight additional books and won several awards, including the 2015 National Medal of the Arts and the 2019 PEN/Nabokov Award for Achievement in International Literature. But it is The House on Mango Street that has achieved near legendary status among its readers, described by many as a crucial link in the chain of Latinx women across generations.

"For the most part, the books in my house were hand-me-downs from my older cousins," Lilliam Rivera, author of Dealing in Dreams, says. "I was 11 years old when I picked up The House on Mango Street. My cousin had scribbled down notes and highlighted passages on most of the pages. Not only was I discovering Sandra Cisneros's captivating protagonist Esperanza, I was also following a conversation my older cousin was having with the text. The book became an insight to three young person’s journeys into adulthood, both within the prose, within my cousin’s life, and my own relationship to both. It truly became a collective discovery."

While The House on Mango Street is undoubtedly hopeful — "I think that Sandra has been able to describe the singularity of Mexican culture: The traditions, the joy, and the humor. There is so much merriment in our community the rest of the world often doesn’t get to see," Sánchez says — it is also an unflinching portrayal of life for Latinx people in the United States.

"For me, Cisneros's work often functions as an amulet to bring forth memories I have forgotten, aspects of the self which were once only shadows," says Kali Fajardo-Anstine, author of National Book Award finalist Sabrina & Corina. "Cisneros has allowed me to remember and to imagine the self, to expand what it means to be in this body and in this place. [Her] work burrows deep into the subconscious, for it draws from the well of universality, that place where all truth resides."

"The book became an insight to three young person’s journeys into adulthood, both within the prose, within my cousin’s life, and my own relationship to both. It truly became a collective discovery."

One of the most universal — and celebrated — aspects of Cisneros's novel is its raw depiction of the suffocating nature of toxic masculinity. The novel is peppered with physically and emotionally abusive fathers and husbands, women who feel trapped under the expectations of their home lives, street harassment, and sexual violence. In her award-winning debut novel The Poet X, Acevedo wrote extensively about the effect of the male gaze, and she says Cisneros's work was eye opening.

"The scene where Esperanza is at work and is assaulted is one I remember that stopped me in my tracks, and to this day I remember it vividly," Acevedo says. "There were so many ways that sexual expectations were thrust on me as a young person: the idea that a boy or man was allowed to grab me, or talk to me however he pleased, and it was my responsibility to circumvent his requests or disrespect in a way that didn't anger him and also kept me safe. Seeing that kind of encounter written down starkly and unflinchingly made it seem like I was less alone."

Rivera, who in her own debut novel, The Education of Margot Sanchez, explores gentrification and class disparity, recalls Cisneros's messages about poverty as equally affecting.

"There is a scene where Esperanza and her family get in the car and drive around the affluent sections of Chicago and wonder what they would do if they won the lottery," Rivera says. "I remember reading this and feeling so seen. Although my family never owned a car, whenever we took the train from the Bronx to Manhattan, we always imagined what our life would be like if we lived in 'the city.' I was obviously aware of class at a young age, but this was the first time I read about poverty through the eyes of a young brown girl."

The House on Mango Street has burrowed into the hearts of these authors — and millions of others — for many personal reasons. But it has also been a source of creative inspiration for Acevedo, Cruz, Fajardo-Anstine, Rivera, and Sánchez, who are helping Cisneros to carry the mantle of Latinx literature ever forward.

"For me, Cisneros’s work often functions as an amulet to bring forth memories I have forgotten, aspects of the self which were once only shadows."

"The book is masterful and frankly, what Sandra does with language is incomparable," Angie Cruz, author of Dominicana, says. "Because of its slim size and short vignettes some assume it’s an easy read, but it’s very layered and the language and characters are charged and powerful. Sandra’s book is a feast, because one can peel back the layers in the text and get punched in the gut in the best way. When I read her books, I understood how the more specific one is, the more universal the work becomes."

Cisneros, now 64 years old, continues to publish new work (her most recent short story, "Puro Amor", was published in 2018) and champion up-and-coming Latinx writers — including writing blurbs for books like Fajardo-Anstine's and Cruz's 2019 releases. Cisneros cemented her place as a crucial voice in literature long ago. But to truly celebrate her impact, one must also celebrate the voices of all who have come after her.

"The ways Cisneros explores the inner lives of Latinas of all ages provides an internal map to chart our own experiences, to name what we have faced for generations," Fajardo-Anstine says. "Within her sentences, entire lives of women are honored. Sandra Cisneros’s work allowed me to see the power in my culture’s storytelling tradition, and the power within myself."