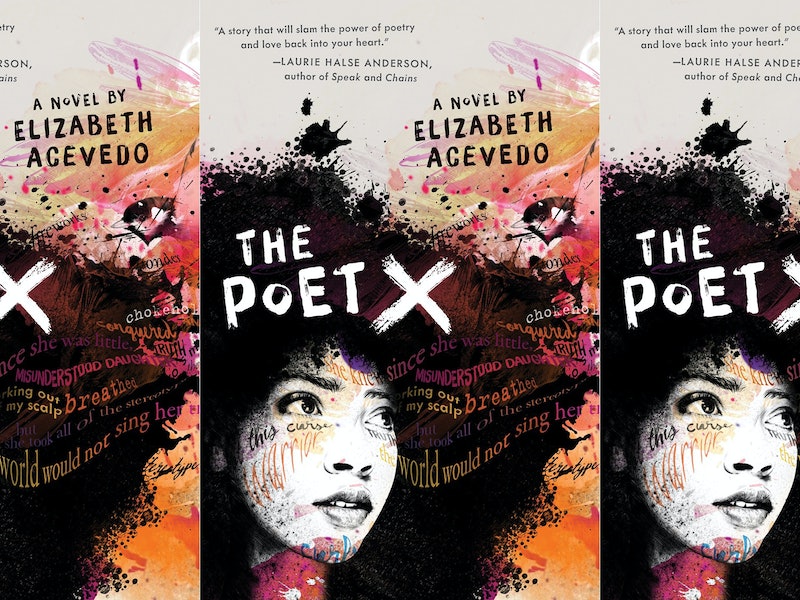 Young adult author Elizabeth Acevedo has been a performing poet for over 14 years, but it was her work as an eighth grade English teacher that first inspired her to write her debut novel The Poet X. Acevedo's students were primarily Latinx, and she realized that the books and poems she was teaching them in class didn't necessarily line up with their life experiences. So she combined her love of writing with her love of performing for a story that not only her students could relate to, but that she could, too.

"[The main character] Xiomara’s family experience is informed by a lot of families I saw around me and the community I come from, where men were present but didn’t always know how to be involved fathers, and mothers were the true heads of household, but didn’t always know how to encourage their children to talk to them," Acevedo tells Bustle. "So, I think the family was cobbled together from my own experiences growing up and the experiences of my friends, and classmates, and cousins, and community."

The Poet X follows Xiomara, a teen girl from Harlem who is struggling with her body image, her strict mother's religion, her evolving relationship with her twin brother, and her first experience with romance. Desperate for an outlet through which she can channel her emotions, she begins to pour everything into the pages of a leather notebook, penning emotional poems and verses about her life. But Xiomara knows that these thoughts are best kept to herself, especially since writing about her body and sex and creativity doesn't exactly line up with the laws of the church that her mother is forcing her to obey. But will an invitation to the slam poetry club at her school change everything? All Xiomara knows is that she can no longer be silent.

"So, I think the family was cobbled together from my own experiences growing up and the experiences of my friends, and classmates, and cousins, and community."

And although many of Xiomara's experiences are very specific — living with a physically and verbally abusive immigrant mother who wields religion as weapon, as well as an emotionally absent father — it would be hard to imagine anyone not relating to her in some way. Throughout the book, X grapples with street harassment and the sexist patriarchal structures of the church — struggles which are all-too-familiar for many women.

"I think we are in a critical moment in time where we are beginning to challenge, no longer subscribe to, [and] question certain institutions — the Catholic Church, Hollywood, political office, professional and collegiate sports, executive management — that have kept the status quo in power at the sake of women’s well-being," Acevedo says. "For me, it was particularly important to focus on a girl of color who has had to learn her womanhood through a complicated upbringing; Xiomara is strong, ambitious, and smart, but she has not always had room to be vocal about her pain. The community she is a part of creates an environment where she is harmed often, both psychologically and physically, but it is through the resources offered and found in that same community that she is able to advocate for herself and raise her voice."

It's through this community of art that Xiomara begins to discover her true self, artistically and otherwise. But it's not only her creative pursuits that Xiomara has to hide from others — it's love, too, with new student at her school, Aman. But readers who are worried that Xiomara's story arc will be reduced to a boy savior narrative need not be concerned. Acevedo has weaved romance into the plot in ways both realistic and relatable.

"For me, it was particularly important to focus on a girl of color who has had to learn her womanhood through a complicated upbringing; Xiomara is strong, ambitious, and smart, but she has not always had room to be vocal about her pain."

"From the beginning, I wanted to write a love interest who was genuinely a good guy, but who was never the center of the story. Someone flawed, but supportive," Acevedo says. "I think young love can be complicated, because young people tend to fall back on the examples of relationships they’ve seen, however dysfunctional. But I wanted to write a love story that was authentic: of two teens listening to each other, dreaming with each other, supporting each other, and failing and trying again, without ever buying into their love needing to last a lifetime. Xiomara was always going to be her own star player, and Aman was always going to be loudly cheering her on from the sidelines. I’m glad that came through."

Because for Acevedo, the most important, and powerful, aspect of The Poet X is exploring the idea that art and using our voices creatively, has the power to change not only ourselves, but the way we relate to others, and our lives as a whole. And she hopes that teens who see themselves in Xiomara's story will be inspired by her to find an artistic outlet in their own lives.

"I think every single person, regardless of what they want to do in life, should write creatively and should read creative writing.," Acevedo says. "Studies show that people who engage in the creative arts are more empathetic, and now more than ever, we need more empathy in the world. Young people especially have a lot to say and they don’t always have a lot of avenues in which to say it, so a poem or short story or rap verse or ballad gives them a necessary outlet. One of the most important things for me, and my main character, was finding a community of writers at a young age."

In The Poet X, creativity equals power, or at least an increase in autonomy. And in a world where marginalized people are continually silenced and denied equal opportunity, encouraging young people to fight back.

"Power is never simply handed over to disempowered people. I fundamentally believe that," Acevedo says. "So how do we tell some of the most vulnerable members of our society, young people, that they can demand respect and equal standing in the world? I hope this story is a small slice showing how one girl used what she had to make her life a little bit more what she deserved."