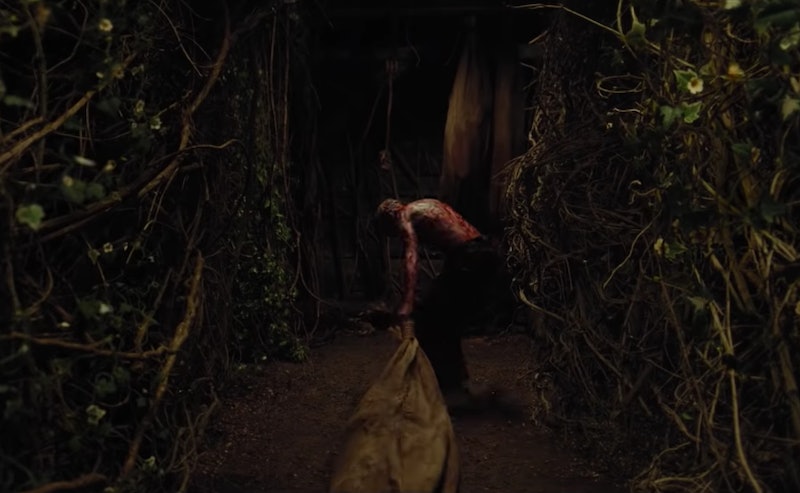 British folk-horror is BACK, baby! And this time it's got a heavy dash of modern obsessions nestled alongside the "old ways". Director Garth Evans (The Raid) is best-known for his kinetic martial arts films, and though brutal and bloody in its own way, his latest movie seems a world away, but how scary is Apostle on Netflix? Spoilers ahead. Half the horrors of the film could easily be labeled "living at the turn of the century." The realities of farming, raising animals, and treating maladies, all with limited access to medical treatment or modernity, make day-to-day existence brutal and terrifying even before throwing in the intense social interdependence of a small, isolated community, or strange worship of a "goddess".

The film opens in 1905. Embittered young man Thomas Richardson (Dan Stevens of Downton Abbey) is asked by his estranged family to infiltrate a religious sect and rescue his sister, kidnapped for ransom. The strange journey he takes discovering the beating heart of the cult and their island forces him to reckon with his own past. For a film where the human horrors outweigh some very real supernatural scares, it's mostly a psychological slow-burn (the scariest kind of film, in my opinion), but gore hounds won't be disappointed.

Similar to The Witch, where a fringe-religious group's shunning of a puritan family emphasizes the razor's edge of survival, and then throws in the supernatural on top of desperate historical living, Apostle doesn't drop the outright fantastical until well into the film. Richardson's smoldering rage reads before he even steps on the boat, floated out to an island founded by three prison escapees who decided to build a utopia where they'd found refuge. Heretically worshipping an island goddess, the community claims to be truly free, without taxes or judiciary, where an honest day's work earns you equal citizenship and needs met.

But as Richardson notices immediately off the boat, the community has an unspoken rule of law, and is as rotten inside as the blighted crops covering the island. Secret enforcers and suspicion rule the land, and the strange religious bloodletting suggests larger unseen sacrifices. Villagers bear mute witness to disappearances and punishment, partly out of fear, partly out of hope for survival, their willful ignorance a better alternative than facing the real truth of their society's existence.

A few, including medically-trained daughter of the founding preacher Andrea (Lucy Boynton), are willing to speak up, but trapped within the community and bound by blood and friendship, there's little they feel they can do. Andrea goes a step beyond in helping Richardson, but others, like a founder's son in an extramarital relationship, have to be blackmailed to rise above their fear of social betrayal. And then, the island goddess makes an appearance.

Richardson has an acrimonious attitude towards belief of any kind, but even he can't deny seeing the eerie figure of a wizened woman who appears to him, leading him towards the center of the island's dark forest. Without spoiling anything, the banal human evils committed facing actual powers beyond understanding feel all too modern. We live in an age filled with miracles, but most are bent towards the basest and most commercial enterprises without appreciation.

The real terror at the heart of Apostle is that the same human selfishness portrayed is still happening, without even an island to try and escape from it.

More like this
These 25 International Horror Movies On Netflix Prove Fear Is A Universal Language
By Bustle Editors
12 ’90s Movie References You Missed In 'Do Revenge'
By Radhika Menon
What’s New On Netflix: Ana De Armas’ 'Blonde' & A Nick Kroll Special
By Arya Roshanian
Here’s Everything Coming To & Leaving Netflix In October
By Jake Viswanath
Get Even More From Bustle — Sign Up For The Newsletter