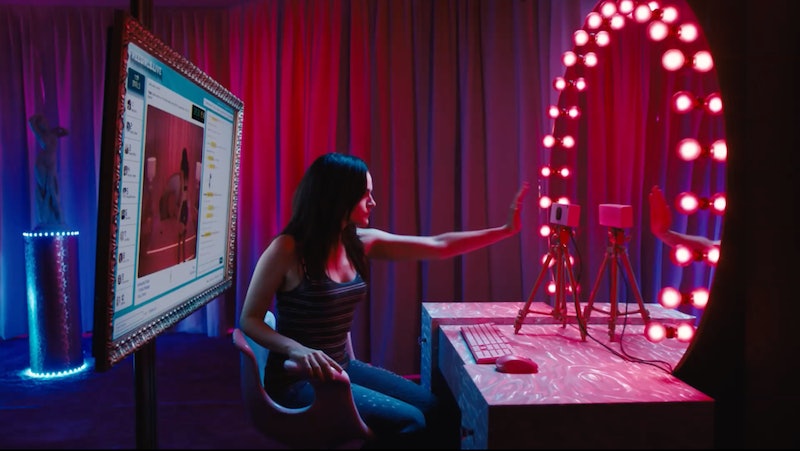 A young woman logs in, only to find she's already logged in. Her exact doppelganger is performing as herself, and aside from small differences violating her own personal boundaries, no one seems to notice or understand. That's the plot behind the new psychological thriller CAM, coming to Netflix on Nov. 16, but just how scary is CAM? Let's just say you'll think twice before ever creating a burner account again.

Exploring a different type of body horror, CAM manages the astounding feat of prominently featuring female bodies without feeling like its exploiting them, in a movie about and centered around cam girls. For those unfamiliar, camming could loosely be defined as any live interaction via webcam ("camming with my boyfriend," for example), but frequently describes a particular type of live, interactive sex work where models, also known as cam girls, chat to and perform for rooms of users who type in requests, comments, and offer payment in the form of tokens.

CAM focuses on Alice (Madeline Brewer), a young woman in a small town who keeps her real life and online identity very separate. Performing as "Lola" she comes up with shows to engage her roomful of regular tippers and draw in new viewers. Competition among cammers for popularity and tips is fierce, but Alice is determined to crack the top 10 with Lola, veering into some genuinely creepy territory to startle her viewers and carve out her own niche. Novelty is one form of currency in this world; sexuality's another, but not as large a component as you might think — part of CAM's ingenuity is presenting Alice and the other cam girl's work as just that — work.

For anyone who's put effort into building followers on YouTube, Twitter, or any other form of social media, Alice's struggle is immediately identifiable, and that's where the real horror of CAM begins. One day Alice finds herself locked out of her account... only to find Lola is streaming live. Someone, or something, has taken over everything Alice's worked for, and there's little she can do besides watch helplessly. As this article from The Atlantic points out, the lag in laws protecting online interactions and identity are immense, and many women who contact the police for help experience the same level of humiliation and vague threat Alicev does, including ending with the useless suggestion to "just stay offline."

The worst part of the ersatz Lola is her eroding the boundaries Alice so carefully built up. She breaks all of Alice's rules, including never telling viewers she loves them, talking about Alice's real-life family, and even bringing the camera outside the carefully staged room Alice uses for cam work into her real house, all leading to real-life consequences for Alice. The creepiest scenes in the film are those where Alice watches her non-self take away Alice's sense of safety and bodily autonomy; it's the violation that horrifies rather than any gore.

The horror genre's notorious for using female bodies for voyeuristic pleasure and sadistic punishment, but CAM's occasional nudity feels natural, a part of the work environment. When Alice visits a cam house where women of all types share resources and perform safely it seems too ideal, fake even. But as this thorough article on camming in The Stranger notes, such places do exist.

Without spoiling too much, the film's few instances of bodily horror are self-inflicted, a way of personally taking back power instead of losing it at the hands of a masked proxy for social sexual anxiety. They're brutal, but the majority of CAM's terror is purely relatable — fears we all face in a world gone very online, where the majority of us have one or more identities across the web. CAM explores questions and concerns about who and what we're performing, who we present ourselves as and what effect that might have on who we consider ourselves to be, about the boundaries each of us draw with how much we're willing to share with an anonymous (and potentially vicious) audience, and the effect of that audience on how we behave. The answers will make you think twice next time you log in.