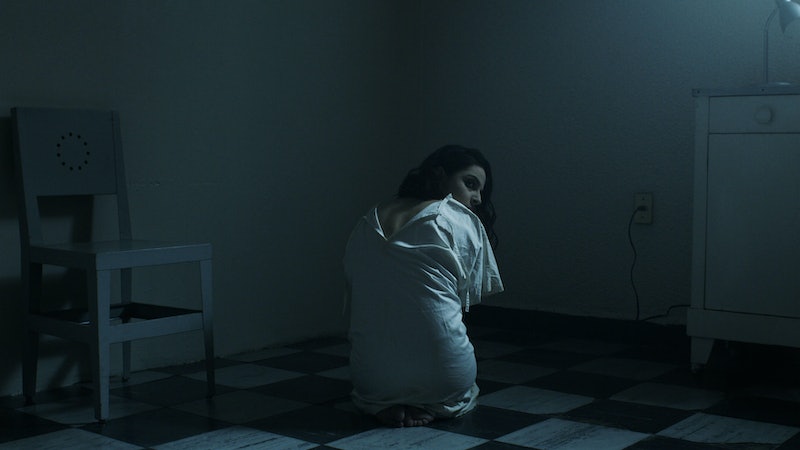 Netflix's Diablero, premiering Dec. 21, transports viewers into a version of Mexico that has been abandoned by God and overtaken by demons. But while such a premise sounds quite terrifying, the show seems far more interested in thrills than scares. There are certainly some screams to be had while watching the new supernatural thriller, but those hesitant about starting the series because of how scary Diablero could be should give it a chance — if you can handle some shocking imagery, that is.

While Diablero is rife with demons and monsters, it's not quite horror. It's more of a dark fantasy thriller in the same vein as shows like Buffy The Vampire Slayer and Stranger Things. Yes, both of those shows have concocted some genuinely unsettling creatures, but they're more about action than jump scares. Comparatively, a true horror series such as recent Netflix hit The Haunting Of Hill House puts much of its focus on scaring viewers and putting its characters in absurd and creepy situations, free of any semblance of fun and dedicated to both physical and emotional terror. The core narrative drive of Diablero, on the other hand, follows its main characters — a priest, a demon hunter, and a superhero, all of whom presumably walk into a bar at some point — riding around Mexico in a vintage Chevy and fighting demons with a side of clever commentary. It may be scary, but it seems that Diablero is putting a heavy emphasis on creating some levity within a dark environment.

Diablero reimagines Mexico as a post-apocalyptic hellscape — literally. Now overrun by demons, the Mexico we know today has been transformed into a world in which entertainment means witnessing a cage match between creatures that appear to be towering bipedal toads and horned demons masquerading as humans. This isn't even the peak of Diablero's weirdness, as one character warns in the trailer, "Better get used to it, because things will only get freakier." Granted, the possibilities of how much freakier things can get when demons have invaded the planet are horrifying, but the show itself doesn't seem as interested in exploring that horror as much as it is hitting that horror in the face.

As far as genuinely terrifying imagery that isn't related to the Del Toro-esque demons that popular the world of Diablero, there doesn't seem to be anything much scarier than a typical horror film — that is to say, there are plenty of images of people with pale skin and stringy black hair, empty eyes, human jaws that open far wider than intended, and an unsettling amount of razor-sharp teeth. But while Diablero may have some frightening imagery, it uses that fear and terror as an excuse to burn rubber and throw punches. Diablero won't be ideal for those who would rather enjoy a serene or muted drama, but anyone who is looking for an action-packed road trip through hell is sure to be delighted by all that Diablero has to offer.