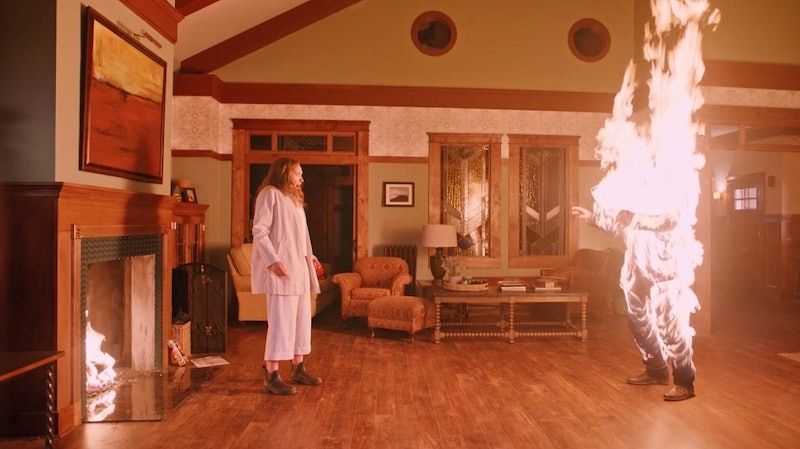 Hereditary, the first film from director Ari Aster, has already earned a reputation for scaring audiences beyond belief. The movie is being considered one of 2018's must-see flicks, but if you're not the best with on-screen terror, you might want to sit this one out. Yet horror buffs wondering how scary is Hereditary are in for a treat; critics are already proclaiming it "this generation's The Exorcist."

If the movie was just a gripping, honest portrayal of a family working through the trauma of loss, that would already be intense enough. But there's something darker at the edge of Hereditary's frames, as hinted at in the movie right from the beginning. As noted by its title, the film features a truly disturbing family relationship in which members might be passing along more than generational emotional burdens.

But none of what might be loosely termed more conventional horror, including jump scares, ghosts, and gore, would have any effect in Hereditary beyond a brief jolt if it weren't guided by the audience buying in to the family's pain. As A.A. Dowd of The AV Club emphasizes, Hereditary "isn’t a scary movie. It’s pure emotional terrorism, gripping you with real horror, the unspeakable kind, and then imbuing the supernatural stuff with those feelings."

Without the feelings, the horror would be standard grade, and without the horror, the feelings would be compelling, but not the stuff of nightmares. By putting all those things together, Aster has created a uniquely potent combination that's bound to send audiences reeling. And critics have already taken note. As noted by Nerdist's Kyle Anderson, Hereditary gained rave reviews during its Sundance debut, although the festival's audiences were certainly scarred by the movie they sat through. Watching Hereditary, noted Nerdist, was a truly disturbing and entertaining watch — "at the center is the sense that nothing will be OK."

Ah, the delicious combination of existential-terror and shocking-terror, a perfect black hole of a film with a void of feeling good at the core. Hereditary star Toni Collette has said that just making the film took a major emotional toll on her, and that's no wonder. Speaking to The Daily Mail, the actor described one scene in particular as, "almost like a dam has built up, and she’s sitting with all of this pain, and eventually explodes. Collette added that after shooting it, she "really needed to go off to the gym and just run on a machine. I really needed to shift the energy. I didn’t want it hanging over me." At the same time, the actor also said the writing was so good she'd join on for a second film in a heartbeat.

Pushed away by the disturbing extremity of emotion, and pulled in by quality; that's what audiences are in for. So if you're thinking of checking out Hereditary, prepare to be terrified by a higher caliber of horror than you've probably seen any time recently.

More like this
How To Stream 'Bodies Bodies Bodies'
By Morgan Leigh Davies
Christina Perri Reacts To Her 'Twilight' Song Being One Of YouTube's Most-Viewed Ever
By Radhika Menon
Someone Must Pay For What Happens To Bad Bunny In 'Bullet Train'
By Arya Roshanian
At 14, Rachel Sennott Had A Sexual Awakening While Reading 'Twilight'
By Samantha Leach
Get Even More From Bustle — Sign Up For The Newsletter