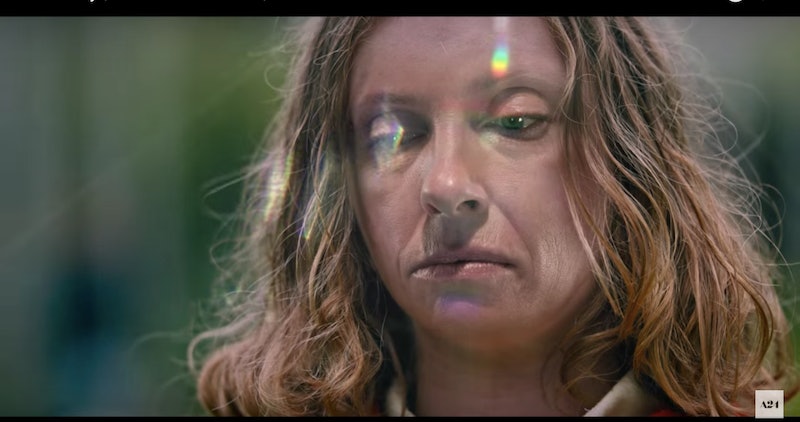 This summer, things are going to get very scary. Don't believe me, just watch the trailer for Hereditary. And definitely don't think about watching it with the lights off. This terrifying movie that haunted the the 2018 Sundance Film Festival, is the first from writer and director Ari Aster, and looks at the true horrors of losing a family member. If you need a another clue to what scares you can expect, this movie comes courtesy of the producers who gave you the scariest female empowerment movie ever, The Witch, and M. Night Shyamalan's 2016 film, Split.

Out of Sundance, The A.V. Club has said that they can't "imagine seeing a more frightening movie this year," and Vanity Fair said that there's "no shot in the film that isn’t filled with creeping dread." The horror movie, out June 8, stars Toni Collette as Ellen, a woman who's grieving the loss of her mother, who she says was very difficult and very secretive. So secretive in fact that when Ellen delivers her eulogy she mentions that "it's heartening to see so many strange new faces" there to pay their respects, though she'd imagine her mom would be suspicious. No surprise, things only get stranger from there.

While Collette's Ellen is trying to keep things together, the rest of her family is falling apart. Her daughter (Milly Shapiro), who was her grandma's favorite — "Even when you were a little baby, she wouldn't let me feed you because she needed to feed you," Ellen explains — is scribbling Edward Gorey-style portraits of her granny in her notebook and cutting off the heads of pigeons for sacrifices. It's all making Ellen rather uneasy and it's a clear sign that the audience should be, too.

Other signs that this grandma might have had a sinister side is Ann Dowd — better known as Aunt Lydia from The Handmaid's Tale — showing up to let Ellen know she can feel her in the room with her. Dowd's line "She's not gone," would be the scariest line of the trailer, if Ellen's daughter doesn't imply that her death is imminent.

The question is, though, which room is Ellen's mom trapped in? Throughout the trailer, Ellen is seen painting dollhouse recreations of her life, complete with scenes of her family and her recently deceased mother. It makes you wonder, how much control Ellen has over this situation or, is her mother destined to wreak havoc on her life?

By the end of the trailer, you'll be no closer to answering that question, but you'll surely have more about Ellen's rapid decline from caring mother to despondent authoritarian. Like, where did all those gross ants come from? Why is that man on fire? Is Ellen really just her daughter? And, how doesn't she already know that her family is at peak stress levels right now? Honestly, you might be too after watching this creepy trailer.

The film attempts to highlight that those demons that are inherited. The ones, no matter how hard a person tries, they can't get away from. They're the things that are determined by birth, which means that saying, "you can't choose your family" is much scarier than anyone ever really knew.

This movie, though, isn't trying to hide the fact that it may lead you to have a serious conversation with your parents about what they've been up to. Uncovering their secrets — or in Ellen's case, finding out more about those "private rituals" her mom was a part of — might be the only way to save yourself.

After watching the trailer you might also find yourself involved in a debate over whether Collette's motherly role in Hereditary is more frightening than being the mother of a kid who can see dead people in The Sixth Sense. From the looks of it, Hayley Joel Osment's character might have come in handy here.