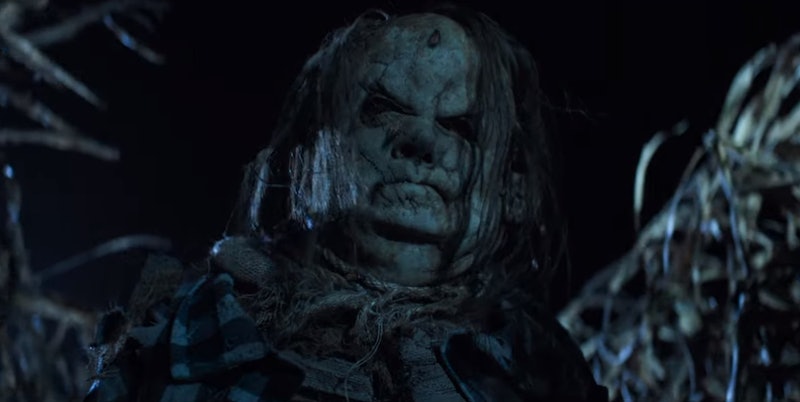 There were many terrors experienced by '90s kids that today's children simply never will have to go through. Listening to the radio to see if school was canceled during a snowstorm only to find that your school was the only one still in operation. Having your favorite cassette get eaten by your tape player. And being scared silly by the horrifying illustrations in the supposedly made for children book series Scary Stories to Tell in the Dark. But now the tables have turned on the youth of 2019, as a movie version of that same book on the way. So how scary is Scary Stories to Tell in the Dark the movie?

It's scary. Though it was ultimately revealed to be aimed at a young teenage audience, the film's first teasers made it unclear just who the movie was supposed to be for. The initial looks at the film were practically indistinguishable from an R-rated horror movie, and it looked so scary that producer Guillermo del Toro offered a clarification at a presentation for the film in March that the movie is indeed intended for family viewing. "The anticipated rating is PG-13," del Toro said, according to Daily Dead. "The idea is the books are a favorite among young readers, and I think that there are two or three generations of parents that know the books, too. So, it's really going to be a ride, but there is a safety bar in it."

Even after Del Toro's initial declaration, people still weren't convinced this was a movie for kids. It just looks so scary. The producer, no stranger to horror himself, added more reassurances in June that the movie was meant to be viewed by children. "We wanted to make a family adventure," del Toro said, according to Vulture. "I want this to be a nice family horror film. Family is horror in itself, but sometimes, with milk and cookies, you can find something nice to watch."

But just because kids are expected to watch the movie doesn't mean it's not still going to be extremely scary. The film's director, André Øvredal, called the film a "nasty horror movie," and stated that its content is intended more for the young adult crowd than little kids. "We didn’t wanna go too young, but we wanted to honor the fact that the books are for a younger audience," the director said, according to Vulture. "We wanted to honor the material and the stories."

Then there's the content of the film, which even if it's appropriate for kids, is scary for any age. The bulk of the anthology film's tales are pulled straight from the book, and contain stories about a spider laying eggs in a girl's face, a boy who eats a corpse's toe and is then stalked by said corpse, and a menacing scarecrow come to life, to name a few. The film's design was also based on Stephen Gammell's iconic illustrations from the original books; the very aspect of those collections that made them so memorably frightening.

Scary Stories to Tell in the Dark is meant to be a family horror film, but it's probably going to be the scariest family horror film ever made. The source material was truly terrifying, and if anything, the movie only looks like it's going to amplify what made the books so frightening. So sorry, kids of 2019, but you're about to become just as traumatized as your parents.