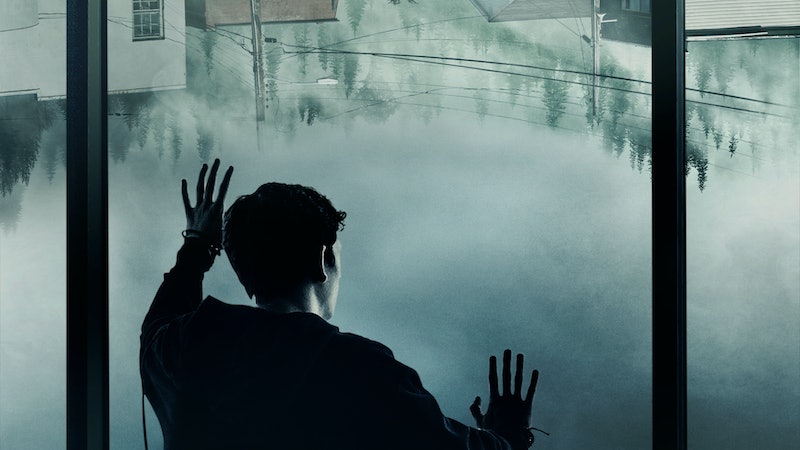 There's no wrong season to watch scary movies or TV shows, but the summer months always make me especially excited to watch anything that will give me chills. And, based on the synopsis and trailers for The Mist on Spike, this 10 episode series should definitely do the trick. Based on a creepy novella by Stephen King, the show has all the makings of what could be all horror fanatics' next obsession: crime in a small town, supernatural forces, and themes that mirror real life (yikes). But on a scale of one to "I'll have to sleep with my lights on for weeks," how scary is Spike's adaptation of The Mist?

Like the novella it's based on, The Mist combines realistic crime elements with supernatural ones. Here's the official synopsis:

Spike’s The Mist centers around a small town family that is torn apart by a brutal crime. As they deal with the fallout an eerie mist rolls in, suddenly cutting them off from the rest of the world, and in some cases, each other. Family, friends and adversaries become strange bedfellows, battling the mysterious mist and its threats, fighting to maintain morality and sanity as the rules of society break down.

Although the concept of the mist sounds more like a psychological scare tactic, be warned that the "brutal crime" isn't the only violence in the series. According to Collider.com, "graphic violence and fantastic effects work" occur when the mist arrives. So, if you're on the squeamish side, be prepared to cover your eyes a few times.

Multiple outlets have noted that The Mist is particularly terrifying in 2017 because it's has eerie parallels to our current social and political climate. According to the show's press notes, The Mist's theme is universal. Showrunner Christian Torpe said:

"King’s novella is about the connection between fear and religious fanaticism. In developing it for TV, my hope was to expand on the notion and develop a story not just about religious fanaticism, but about the radicalization that seems to be taking place on all fronts of political, religious and private life today – not just in the States, my native Denmark as well. Exploring this radicalization and the personal, political and religious fear that drives it is my intention with this series."

Topre adjusted and changed certain plot devices and characters when he adapted The Mist for TV. For example, a religious zealot named Mrs. Carmody played a key role in the novella's fear-mongering and she won't be in the show — but it will address the issues raised by her character. And, it's noteworthy that the issues of homophobia, racism, and patriarchy are raised before the mist comes to the town of Bridgeville. All these things could arguably be more frightening than the mist itself.

When he penned The Mist in 1980, King had no way of knowing that events like Brexit and Trump's election would coincide with a TV adaptation — but his points about fear being the most dangerous thing of all are something to keep top of mind while watching the TV series. In the end, the creepy mist may not be the most terrifying part of the show — and that prospect itself is pretty scary.