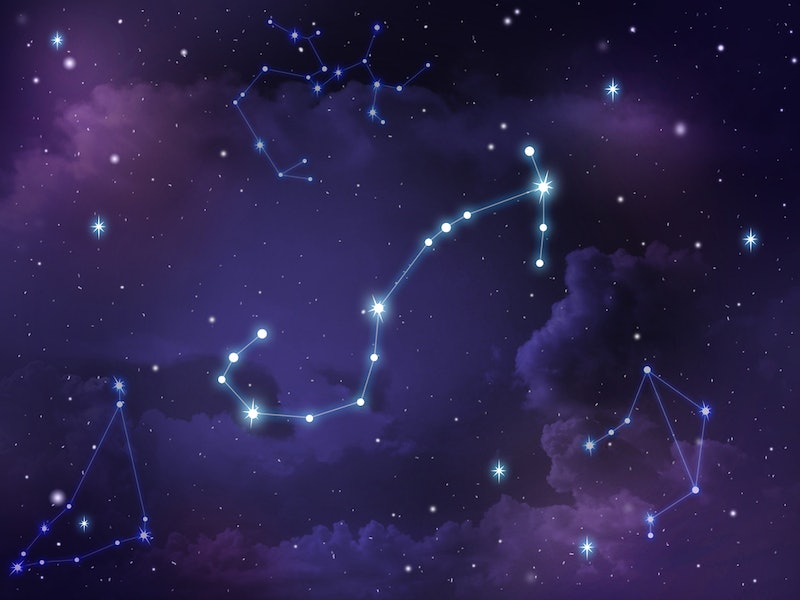 Scorpio season is upon us, and it's one astrological phenomenon you won't be able to ignore no matter how hard you try. Scorpio is known as one of the most intense and emotional zodiac signs out there, and when the sun moves into Scorpio on Tuesday, October 23, that energy becomes even stronger and more unavoidable. It will affect everyone in slightly different ways, and if you're interested to know how Scorpio season will affect you based on your zodiac sign, I've got answers.

Scorpio season is about deep emotions, and will cause you to look for the meaning in just about everything. Donna Page, a professional astrologer with a graduate degree in counseling psychology, told Women's Health, "It's intense. Scorpio is the sign that wants to know secrets." Because Scorpio is a water sign, you're going to feel more motivated by your emotions than ever before, and you might find any logic going out the window. You also might feel a bit more introverted than usual, both because you'll need time for yourself and because you are only craving meaningful connections you can't just get anywhere. Scorpio is also known as the most sexual sign, which means you're going to be looking for some passionate hook-ups and intimacy. Your emotions have taken over, though, so this isn't the time to try for anything casual.

It might sound overwhelming, but Scorpio season is necessary! Cosmopolitan says, "Think of Scorpio season as a time of regeneration where a part of you dissolves and is reborn, like a phoenix, forming a better version of yourself." This is when you'll really be figuring things out, making connections, and working through everything that has come to a head towards the end of the year. Just remember: Scorpios don't mess around. Here's how the season will affect you personally: