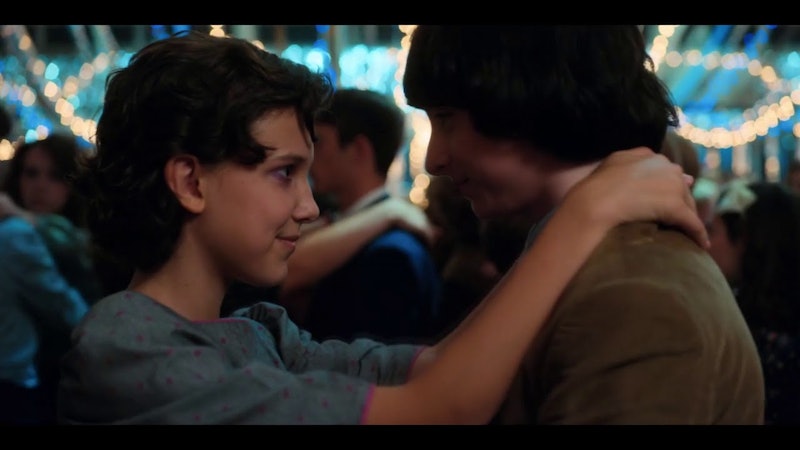 Considering that a typical episode of Netflix's Stranger Things features monsters, psychokinesis, and alternate dimensions, "realistic" probably isn't the first word you'd think of when describing it. Yet in the midst of all the sci-fi and fantasy, there's also a very real '80s vibe, with the show's setting influencing everything from its fashion to its pop culture references. And then, of course, there's the music. In key moments throughout the series, Stranger Things has featured some of the '80s' most iconic songs, from artists like Bon Jovi, Olivia Newton-John, the Clash, and many more. Speaking to Bustle, Stranger Things' music supervisor Nora Felder explains how she's used the decade's music over the last two seasons to make the show feel as real to its time period as possible.

Felder began her career as a music consultant with the 1997 cult classic Romy & Michele's High School Reunion. In the years since, she's taken on projects ranging from Netflix's The OA to Showtime's Californication. In 2017, she earned a Best Music Supervision Emmy for her work on Stranger Things, and garnered a second nod (as well as a Grammy nomination for the Season 2 soundtrack) a year later.

As Season 3 of Stranger Things approaches, Felder walked us through how five of the show's most memorably '80s music moments came to be.

Released in 1982 on the album Toto IV, "Africa" was a major hit for Toto, becoming the band's only Billboard number one single ever. Over the last few years, it's regained popularity, thanks to covers from bands like Weezer and celebs like Kristen Bell and Dax Shepard.

In this Season 1 Stranger Things scene soundtracked to "Africa," Nancy and Steve stop their study session to make out.

"Not unlike The Clash’s 'Should I Stay or Should I Go', this was also an early select and scripted song by The Duffer Brothers," reveals Felder, adding, "Since the airing of the show, the popularity of Stranger Things has proven to be hugely instrumental in catapulting the song’s rise back into the zeitgeist."

2. Mike And Eleven Dancing To "Every Breath You Take"

The 1983 Police song was a massive success, earning the band two Grammys and becoming the biggest hit of the year. It's widely considered to be one of the decade's best songs.

In this Stranger Things Season 2 scene, the gang attend their school's Snow Ball, where Mike and Eleven slow-dance to "Every Breath You Take."

“'Every Breath You Take' was one of three selected song options to have on hand on set for the characters to dance to," explains Felder. "When the footage came in with this song, it was clearly the best choice for Mike and Eleven’s romantic storyline and the scene."

And it also was an Easter Egg, if you looked closely.

"As many hardcore fans have noted, the lyric in the song, 'I’ll Be Watching You,' could be a reference tying in our Season 2 ending, in which the viewer becomes aware there is a monster, lurking in the shadows," says Felder.

3. Jonathan Playing "Should I Stay Or Should I Go" For Mike

This 1982 track from The Clash wasn't an immediate success, but a decade after its release, it rose to become the band's only ever number-one single.

When Will becomes possessed in Stranger Things' Season 2 and can't communicate with his family or friends, his brother Jonathan plays the song — one of their favorite songs — to wake him up.

"From the get go, 'Should I Stay Or Should I Go' was a scripted song that [Stranger Things co-creators] the Duffers had in mind as the perfect song to carry through the story and closely tie the Byers family together," says Felder. "As the story evolved with every added chapter written by The Duffers, the song’s use continued to grow with the story, which simultaneously required more clearances to be obtained."

"Consequently," she adds, "we had to carefully convince the Clash’s representatives that a first season show about monsters from an alternate world would result in a multi layered and impactful use for this song. Thankfully they believed us, and everyone worked out!"

4. Nancy And Steve Arguing To "Girls On Film"

Released in 1981, the Duran Duran classic gained popularity in America after MTV played it frequently a few years later to coincide with the re-release of the band's debut album Duran Duran.

In a Stranger Things Season 2 party scene, Nancy drunkenly reveals to her boyfriend Steve that she's not in love with him anymore, causing a fight between the two of them — all while "Girls on Film" plays in the background.

"Many times a song that is selected on set to playback for actors to dance to does not always end up being the final choice. Many decisions are made in the editing room after shooting is complete, when there’s more time to dig deeper for the perfect match. This was the case with Duran Duran’s iconic 'Girls on Film,'" explains Felder. "The song was ultimately selected because the lyrics seemingly amplify Nancy’s tumultuous psychological state, while feeling like she needs to be in the spotlight having a good old time at this party. Duran Duran’s depiction of 'Girls on Film' subtly conveys that when everything looks pretty on the outside, it can conceal a much darker internal reality, as was the case with Nancy."

Bon Jovi's debut single was originally released in 1983, gaining success that summer after the group won a radio contest for the best unsigned band. It later became the band's first U.S. Top 40 hit.

Stranger Things' Season 2 sees an upset, confused Eleven run away from home after finding her catatonic mother and struggling to understand her own powers. As she takes a bus to Chicago and spends the night walking the city's streets, "Runaway" fittingly plays in the background.

"This 1984 Top 40 song was selected to match the timeframe of the series," explains Felder. "Bon Jovi’s 'Runaway' was a song that Eleven might have heard and immediately identified with as she courageously breaks into the real world to find answers."

Stranger Things may be filled with supernatural elements, but the music chosen by Felder and her team help make the show feel true to its '80s origin, even during its most mind-blowing moments.

More like this
At 14, D'Arcy Carden Was Sneaking Out To Parties & Crying Over Kurt Cobain
By Ivana Rihter
Gabby & Rachel Reveal How That 'Bachelorette' Rose Ceremony Twist Happened
By Grace Wehniainen
In Rap Sh!t, Social Media Has Main Character Energy
By Aramide Tinubu
The Office Lego Set Includes All Your Favourite Dunder Mifflin Characters
By Sam Ramsden
Get Even More From Bustle — Sign Up For The Newsletter