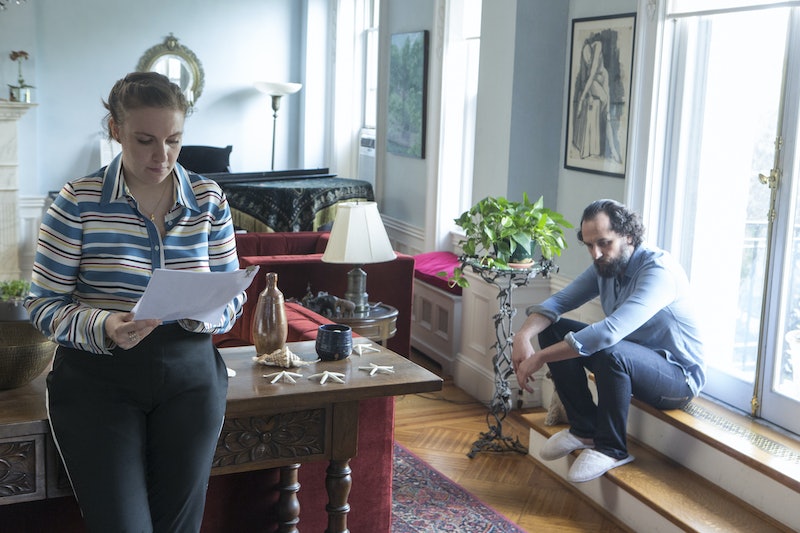 Spoilers for Sunday's Girls episode, which hit HBO Now & HBO Go early on Friday. Over the last few years, society has taken meaningful strides to deepen conversations about sexual assault and rape culture. Survivors have bravely shared their stories, campaigns have been launched, and documentaries crafted. But for all the progress we've made, there exists a lingering debate about what does and doesn't qualify as rape — one that often, if unintentionally, shuts out the voices of those whose experiences may not be so black and white. And that's why the portrayal of the non-consensual sexual encounter in the Girls episode "American Bitch" between Hannah and the fictional author Chuck Palmer is so important.

Across its 30-minute narrative, Hannah engages in a heated tête-à-tête with Chuck Palmer (Matthew Rhys), an acclaimed author whose work she'd long admired. She'd written an essay about the sexual assault allegations waged against him by a handful of young, female writers, and he'd invited her to his apartment to give her his side of the story. At first, he comes off charming, charismatic, concerned. He claims Hannah simply failed to do her due diligence with fact-checking, and that his exchanges with the women had been entirely consensual.

“I’m a grown man inviting a grown woman to my hotel room. Did I put a gun to her head? Did I offer her a job?" he says. "An invitation isn’t inherently wrong or dangerous.”

He makes a point of saying that the women weren't interested in getting to know him, and that all he's guilty of is "not pushing hard enough" to "get to the heart of [their stories]." He tells Hannah that's why he asked her to come over, to "fix it," to ask her where she's from and who she is, to show her she's more to him than "just a pretty face." What's most unnerving is that you begin to believe him, to almost empathize with him. And so does Hannah. “You thought you knew everything. But you didn’t," he tells her. She nods.

It isn't until later, after he's complimented her, made her comfortable, and sparked up a camaraderie, that Palmer asks her to lie next to him on the bed.

“Just a moment,” he pleads. “And I’d encourage you to keep your clothes on to delineate any boundaries that feel right to you.”

Hesitantly, Hannah does. And it's only then, after she's let her guard down, after she's apologized for writing something "without considering all the facts," that he turns around, unzips his pants, and places his penis — uninvited — on her leg. Hannah touches it briefly, almost instinctively, before jumping up and realizing what he's done.

It's a scenario that falls into that uncomfortable conversation about consent that people seem so hesitant to explore, at least on screen. Is Hannah a grown woman who is very capable of making her own decisions? Yes. Did she willfully put herself into the situation? Yes. But does that mean she's responsible for everything that happens because she consented to a portion of the interaction? Absolutely not.

This is a man who knows he's in a position of power and who knows what he means to Hannah, and he uses that influence to manipulate her just as he likely did the women before her. In so little as a gesture, he transforms a relatively innocent encounter into something immediately sexual, and, before Hannah even realizes what's happening, she feels compelled to comply. He may not have been violent or forceful or threatening, but that doesn’t make it consensual, and judging by the smirk on Palmer's face, he either doesn't realize how wrong it is or doesn't care.

Such exploitative behavior is too often brushed off as a "gray area" and explored little beyond that. But here, Girls takes a definitive stand. "American Bitch" is a nuanced portrayal of a subject that’s been too frequently sensationalized bluntly on television. It shows, quite boldly, that a non-consensual sexual encounter is not a singular experience — it's not always violent, it's often complicated, but at the end of the day a lack of consent is just that. This depiction of consent may not be what people have come to define as rape, but that's the point. Girls is exploring an area of assault that is frequently brushed under the rug by media and people alike because it can seem difficult to understand. But, in this quiet, nuanced episode, Girls makes the line between consent and the lack of it perfectly clear.

More like this
New ITV Drama Maternal Is Lifting The Lid On Life As A Woman In The NHS
By Catharina Cheung
An Ultimate Guide To The Music Of 'Rap Sh!t'
By Brad Witter
Everything To Know About 'Loot' Season 2
By Kadin Burnett
Does 'Locke & Key’s Ending Mean There Could Be A Season 4?
By Sophia Moore
Get Even More From Bustle — Sign Up For The Newsletter