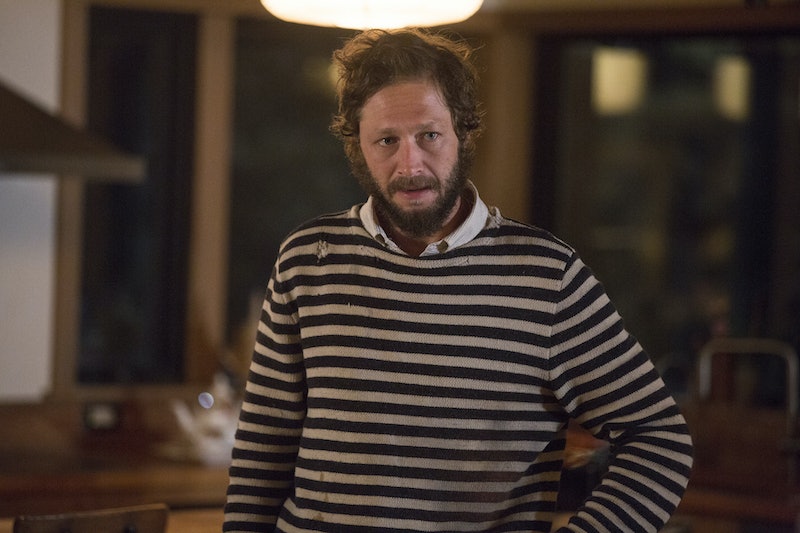 Girls may be on its final run, but it certainly isn't cutting back on any of the drama. Only two episodes into Season 6, it's already dropped a major reveal: Desi is addicted to Oxycontin. Star Ebon Moss-Bachrach tells Bustle that it wasn't a development he'd known about, but one that wasn't entirely surprising. In fact, he says it's not unlike Desi's toxic relationship with Marnie.

"Their relationship is kind of like an addiction too. There are highs and lows and a lot of physical need," he says. "I think as much as Desi hates the torture that Marnie puts him through, he really loves it in the way he can use all that for his art. They have this epic love affair and it’s being recorded in real time by the songs that they’re writing for each other and about each other, and it's this total hurricane of emotion and absurdity."

Still, Marnie discovering Desi's addiction was one of the most destructive moments in their ill-fated romance. In a scene that was simultaneously bizarre and terrifying, Marnie opened Desi's briefcase and uncovered a mason jar filled with small, white pills. She questioned him about it and he angrily confessed he'd been taking Oxy for a year, leading to an aggressive confrontation.

Eventually, Desi calmed down enough for Marnie and Hannah to put him in the car and drive home from the upstate cabin where they'd all been staying, but it's unclear how he and Marnie will face the issue moving forward. Their relationship has always been messy, and even more so now that Marnie is dating both Desi and Ray, but it's questionable whether either of them are capable of sorting through their problems while Desi confronts something as serious as addiction. Still, Moss-Bachrach insists that beneath all of that turmoil, there's something real.

"[Desi] 100 percent has a genuine love for Marnie. A completely special love," he says. "I think he’s a lot of special loves in his history, but this one is the most special to him ... He really, really cares for her and wants to be with her."

But it's hard to find a bright spot in Desi and Marnie's ever-dysfunctional romance. As much as they love each other, they may be better off apart, and it sounds like this might be the season they're finally be able to realize that. "[Desi] sort of randomly meets everyone in the beginning and has this impromptu visit," Moss-Bachrach says of Desi's Season 3 arrival. "And then the way he is at the end of the show seems like he’s just maybe sort of randomly going away, maybe."

And while Desi is leaving behind someone as special as Marnie, so is Moss-Bachrach as he and the cast close the door on Girls. "I definitely knew that this was a different kind of set and a different kind of work experience and one that was special and one that I wasn’t going to take for granted because it felt very collaborative and warm," he says of his time on the show. "I know people say like a family, but Jenni [Konner] and Lena [Dunham] … it felt very much like that ... I have two daughters and my house is filled with girls all the time. I prefer it. I’d rather be around amazing women all day."

Wouldn't we all, Ebon?