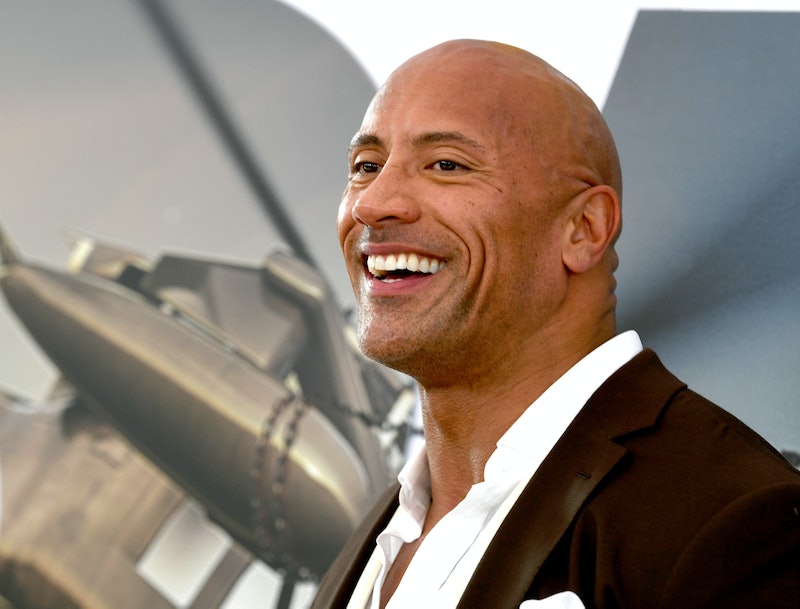 Let this sink in: If the memes are correct, Peppa Pig currently stands taller than The Rock. The animated British pig is apparently 7 feet tall, which makes Peppa taller than the former wrestler and Fast & the Furious star. So, how tall is Dwayne Johnson? The Rock’s height is still Big Peppa Pig Energy. Johnson is listed as 6 feet, 5 inches tall by Google. This puts the former professional wrestler turned film star a whopping 5 inches under Peppa Pig. Johnson's 6'5" stature currently stars in Fast & Furious Presents: Hobbs & Shaw, in theaters August 2.

The film serves as a Fast & The Furious spin-off from the action franchise, in which Johnson and Jason Statham (who stands at 5'10" according to Google) reprise their roles as Luke Hobbs and Deckard Shaw, respectively. The film follows Hobbs and Shaw as they form an alliance to combat a “cyber-genetically enhanced villain," as per the film’s synopsis.

While the actor is billed as 6 feet, 5 inches on Google, his Pro Wrestling profile actually lists him as 6 feet, 4 inches. This could be an oversight, of course — or, perhaps it could be a margin of error. Since his departure from the wrestling ring, Johnson has starred in a series of popular films, such as — along with the Fast & Furious franchise — The Game Plan, Moana, Race to Witch Mountain, Baywatch, and Jumanji: Welcome to the Jungle. He’ll next star in Jumanji: The Next Level, a follow up to 2017’s Welcome to the Jungle.

And now, for purposes of scale, here are a few pictures of Johnson next to fellow actor colleagues to examine his 6'5" stature.

Johnson currently stars opposite Elba in the Fast & Furious spin-off Fast & Furious Presents: Hobbs & Shaw. According to Google, Elba stands at 6'2". Here, the two attend the premiere of the film, and the 3 inch discrepancy appears to be accurate.

Johnson starred opposite Zac Efron in the 2017 Baywatch remake. Here, Johnson stands by Efron, billed as 5'8" on Google, and Baywatch alum David Hasselhoff, billed as 6'4" on Google. Oddly enough, Hasselhoff looks a tad bit taller in this particular photo. Are his shoes perhaps elevated? While Google has billed him as technically shorter, he did have the honor of transporting SpongeBob on his pecks in The SpongeBob SquarePants Movie, so.

Johnson starred opposite Nick Jonas, Karen Gillan, and Kevin Hart in 2017's Jumanji: Welcome to the Jungle. At the premiere, he's perceptibly taller than Jonas, billed at 5'6" and Hart, billed at 5'4". Gillan, on the other hand, stands at 5'11". The two are nearly the same height, but perhaps Gillan is wearing heels to make the difference less perceptible.

While Johnson and Jacob Tremblay may have not starred in a film together (yet?), the two met back in April in Las Vegas. On social media, the smol Tremblay, billed as 4'7", captioned a picture of the two, "Humans in photo are LARGER than they appear! Thank you Mr. Rock for being so kind & taking the time to chat."

Catch all 6'5" of Johnson in Fast & Furious Presents: Hobbs & Shaw, in theaters now. Peppa Pig is no match for the fictional world of illegal street racing, but Dwayne "the Rock" Johnson certainly is.