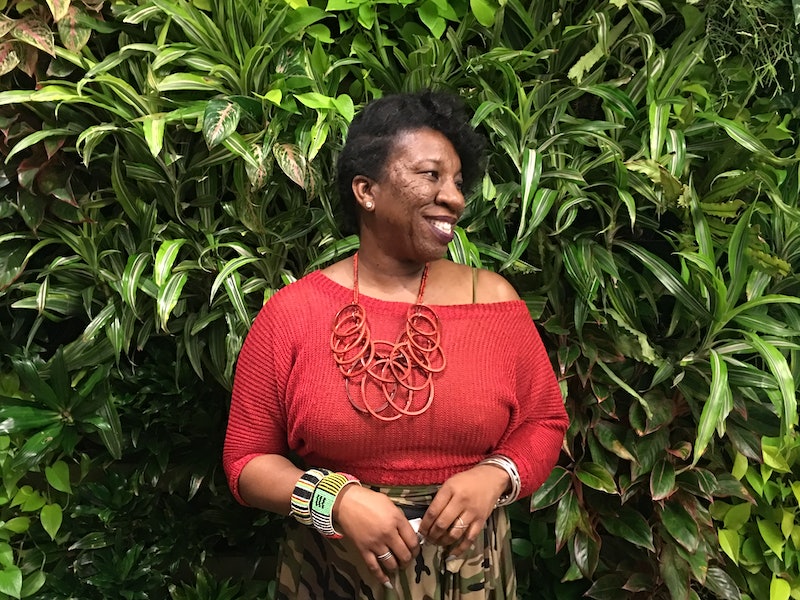 As more than four dozen women came forward to accuse movie mogul Harvey Weinstein of serial sexual assault, women outside Hollywood raised their voices to show how often they encounter harassment and abuse by posting comments on social media with the hashtag #MeToo. While the spontaneous movement took flight thanks to the many women who began posting their stories on social media, the language was strikingly similar to that used by activist Tarana Burke.

Burke didn't start the viral hashtag herself, but it perfectly mimics the work she's been doing for the last ten years as part of her "Me Too Movement": Teaching young people to recognize assault, urging survivors to speak out, and using that power to dispel the shame and secrecy that surrounds sexual violence. And today, Bustle has learned, Burke's Me Too Movement has a new digital home: metoo.support. A re-vamped website launched Thursday afternoon.

The "Me Too Movement" & #MeToo

"I was at home and ... my phone started going off, people started tagging me, email, sending me DM's [saying] 'I keep seeing 'me too,' but I don’t see your name anywhere. What’s happening?,'" activist Tarana Burke says about the moment she learned of the social media campaign. Celebrities like Alyssa Milano were given "credit," but Amy Siskend, president of the women's advocacy nonprofit The New Agenda, told Bustle in an interview that it happened naturally, without a clear origin. The hashtag took Burke completely by surprise, because it formed in "a different cloud on Twitter than I’m in."

When Milano got word of Burke's work and the "Me Too Movement," she called the story "equal parts heartbreaking and inspiring," and tweeted out a link Monday evening to a web page associated with Burke, justbeinc.wixsite.com. But Milano tweeted a link to a decade-old page that Burke barely frequents and doesn't direct supporters to, leading to confusion over the #MeToo origin story. Just Be Inc. is a nonprofit organization created by Burke years ago; the site's homepage currently has a call-out for donations, t-shirt sales, and student testimonials. Burke tells Bustle she isn't actively soliciting new donations and can't remember receiving any donations through that page in recent years. She says less than $100 has trickled in in small sums since Sunday.

The current online home for Burke's work is metoo.support, a new, sleek black and fuchsia home page with the words "Because you are not alone" splayed across the top, which launched Thursday.

The activist has gone through an iteration of names and sites for her work, including mtm.org, which she says she picked up to abbreviate the "Me Too Movement," since "Me Too" wasn't available. (She remembers encountering a shoe site called metoo.com, while metoo.org went to a healing space for people with deceased family members.) She says she never made an effort to trademark the phrase, and when an acquaintance told her it wasn't possible, she didn't push it "because I didn't imagine that something like this could happen."

"It wasn't started to be proprietary," Burke says. Now, millions of women are making that phrase their own.

The History of Tarana Burke's "Me Too Movement"

Burke says she started thinking about the phrase "Me Too" in 1996, when she was working at a summer camp. One day, a young camper confided in Burke, revealing that she had been assaulted by her mother's boyfriend. Having herself endured repeated sexual assaults a decade prior, Burke says the girls' story was "too painful" to hear. "I was just kicking myself. Why would you let this child, who you adore, walk away with nothing? Like, empty handed. I remember thinking, at the very least, 'You could have said "me too."'"

In 2007, Burke says she used the name "Me Too" on a grant application to build up a nonprofit that would connect generations of sexual assault survivors. The Third Wave Foundation awarded her a couple thousand dollars to convene organizers from around the country, and together, they created a training curriculum for "survivor leadership circles" — safe spaces for younger survivors to talk about their experiences with older survivors in the community.

With a partner, Burke traveled around the country from Philly, to Atlanta, to Tuskegee University and Alabama State presenting two-hour long workshops to seventh and eighth grade students. At the program's height around 2007, she says they conducted some 15 workshops a year. There, the twenty-five or so kids in the room would have a conversation about consent and relationships and specifically about the kinds of relationships they were currently in. After a survey at the beginning of a workshop, Burke and her co-presenter would show the students a PowerPoint with words and definitions related to sexual assault. Burke found that often, the students weren't equipped with the language to talk about what they were experiencing.

"Some people say, 'You know how guys are, they just push you,' but what we're really talking about is date rape," Burke remembers telling the students. She would be candid with them about her own experiences with sexual assault, and a co-presenter would talk about her experience in an exploitive relationship. Later in the session, they'd show the students pictures of celebrities — Mary J. Blige, Missy Elliott, Queen Latifah, Gabrielle Union, Fantasia, and Oprah — who had survived sexual violence. On the backs of the photos was a description of the assault that person had endured. "We [would] talk about their stories and talk about, like, what do we think their trajectory to healing was," Burke says.

At the end of each session, the students would each get a small, square piece of paper, and were asked to write one thing they would take away from the workshop.

"And then we [would] say, if you are so inclined, if you want us to follow up with you, just write your phone number and your address and write 'me too' on the paper. And we did that so that we could collect papers from everybody so that no one was singled out," Burke says. She called this education series "The Me Too Movement."

What's the Future of the "Me Too Movement"?

Burke tells Bustle that the spotlight has brought attention to her work helping sexual assault survivors and revealed how she plans on pushing "Me Too" forward. To her, the phrase "me too" is an "entry point" to healing and works to dispel the shame that many sexual assault survivors feel. She is using her platform as the Senior Director of Programs at Girls for Gender Equity, a Brooklyn-based non-profit, to encourage leadership development, especially among young people of color. Now, she engages in workshops, trainings, and speaking engagements to highlight her cause, especially in communities that lack resources for sexual assault survivors.

In the coming months, Burke plans on doing a series of webinars on overcoming sexual assault, and advancing a curriculum on survivor education. She tells Bustle she's also planning on rebuilding the Girls for Gender Equity website and finishing her documentary — all in the name of "Me Too."

"It’s about building community among survivors," Burke says. "I felt like an anomaly. Who gets sexually assaulted three times? … I internalized that as something being wrong with me, not something happened to me.”

Between Sunday and Tuesday afternoon, #MeToo garnered more than 12 million posts, comments and reactions on Facebook and was used 825,000 times on Twitter. Nearly half of Americans are friends with someone who posted with the words "me too," CNN reported.

"The Twitter hashtag is a moment in time," Burke tells Bustle, reflecting on decades spent supporting young sexual assault survivors. "I would describe the hashtag campaign as a big win for the movement, and not just the Me Too Movement, but the movement against sexual violence."