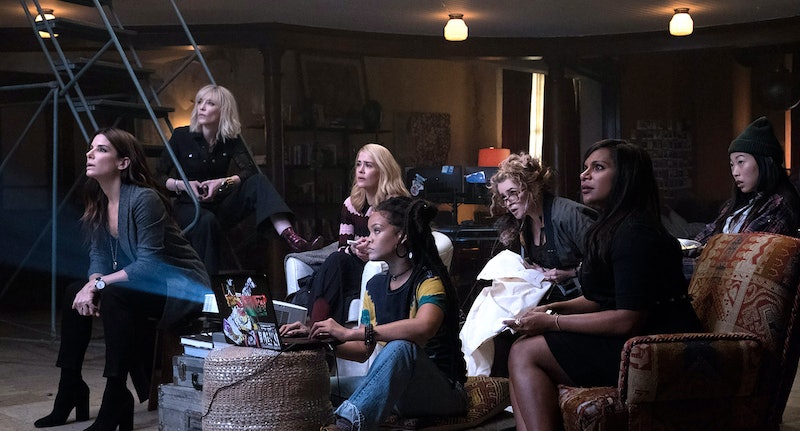 "Why are there no men in on the heist in Ocean's 8?" ask dissatisfied men on the Internet. Well, in Ocean's 8, Debbie Ocean, as played by Sandra Bullock, has a very specific reason for not including any men in her crew: she doesn't want the group to be spotted. "A Him gets noticed, a Her gets ignored. And for once, we'd like to be ignored," Debbie tells Lou (Cate Blanchett) while assembling the heist team. Not only is the quote a clear nod to the backlash to all-female movies, but it illuminates a specific, painfully real facet of living life as a woman.

As Ocean's 8 co-writer and producer Olivia Milch explains, Debbie's line is indicative of what it is to be a woman looking to accomplish her goals in a man's world. "It was this idea we had talked a lot about, which is what does it feel like to be a woman who wants to get something done?" Milch says over the phone in late May. "That's sort of a roundabout way of saying that women in these stories are often, you know, 'unnoticed.'"

Milch adds that it was co-writer and director Gary Ross who actually wrote the line, noting that the two often discussed how they wanted the role of women in Ocean's 8 to be different than how women usually portrayed in more traditional (read: male-driven) heist films; in other words, the ladies of Ocean's 8 are driven by ambition and very self-aware.

"We really wanted to tell a story about a group of women who want to accomplish something for the sake of accomplishing it. That they are driven because they have agency and desire to get it done," Milch explains. In this specific case, that means having the characters recognize that they could use the fact that women are easily ignored in big crowds, like one gathered at the annual Met Gala, for example. "They’re gonna take advantage of who they are in this world," says Milch. "And that is to say that sometimes it is kind of beneficial to be able to get under the radar, and the ways in which they use their skills and their roles and their positions as women to accomplish this."

Milch adds that the Debbie line is meant to have a bit of a tongue and cheek element to it. After all, the idea of Bullock, Blanchett, Rihanna, Mindy Kaling, Anne Hathaway, Helena Bonham Carter, Sarah Paulson, and Awkwafina going unnoticed anywhere is laughable. "There is sort of a beautiful contradiction within this film, in that these are some of the most glamorous, and stunning, and known women, and yet they're pulling something off — something massive off — under the noses of everybody in the world. And I think that's one of the great delights and joys of the movie," says Milch.

As is the fact that the line would never be found in Ocean's Eleven. All-male movies rarely, if ever, give a specific reasoning as to why no women are on the team. "To us, it's so normal to have a lack of women who are active participants in a plan in a film. So, they would never even think to address that," Milch notes. "But it is so rare and so special to see a team exclusively of women get something done because we're so used to expecting that there would be men."

As the writer notes, women are used to seeing themselves on the fringes of the action, both in film and in everyday life. In Ocean's 8, that level of invisibility is finally being used to further female characters in reaching their goal. Why aren't men part of the Ocean's 8 team, you ask? Because, for once, a movie is embracing the fact that men aren't always necessary. As Milch says, this "is a team of women making sh*t happen." No men required.

More like this
Twitter Is Identifying With Sally Field & Jane Fonda’s Friendship In New Viral Video
By Jake Viswanath
Keke Palmer Shares The Sex Of Her & Darius Jackson's Baby
By Jake Viswanath
Austin Butler Confirms Vanessa Hudgens Pushed Him To Do 'Elvis'
By Alyssa Lapid
At 28, Rosie Perez Risked Her Career To Stop Playing Stereotypes
By Gabrielle Bondi
Get Even More From Bustle — Sign Up For The Newsletter
From hair trends to relationship advice, our daily newsletter has everything you need to sound like a person who’s on TikTok, even if you aren’t.