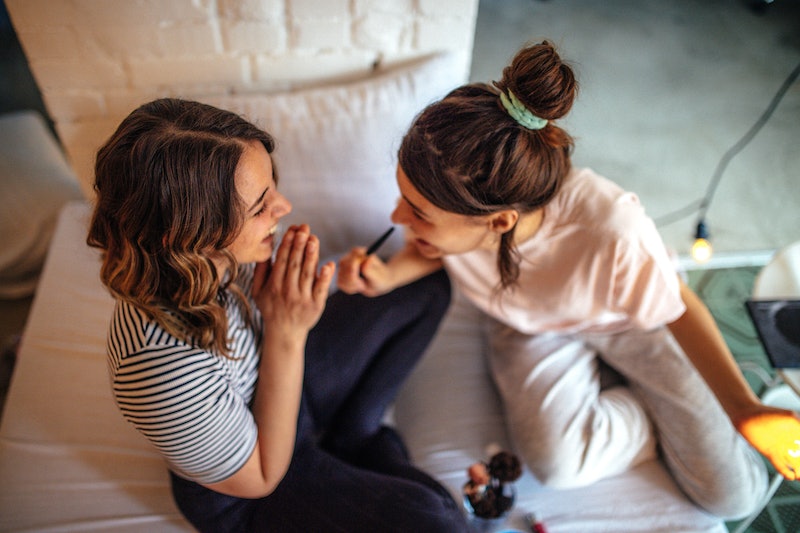 Any look back at the previous decade will inevitably be colored by what happened in the more recent half. Think: the 2016 election. Burnout. #TheStew. They may seem different on the outset — one, a viral chickpea-and-coconut milk recipe; another, a response to working conditions that somehow keep getting worse; the last, a challenge to democracy that the country was unprepared to meet. But each of these follows one common thread; that they encouraged people at large to stay in.

“I grew up going out to nightclubs in New York; I'm seeing less and less of that happening with people in their early 20s,” Cyndi Ramirez-Fulton, founder and CEO of Chillhouse, a New York-based spa, tells Bustle. “Staying in is the new going out.”

You may not have noticed its slow creep, but since the beginning of the decade, more young people have unconsciously eschewed going out in favor of practicing self-care, watching the “golden age” of TV, or handling all the to-dos that get lost during the week. Perhaps this is simply a result of millennials, born between 1981 and 1996, getting older; even though I’m only in my mid-20s, I’ve certainly noticed my desire to go out dwindle. Now, as Alisha Ramos, founder of Girls’ Night In, an online newsletter and community about self-care, tells Bustle: why go out when you could just Seamless and Netflix and facemask and chill?

Krystal D’Costa, a cultural anthropologist who studies digital media, tells Bustle it’s impossible to overlook how “our social media habits have encouraged this trend.” With the rise of social media, particularly Instagram (launched in 2010), staying in became shareable. Technology, too, has also enabled us to stay in, thanks to the convenience economy: Postmates was founded in 2011, Grubhub merged with Seamless in 2013. In a 2019 survey of nearly 3,000 consumers, 41% had used a food delivery service once in the last 90 days.

If this decade is defined by anything, it may be by the phenomenon of staying in. By staying in, we honed the practice of self-care; we also got lonelier, by a lot. But what gave us permission to stay in in the first place?

Even as the economy recovered through President Obama’s first term, these cost-saving habits stuck. Data from Google Trends shows that searches for “meal prep,” for example, began to climb around 2013, with peaks around each subsequent January, when people recommit to both healthy eating and cost-saving.

Ramirez-Fulton cut her entrepreneurial teeth in the nightlife scene, opening three bars with her husband, Adam Fulton, through the early 2010s before founding Chillhouse in 2017. “It kind of smacked me in the face a little bit” when their first bar opened in 2014, she says, that people were more drawn to a casual bar environment than a nightclub, and that people were “going home earlier than they used to.”

The Rise Of Social Media

Though people headed home earlier than perhaps they used to, that didn’t mean their socializing had to stop. Technological advances in the beginning of the decade created an entirely new way to stay in touch.

“In the 2010s, Instagram became the world’s filter,” reads a New York Magazine interview with Kevin Systrom, the co-founder of Instagram. “I had this moment where I really felt clarity, that the fact that phones now had cameras meant there was going to be this massive shift in how people shared their lives,” Systrom said.

Through Instagram, we were able to curate personal brands, as opposed to indiscriminately sharing snippets of daily life as one might on Facebook. But with people still reeling from the aftereffects of the recession, it was seen as declassé to show off that you still had money.

“There are always going to be people who have the means to be able to do more than others,” says D’Costa. “But there was also a lot of stigma around showing what you had post-recession.” People began to move away from posting a “night out at the club, or a big fancy meal you’re eating,” and toward posting a “wonderful home-cooked meal.” (Look only to the proliferation of stories about Alison Roman’s viral #TheCookies recipe, from her 2017 cookbook Dining In, for proof.)

Still today, that change has cemented. “It's almost unappealing to show that [party] side of you at this point — it's like, no one needs to see that,” Ramirez-Fulton says.

A Change In Celebrity Culture

Mixed up with this change in how we documented our nights out is celebrity culture. Celebs all got Instagram around the same time we did — when it was weird to post evidence that you were unaffected by the recession.

D’Costa explains this had two major impacts. One was that Instagram allowed celebrities to take control of their narratives, rather than those narratives being engineered by a PR machine. (Or, OK, to a lesser extent.) Going out to the club, as a celebrity or not, used to be “the thing to do,” Ramirez-Fulton says — you could “see and be seen only in nightlife.”

“Prior to the 2010s, you really relied on tabloids and paparazzi photos for candid, ‘What are celebs like in real life’-type snapshots,” says Ramos. Now, celebs can use Instagram to show their fans directly what they sing to wake up their children.

This shift is measurable not just in tabloids, which, duh, you can still buy in the supermarket checkout line, but in the traditional celebrity profile, too. Today’s top celebs “share extensively on social media on their own terms, moving quickly and decisively (and messily) with no need for the patience and pushback they might encounter in an interview setting,” wrote Jon Caramanica, the New York Times’ pop music critic, in a 2018 article entitled “R.I.P. The Celebrity Profile.” Celebs like Chrissy Teigen can build their brands by tweeting from home. They don’t need to party at 1 Oak or sit for a Vogue cover in order to give their fans access to their lives.

D’Costa says that the other effect of social media was that just as it was tacky for those spared by the recession to flaunt what they (still) had, celebrities took their cues from the people they were following — and who they hoped would follow them.

“As much as we feed on celebrity behavior online, and we try to emulate it in our own photos and in our lives, [celebrities] are also responding to where their viewers are,” says D’Costa. “Their product is only as consumable as it is relatable.”

Social Media And The Election

The 2016 presidential election was the turning point of the decade. A majority of the country saw their candidate lose the presidency, despite the ostensive meaning of the word “majority,” and the general mood was at a nadir. (Crisis Text Line, a hotline that provides suicide and other mental health crisis intervention services, reported receiving double the volume of typical outreach around the election night.)

In the same way that, post-recession, it became undesirable to display wealth or status on social media, post-election, documenting one’s staying in became a way to perform solidarity. “What’s the point of going out,” we asked, “if not to protest?” (The gross privilege of claiming that protests are “the new brunch” would be revealed in time.)

D’Costa says that the feedback loop of social media led us to believe “that our experiences are so personalized that the election will turn out the way we want it to.” That that didn’t happen “was a significant enough blow to cause a withdrawal.” She adds that “people needed time to recuperate, [and] reverted back to some of those behaviors” — staying in — that we saw after the recession.

Ramos says the mood after the election was a “key factor” in launching Girls’ Night In. “People were looking for a happy escape,” she says. “Taking care of yourself, taking things a little bit more slowly,” provided that release.

It was after the election that “self-care” became a widespread practice. Data from Google Trends shows that search volume for “self care [sic]” held steady until 2016, then began climbing until hitting a marked peak in September 2018. Ramirez-Fulton says, “We [became] more used to the idea of taking care of ourselves, mentally and physically.”

Self-care culture on social media — the sheet masks, the bathstagrams, the gym selfies — helped promote an aspirational lifestyle. But for many people, self-care meant avoiding social media altogether, precisely because of the ways people performed happiness, sadness, or self-care.

“We've built this entire empire of living our lives online and ... sharing every little bit of our lives online,” says D’Costa. “We've reached a point with the saturation of social media where people are more critical of what they’re seeing. When you post things that are clearly staged, or ... promoting that you’re living a certain lifestyle, and people know that you’re not, it’s harder for them to accept you in their offline circles.”

But because Instagram has expanded our social networks so much — how many people do you follow who you don’t know IRL? — it’s easier to take at face value that a staged or curated photo does represent the poster’s real life, that they are being authentic. If you’re seeing other people doing “all these fun, exciting things, and you’re at home scrolling through your Instagram feed, that distorts your view of reality,” says Ramos. “It can make you feel like, maybe I should be outside right now, [or] at this person’s party.”

That compare and despair effect is often cited when talking about increased rates of loneliness among millennials. A 2019 survey by YouGov found that 22% of millennials reported have no close friends — at all. Has staying in culture made us more lonely?

“If you define staying in as being alone in your house, then yes,” Ramos says. “Solitude and loneliness are different things, but if you’re someone who doesn’t have a lot of close ties, and staying in has become easier, then I think that can become a dangerous situation.”

Staying In To Go Out

Staying in is here to, well, stay. But that doesn’t necessarily mean we can’t learn to do it better.

“Although a lot of times we think about the act of staying in as a solo thing,” says Ramos, people have an “innate desire and need for community.” That’s why, she says, Girls’ Night In is Girls, plural, with an emphasis on group activities. “Staying in is great if you use it as a way to recharge. ... But it’s a balancing act — you have to build your community around you.”

“Offline networks are as important as online ones,” says D’Costa. She suggests that finding “authenticity” online is one solution to feeling more secure, and finding more community, in online relationships.

Ramos says she wants to see more people use staying in as a way to recharge — so they can go back out. “I'm looking forward to seeing less of an emphasis on staying in, and more viewing ... self-care as a way to recharge in order to do something for the community around you,” she says, pointing to the upcoming 2020 presidential election. “I hope that staying in doesn’t mean we’re in a bubble, but that we’re recharging so we can help burst some bubbles."