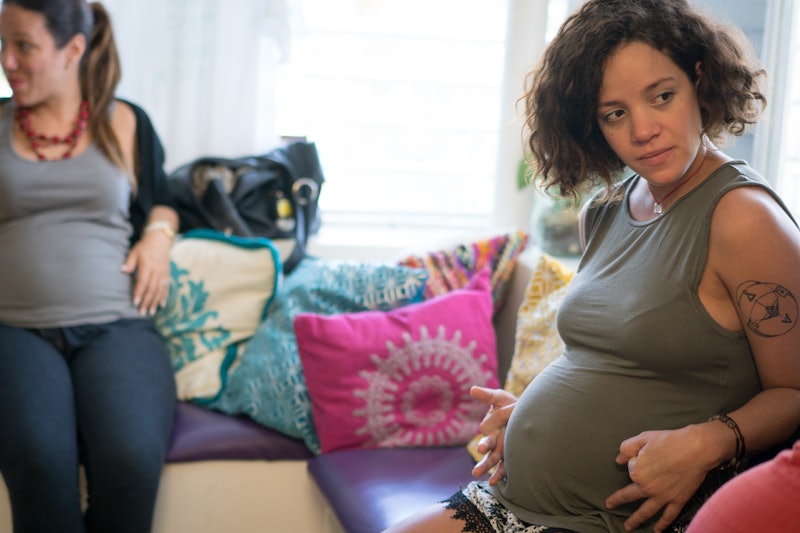 Last week, when Republicans in the House of Representatives passed the American Health Care Act (AHCA), it left Americans who purchase their health insurance through individual marketplaces wondering what their medical future holds. With the potential repeal of the Affordable Care Act (ACA), these Americans aren't sure what to expect. One of the most vulnerable groups that stand to be greatly affected by this bill is women who are pregnant or plan to become pregnant.

Under the ACA, maternity coverage was considered an "essential benefit," meaning insurance providers were required to cover it in their health plans. This made quality prenatal care in the individual health care market (relatively) easily accessible. According to a statement shared with Bustle from the American Congress of Obstetricians and Gynecologists, prior to the ACA, "only five states required maternity coverage, only 12 percent of individual market plans offered this coverage, and maternity care riders offered little real financial protection."

Getting maternity and newborn care covered as an essential benefit in the ACA was a huge achievement, March of Dimes Senior Vice President of Public Policy & Government Affairs Cynthia Pellegrini tells Bustle. "When we worked on ACA, the top priority was expanding coverage," Pellegrini says.

That progress for maternal care could be lost under the AHCA, says Brigette Courtot senior research associate at the Urban Institute's Health Policy Center. "If [a pregnant person's] state isn't covering it, and there are no other state laws that require it, it's very possible that a women in the individual marketplace would not have an option of a plan that covers maternity care," Courtot tells Bustle.

In areas where a full plan that includes maternity care is not available, a maternity rider might be, which is supplemental insurance that one would have to purchase in addition to their normal health insurance. But these plans can be very expensive, Courtot says, potentially reaching up to $1,000 a month, and the costs could potentially outweigh the benefits received.

Women whose incomes are too high to qualify for Medicaid, but who could not afford the expensive premiums of a plan or rider would be left to pay for their pregnancy out-of-pocket. This is a scary prospect, not only because of the extreme costs of medical care in this country, but because of the unpredictable nature of a pregnancy.

Looking at figures published by the March of Dimes in 2013 detailing what employers paid in pregnancy health care costs, Pelligrini estimates that the cost of pregnancy ranges from $4,300 for an uncomplicated birth to $54,000 for premature babies. "It varies wildly based on geography," Pellegrini adds. "It's a very wide range... There are million-dollar babies out there."

It's clear from the way that Republican lawmakers are trying to sell the AHCA that saving money is part of the appeal. Conservative health care expert Avik Roy, who overall had criticisms of the legislation, said positively of the AHCA in an interview with Vox, "if you’re able to attract more younger and healthier people into the insurance pool in the individual market, you should bring premiums down for everybody and you should actually be able to cover more people. That part of the bill is pretty good. It repeals and reforms the right regulations in order to ensure younger and healthier people aren’t priced out of the market."

However, the problem is that these benefits for younger and healthier people come at the expense of the coverage for vulnerable groups, like pregnant women, according to critics. And the thing is, the coverage concerns will reverberate beyond these women, points out Dr. Paul B. Ginsburg, the director for the Center of Health and Policy at the Brookings Institution.

"Some people see it as a gendered issue, but it doesn't strike me that that's the way to think about it," Ginsburg tells Bustle. "Most pregnancies have fathers associated with them. They're going to be impacted in the same way as their wive or partner. It's really just a matter of this notion of 'Are we a community, or is it everyone for themselves?'"

While the AHCA has passed the House, it now has to go to the Senate for approval, where it already looks like it may face an uphill battle.

And advocates aren't going to make that fight any easier.

"We want to make sure lawmakers understand that making maternity coverage optional would be penny-wise and pound foolish," Pellegrini says.