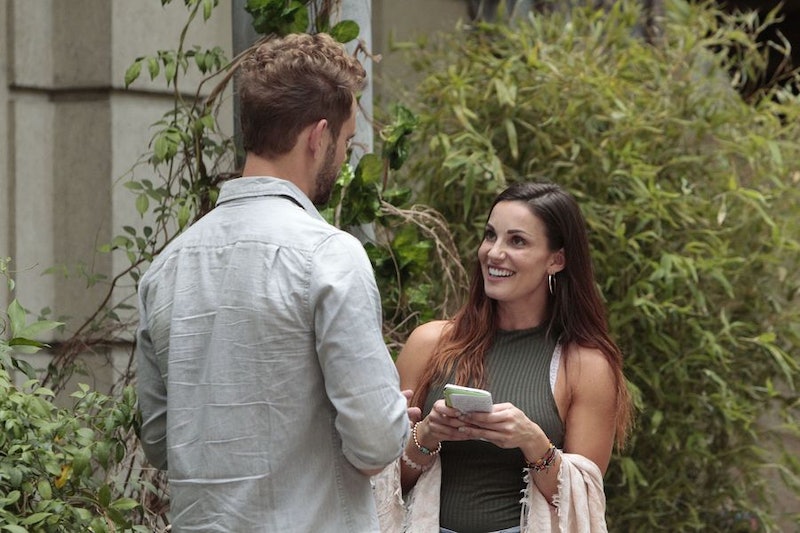 It's not often that The Bachelor ends in a cliffhanger, but last week's episode was a doozy. After deciding to send Liz home, Nick told the remaining women on their group date that not only had he and Liz met before at Jade and Tanner's wedding, but also that they'd slept together. And, then, when it came time for the cocktail party, he had to do it all over again and tell the other women in the house. So how did the rest of The Bachelor stars react to Nick's history with Liz? It could have been a lot worse, and after what they witnessed with Corinne, it became old news real quick.

When Nick got back to the Bach mansion, he explained the whole story to the rest of the women who weren't on the date, and he left no detail out. He filled them in on everything, from how he and Liz met to what went down that night. Watching their faces while Nick was making his pre-rose ceremony speech? Let's just say it was a good thing he told them to sit down and get comfortable before he started talking.

But as bummed out as they were that he'd kept them in the dark about his prior relationship (ish) with Liz, it didn't really compare with how they felt when Corinne kicked off her master plan to score Nick's undivided attention at the same time.

Basically, Corinne donned a trench coat and fed Nick some whipped cream from her boobs while the cocktail party was going on. She would have taken up even more of his limited time at the party if he would have obliged her, but in the end he didn't. She was clearly very disappointed... and the other women were genuinely annoyed that she was once again monopolizing his time the way she has been since night one. It was like the Liz thing never even happened.

It's hard to blame them for being upset, because Corinne has been interrupting their one-on-one time with Nick every chance she gets. But fortunately for them, Nick did end up avoiding temptation and left his conversation with Corinne before things progressed much further. But, at the end of the day, the name on every one's lips wasn't Liz's so it seems her past with Nick is just that — in the past.