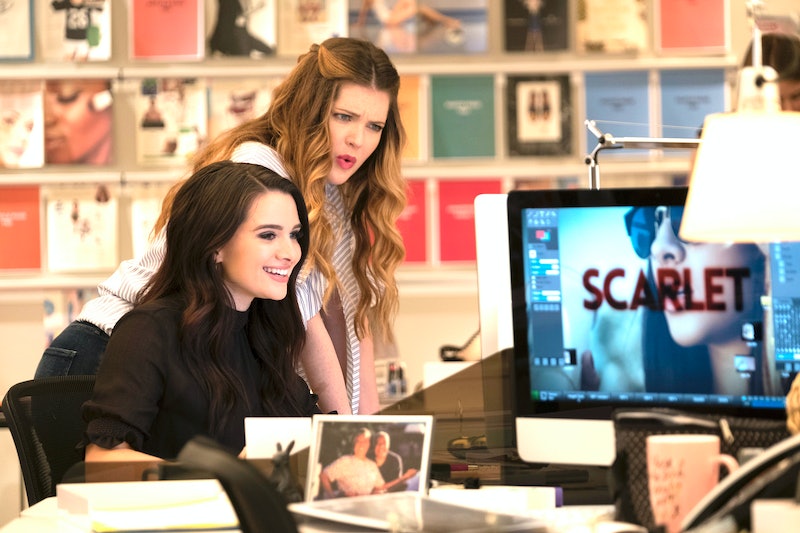 The Bold Type is glossy magazine fever dream: It exists in a world that's familiar with the dire state of the industry and is desperate to engage with it, yet still manages to depict it as infinitely more glamorous onscreen. Yes, most writers aren’t borrowing gowns from the fashion closet and showing up at their editor-in-chief’s house to chat, but the show is still deeply indebted to its real-world inspirations, even if they're a little idealized for TV.

Bustle spoke to The Bold Type executive producer Wendy Straker Hauser, who worked in magazines and newspapers early in her career, about how the changing digital media landscape inspired some of the show's most memorable plot lines.

In an effort to set herself apart and get a promotion, Sutton takes to Instagram to become a fashion influencer.

As full-time staff jobs in media become scarcer, the siren song of gaining Instagram followers to maintain clout in the industry grows louder. From curated outfits to unboxing videos to posts about body positivity, demonstrating personality on social media has become a major selling point for many employers and publishers.

“We wanted to get into the question of how you make yourself more valuable," Straker Hauser says. "How do you prove yourself? What does being an influencer entail? From how many likes you have and how much traction you are getting, the question we wanted to ask is: Is [your social media] authentic to who you are as a person?”

2. The Pivot to Digital

The Season 4 premiere opens on a new age for Scarlet: it's pivoting to digital-only, changing the course of the legendary magazine forever.

From Glamour to Teen Vogue to Redbook and beyond, countless major magazines have made the decision to cut costs and move from print to digital-only. “We were able to make the decision to go digital because it is happening left and right,” says Straker Hauser. “We used it as an opportunity to explore the world of podcasts and TV channels and show the extra added advertising aspects of going digital.”

This episode captures the uncertainty that comes along with a major shift. The beloved Jacqueline Carlyle (Melora Hardin) has been fired, and everyone is concerned for Scarlet's future. Jane, who has been fighting the digital side of the publication since day one, must now come to terms with a totally new pace of work and try to get her mentor back. One of the key pieces in bringing Carlyle to life is Joanna Coles, former Editor-in-Chief of Cosmopolitan, who not only executive produces the show but lends her insights from years spent in the magazine industry.

Panic ensues when layoff rumors start circulating Scarlet. Kat learns she's safe, but then worries about her friends and the company's future.

The dread of losing one's job, or watching coworkers and friends lose their jobs, is real — approximately 7,800 journalists were laid off in 2019 alone, according to Business Insider.

“When I moved to Los Angeles years ago, there were already layoffs happening. Weekly magazines were turning into monthlies or monthlies turning into quarterlies. We were all sort of feeling on the brink of losing our jobs,” Straker Hauser says. “We wanted to explore what happens when the thing you can rely on is now no longer there, and how do you make it work?”

After launching a hashtag, Kat becomes the target of an online harassment campaign and receives death threats. Jane’s editor at Incite, an edgy new media company, publishes a hit piece with her byline on it. Chaos ensues.

Twitter can be a place writers share their work and support each other. But it also can be a hellscape of negativity, bullying, and trolling. The women of The Bold Type are very familiar with the dark underbelly of viral moments. At Incite, Jane writes a story on a young CEO, but when she finds out that there are issues with the products she's selling, her editor turns the story into a full-on hit piece. Readers join the attack, and the startup loses its investors. When Jane calls to apologize, her voicemail gets posted on Twitter and memed.

“That was based off of something that happened to me when I was working at newspapers and magazines,” Straker Hauser says. “I found myself apologizing for something I felt wasn't right and having it totally blow back on me. I wanted to show how it feels to get caught in the middle and having everyone get mad at you. And that was still a time we didn't have Twitter!”

After being offered a position as an assistant in the fashion department, Sutton realizes she can’t afford to take it. Surviving on such a meager paycheck is not possible, especially without any other financial support, so she starts negotiating.

To better remember what it was like to start out young, hungry, and underpaid, Straker Hauser and The Bold Type team talked to their own assistants and writer' assistants. "There is also an interesting dynamic with [Sutton's] friends who are in higher positions making more money," she says, "which confronts the reality of what it is like in your friend group when people move up at different rates.”

It's especially sticky territory considering that magazines attract people from many different backgrounds. Some, like Kat, come from money and have financial support that lessens their need for a livable wage, while others, like Sutton, arrived in the city with no connections to speak of. Straker Hauser wanted to reflect all these experiences and emphasize just how crucial a role finances plays in one's early career.

Given all the ripped-from-Twitter controversies on the show, there seems to be only one issue in online media The Bold Type has yet to mention: the proliferation of unions. So will we see a union form at Scarlet? Straker Hauser is considering it. “It is certainly a worthy and very relevant topic and one that we might revisit if we can find the space,” she says. Perhaps we'll see Jane signing a union card in Season 5.

More like this
Alan Carr's 'Changing Ends' Is A Witty Sitcom Based On His Own Life
By Darshita Goyal
What Is Pamela Anderson’s Net Worth? She Was Never Paid For Her Stolen Sex Tape
By Hugh McIntyre
The Mysterious Gunther Corporation From 'Gunther’s Millions' Has Dissolved
By Brad Witter
This Is When Netflix Is Going To Start Charging You For Sharing Passwords
By Darshita Goyal
Get Even More From Bustle — Sign Up For The Newsletter
From hair trends to relationship advice, our daily newsletter has everything you need to sound like a person who’s on TikTok, even if you aren’t.