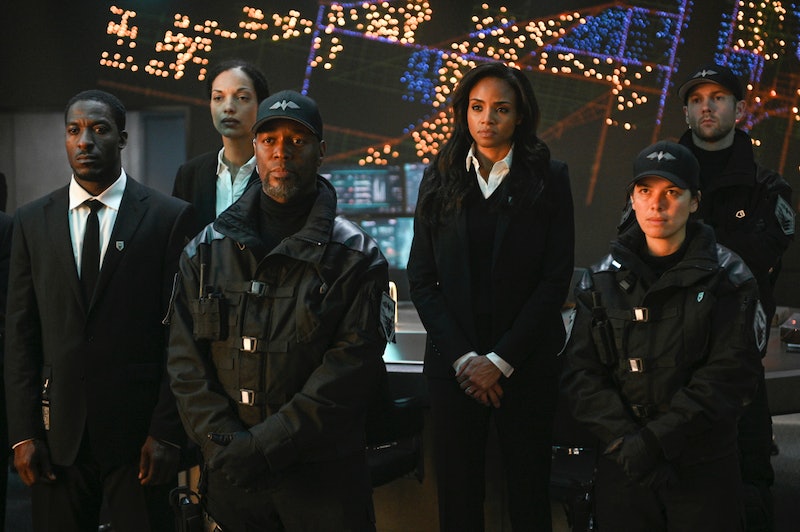 Batman couldn't do his job without the help of Commissioner James Gordon, and in Batwoman, it's Colonel Jacob Kane's Murder of Crows who are integral to Kate Kane's success. Called simply "the Crows" in the new CW show, this private special-ops team is a key part of Kate's story. In the Batwoman comics, the Crows are not just Kate's back-up — they're the ones who help mold her into the Batwoman that Gotham needs.

In the show, we're first introduced to Kate training with an Inuit elder somewhere in the arctic. Meanwhile in Gotham, Colonel Kane and his wife Catherine Hamilton present Crows Security, a new defense force created in Batman's three-year-long absence, at a gala. When Alice and her Wonderland gang crash the gala and kidnap current Crows member (and Kate's ex-girlfriend) Sophie Moore, Kate dons Batman's suit and rushes to save her. Later, the Crows uncover that one of their members, Dobson, is working with Alice, and make plans to track him down.

As for the reappearance of Batman, Colonel Kane brushes it off as a weak (and male) copycat, not realizing it's his own daughter. "Seen these wannabes before," he tells his team. "He gets the city all hot and bothered, and then thanks to a total lack of skill, he usually dies in some spectacular fashion."

Crows Security in Batwoman looks similar to the DEO in Supergirl, complete with a high-tech lair and numerous agents, both in the field and behind the computers. It's all very legit, well-funded, and professional looking, which is a stark difference from how the Crows are portrayed in the comics.

The Crows first appear in J.H. Williams III and W. Haden Blackman's Batwoman (2011) issue #0. After Colonel Kane learns that Kate has been donning military gear and fighting crime at night — a bit for the thrill, but mostly because she's haunted by her mom and sister's deaths at the hands of terrorists — he sends her away to train with his Murder of Crows black ops team. He hopes the harsh training will dissuade her from a life of vigilanteism, but barring that, he acknowledges he can at least properly prepare her.

Including Jacob Kane, the Crows are comprised of about six guys, and their backgrounds vary from Navy SEAL sniper to MMA expert to demolitions and small arms expert. Kate notes that "more than once, I questioned whether or not they had 'gone off the reservation.'" Kate describes her training at first as an "adventure," with her leaping across buildings in Tokyo, jumping off Swiss mountains in a glider, and speeding through London traffic on a motorcycle.

However, the last 12 months of the training is torture for Kate: running 36 miles with broken ribs, climbing buildings with a dislocated arm, cage fighting in Serbia, surviving the Sahara, and then enduring actual torture techniques, from waterboarding to being forced to stare at gory crime scene photos. This is where Colonel Kane does his best to dissuade Kate from crime-fighting — great parenting technique there, Jacob — but it doesn't work. After Kate proves she won't kill even after flying into a rage, the Crows graduate Kate, and she returns to Gotham as Batwoman.

Later, the Crows reappear to help train Kate's sidekick and cousin, Mary Elizabeth (Kate's stepsister in Batwoman) to become the superhero Flamebird/Hawkfire. (Her training involves way less torture than Kate's, and more hand-to-hand combat in a shady basement.) They also assist Kate and Mary in rescuing Alice (revealed to be Kate's twin sister Beth), who at that point is actually under DEO custody.

While the Crows on the show didn't have a hand in training Kate before she became Batwoman like in the comics, it's clear that they'll end up working together in the future — perhaps begrudgingly, if Colonel Kane and Catherine's unhappiness at "Batman's reappearance" is anything to go by. This iteration of the Crows may be less than enthused to see the bat symbol flying high again, but when it comes to protecting Gotham, the Crows will need all the help they can get.