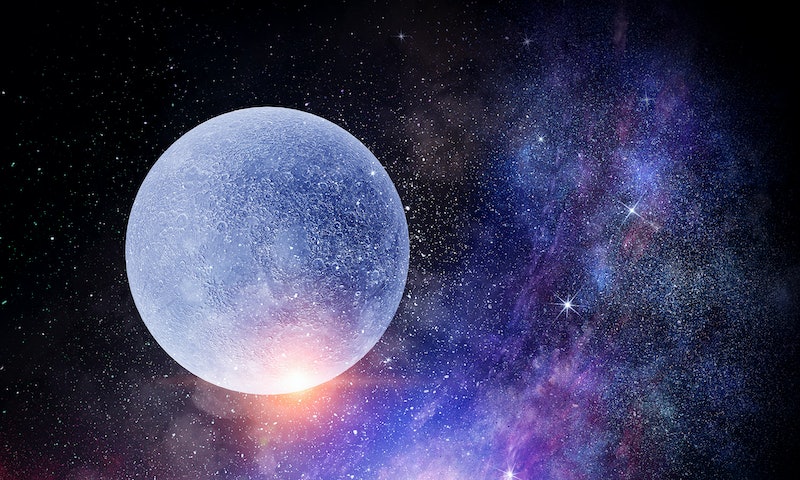 When I was a kid, my older cousin told me that it wasn't safe to go outside at night during a full moon. "It can make people crazy, you know," they said with all the teenage authority they could muster. Their attempt to freak me out worked, and I swallowed the lie hook, line, and sinker. I believed that the full moon affects the human body for way longer than I should have, and to this day, still get a little creeped out when I see a big round moon lighting up the sky.

For about as long as people have turned their faces upwards to marvel at the bright celestial bodies, the moon has been regarded as a powerful entity. As it turns out, I was not the only one to attribute special powers to the full moon. Beliefs that a full moon can change and control the human biology or behavior still persist to this day. The European folkloric creature of the werewolf still features in our movies and TV shows, and the phrase "must be a full moon" continues to pepper our conversation, explaining the unexplainable. But there is little factual evidence to support them. It seems the lunar cycle cannot control our periods after all. Phew!

Here are the many ways that the full moon supposedly affects the human body. Be sure to read through them so next time an older cousin tries to frighten you, you can show them the facts (and make them buy you a soda).

Many theories from ancient civilizations link the phases of the moon with women's menstrual cycles. They cite the similar duration of the two as evidence for the connection. While the moon's cycle is fixed at about 29.5 days, a woman gets her period on average every 28 days (though this varies from person to person). Despite this intriguing coincidence, there is no hard evidence supporting that the moon and menstruation is connected in any way. Studies are inconclusive as to whether more women have their period around the time of the full moon, and whether it would be conclusive of anything at all. So if by chance you happen to get your period early on a full moon, it's probably stress, and not some mystical lunar power that is making you grab a tampon early.

Early civilizations believed that the moon played a role in fertility, even determining when a woman could become pregnant. While fertility methods based on moon cycles have proven ineffective, to this day some believe that the full moon causes an increase in births. But do not fear mothers-to-be, the gravitational pull of the full moon will not make you go into labor! Studies have found no correlation between full moons and baby booms. The myth is attributed to the strong belief in some cultures that the moon and the menstrual cycle are connected.

3. The Moon Can Trigger Epileptic Seizures

Epileptic seizures were once blamed on witchcraft and possession, instead of processes inside one's own body. While those explanations seem silly today, the myth that a full moon can cause or worsen epileptic seizures persists. After hearing patients frequently blaming the full moon for their seizures, Dr. Selim Benbadis, MD, associate professor of neurology and neurosurgery at the USF College of Medicine attempted to find a scientific correlation. The 2004 study published in the journal Epilepsy & Behavior found no connection between the two. The study found that the number of seizures were highest in the moon's last quarter and at their lowest during the full moon.

While this may have been true before electricity, the moon's influence on our sleep-wake cycle today is negligible. No viable significant correlations have been found between the full moon and sleeplessness, so you are just as likely to get a peaceful night's rest during a full moon, then other lunar stages. That glowing smartphone on your nightstand, however... now that could keep you up.

5. The Full Moon Makes Us Crazy

That a full moon can make us a bit loony is one of the most prevalent and hard to shake beliefs. The words "lunacy" and "lunatic" stem from the word "Luna" — the name of the ancient Roman moon goddess. Hippocrates, Aristotle, and Pliny the Elder blamed mania on the evil influences of moon goddess, and these associations continued through the middle ages and today. While there is no factual evidence tying the moon to erratic behavior, one theory suggests that the bright light of the moon kept people awake, their bad behavior caused by sleep deprivation. According to research, the number of psychiatric and emergency room visits is no higher around the time of the full moon than on other nights. I hate to disappoint, but the "Transylvania Effect" will not transform you into a werewolf or vampire.

Another popular belief is that people are more likely to get attacked by animals when the moon is full. Proving this scientifically has been tricky, producing conflicting results. One study published in the British Medical Journal stated that bites from animals sent twice as frequent in a British emergency room during a full moon, while another stated that dogs in Australia bite the same amount of people during a full moon as any other time. Another study found that pets were more likely to visit the vet on nights when the moon was full and bright, suggesting that they are more active and taking more risks.

Doctors refused to operate on nights when the moon was full, but this connection has been proved to be a fallacy. A 2009 study published in the journal of Anesthesiology proved that the phases of the moon had no effect on heart-related surgery. After tracking results of operations performed at the Cleveland Clinic between 1993 and 2006, they found no correlation between the time or day of surgery and its success. It's better to get a good doctor than worry about the visible size of that big rock in the sky.

Seems the full moon has been taking an awful lot of flack for the past couple thousand years. I feel kinda bad for it.

This article was originally published on Sep. 23, 2016