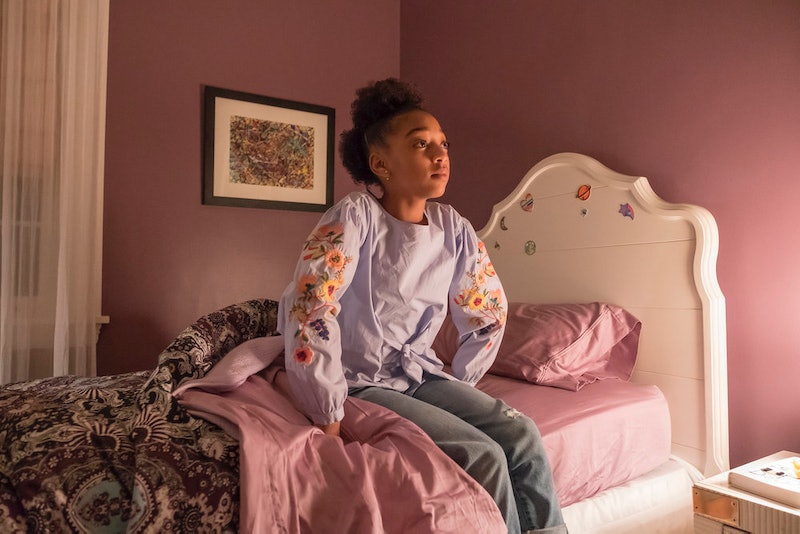 The This Is Us Super Bowl episode delivered some expected answers (how Jack Pearson died), but also delivered a twist that prompted more questions. The Feb. 4 episode introduced a future timeline, in which we saw Randall's daughter Tess as an adult. How Future Tess affects This Is Us in the present remains to be seen, but 12-year-old actor Eris Baker, who plays present-day Tess, provides Bustle with some insight into how this revelation could change her character going forward.

Previous episodes had included an unnamed social worker in the foster care system talking to a young boy — one that viewers thought would end up as Randall and Beth's next foster child. The Feb. 4 episode, however, revealed that the caring social worker was Tess in the future. It seems that her career choice was inspired by Randall and Beth's present efforts as foster parents to a teen named Deja, who returned to the Pearsons at the end of the Super Bowl episode for currently unknown reasons. Baker was surprised and pleased that her character's future self took on the noble profession.

"I was super happy, because I think that that's great that Tess wants to give back to the less fortunate," Baker says via phone. "I love how Tess is and her Dad's relationship is great, and Beth and Randall did fostering and Tess loves that they're fostering, so I think that was a great connection that they made."

The revelation about Future Tess' career was also a surprise for the audience, considering how Present Tess has shown a bit of angst about the Deja situation. Present Tess acted out a bit when Deja left the Pearsons to rejoin her birth mother, and hid in her Uncle Kevin's car, which he was drunkenly driving. Fortunately, nothing happened to her or Kevin on that ride.

Then, in the Super Bowl episode, Tess told her father that she felt like he wanted a new life by wanting to foster another kid and Randall assured her that wasn't the case. At the end of the episode, Tess watched as Beth and Randall answered the front door and comforted a distraught Deja.

In that moment, Baker felt that Tess wasn't threatened by Deja's return, but that her character was glad to see the teenager return to the house. "I feel like the conversation with Randall made her understand that Deja coming back into his life doesn't mean that, 'I'm not enough,'" she says. "It just means we're bringing more love into the family, more care for another person."

Now that fans know about Tess' future career, this means that the present timeline may include young Tess getting closer to Deja and perhaps asking Randall and Beth more about the fostering process. While This Is Us previously just explored past and present timelines, the introduction of a future timeline creates new storytelling possibilities for every Pearson family member — including Tess. The audience could get to see how her interest in social work may develop as a teen or a young adult.

And Baker is looking forward to exploring those possibilities in the series. "Tess is really, really growing as a character and there's lots of other information that needs to be said, like why [did] Tess want to become a social worker?" the actor says. "And how does Tess feel about Deja? I feel like they're still a little unclear on exactly what we need to know."

In real life, Baker appreciates the opportunity to work opposite talented actors such as Milo Ventimiglia, Mandy Moore, Sterling K. Brown, and Susan Kelechi Watson. "I realize every time I'm with them that I'm learning every single day and it's really helping me for my future projects and everyone's amazing," she gushes.

Baker says especially learns a lot from the scenes she shares opposite Brown, a two-time Emmy winner. "When I see him and how he prepares for his lines, how he acts out his lines, I feel like I learn a little bit more," she says. "I feel like a learn a little bit every time I see him, like the way he acts, the way that he can just cry on the spot and it's so inspiring."

And it sounds like both Tess and Baker will have opportunities be inspired in the present and future timelines on This Is Us, airing Tuesdays at 9 p.m. ET on NBC.