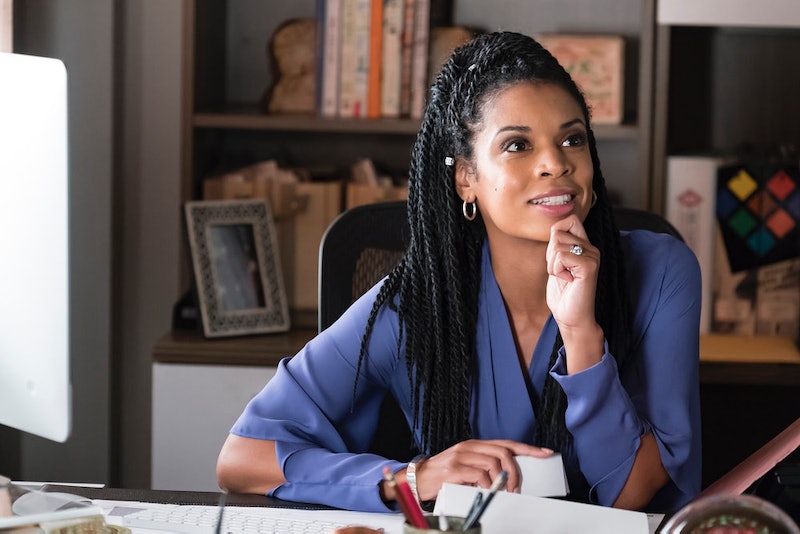 It's official; This Is Us has turned fans everywhere into master conspiracy theorists. Thankfully, at least one fan theory about TV's favorite beleaguered family isn't coming true anytime soon. Glamour has confirmed that Beth is not dying on This Is Us. Executive producer and co-showrunner Isaac Aptaker confirmed that this is one sad theory that isn't worth fretting over. Beth will live on to continue kicking butt and being the exasperated voice of reason in the Pearson family's dramas.

The "Beth is going to die" theory took off earlier this week after TVLine posted a blind item suggesting that a popular broadcast show that had been on air for less than three seasons was thinking about ending the season with one character being diagnosed with terminal cancer. Given how much This Is Us loves to break the hearts of its fans, it seemed liked the obvious candidate. Fans latched onto the recent flashforward of a future Randall visiting Tess sans Beth (and wearing a coat over his arm, obscuring his wedding band) as evidence that Beth was not long for this world. Happily, Aptaker has shot this particular rumor down.

The co-showrunner told Glamour of the fan theory,

"I just heard about it this morning. I don't know where that came from. It's nothing we've talked about in our writers room, so unless there's some fan fiction making its way to set and getting filmed, I don't think that's in the works for Beth! You can tell your readers that Beth's OK."

Someone break out the bubbly, because just the thought of losing Beth was enough to send even casual viewers running for the tissues. After all, Beth is the actual best, and her marriage to Randall is one of the show's best relationships.

While Beth isn't going anywhere, Aptaker was a bit cagier about the futures of the rest of the characters. This Is Us is a show about family, and as a result, the topic of loss is unavoidable. The show has already taken viewers through the painful deaths of Jack and William, but that's no guarantee there's not more heartbreak to come — especially now that the series is delving into the future of the Pearson family.

Randall and Tess' flashforward sequence wasn't just a one-off moment. It sounds like This Is Us will continue to offer up scenes set in the future. And there's no guarantee that every character you know and love will be there. Aptaker told Glamour,

"Yes, I do know [the fates of all the characters], but I can't tell you yet. We are going to start dabbling in the future though going forward. It's so much fun getting to imagine what these characters are like 10 to 15 years from now."

There's no telling what the future holds for the Big Three just yet, but knowing that Beth will continue to be a presence on the show for some time to come is a major relief. Whether or not Beth and Randall are still married in 10 or 15 years, you can bet Beth will still be her amazing boss self. (Although, if they're divorced, the internet may explode, because come on, if any couple was made to go the distance it's these two.)

After nearly two seasons of unraveling Jack's death and watching William slowly fade away, it would be nice to see This Is Us explore a few other relatable family topics for a little while. Losing Beth, after going through so much pain already, truly would have been too much for the series. Through everything Beth has emerged as the family's rock — she's smart, funny, an amazing mom and foster mom, and basically the best wife ever. She also has so many more stories tell, which makes This Is Us' decision to debunk this particular fan theory a wise one.