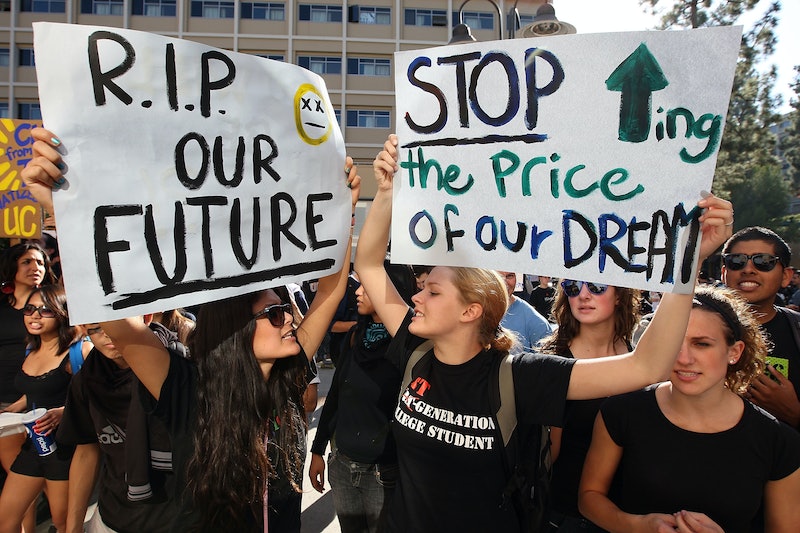 Curry Oglesby still gets a little agitated while recounting the moment when she found out that men managing car rental branches the same size as the one she led were making more money than her. Six years ago, not only was her financial security diminished because of the gender pay gap, but her wages were being garnished because she had defaulted on her $16,000 student loan debt.

"Especially as a young person, and a young woman, in a very male-dominated career… they expected men to prevail. They looked like the leader," says the 31-year-old, who now works in commercial real estate marketing in Washington, D.C. "They looked like the manager."

Oglesby was struggling to make ends meet at the time, as 15 percent of her paycheck was automatically being withdrawn for her loan payments. So when she found out about the pay discrepancy, her mind turned to how much better off she would be if she were paid fairly.

In conversations with Bustle, three women say their student loan debt created a heavy financial burden that would have been greatly decreased if they had made more money. Women in America make, on average, 80 cents for every dollar paid to men; for women of color like Oglesby, the gap is even wider.

On top of making less than men, women also hold two-thirds of the United State's $1.3 trillion outstanding student loan debt, according to a 2017 report from the American Association of University Women (AAUW). The double-whammy of lower wages and a higher debt burden makes it even more difficult for women to pay off student loans. It also means women, including those who are paid the same as their male peers for the same work, are taking home even less money after paying down their debt.

Gail Larralde, a 59-year-old nurse with more than $200,000 in student debt, doesn't work directly with any men in her job reviewing Medicare claims, but she notes men climb the ladder much quicker within her industry as a whole. While women make up nearly 80 percent of health care workers, not a single Fortune 500 healthcare company had a female CEO last year, according to Rock Health's 2017 Women in Healthcare report. Just 22 percent of board members at those companies were women, the report also found.

Women buried in debt can find themselves on what feels like a never-ending hamster wheel, where they are working constantly but still unable to make their loan payments on top of rent, bills, and other everyday living expenses. Larralde has stayed in school for the past decade, because once she's no longer a student she would have to start paying off her loans — and she can't afford payments as high as $2,500 a month. She's completed an associate's, a bachelor's, and a master's degree, yet hasn't been able to land a higher-paying job.

Although she says she was told she would qualify for the federal Public Service Loan Forgiveness program, Larralde says she was later denied because she works for a government contractor, not the government itself.

"Coming out with that type of loan balance, I feel betrayed and almost insignificant and unimportant to society," Larralde says. "I worked so hard... to establish myself as a competent career woman."

Oglesby found herself in a similar position when she graduated from college in 2009 and was unable to find a job in her field. While working in retail right out of college, she wasn't making enough money to pay rent and her loan payments.

"Even once I got a better job with better pay, I was already far behind," she tells Bustle. "It really threw me for a loop."

Though Oglesby completely paid off her $16,000 debt a few months ago, having her wages garnished while she was making less than her male peers put her at a financial disadvantage in her 20s. Every time she had a new job opportunity, she had to factor in how much money she needed to get by as well as make progress on tackling her debt.

Cheryl Koning, 32, graduated $75,000 in debt in 2008 and ultimately switched career paths in order to make more money to put toward loan payments. A month into her first public relations job, she realized her paycheck didn't stretch far enough.

"Literally after taxes, I couldn’t afford my loans and rent, let alone groceries or medical care, or anything else," she says. "So it was a wake-up call."

Koning went back to nannying, which she had done to supplement her studies. Right away, she was taking home more money, and unintentionally carved out an entirely new career path for herself looking after children in Chicago.

For women with student loan debt, the number they owe is always looming in the back of their mind. It's there when deciding which bills get paid that month; it's there when mulling over a job offer; and it's inevitably there if and when they discover they make less than their male peers.

The 2017 AAUW report included recommendations for ways that lawmakers can address women's student loan burden. Congress can protect need-based federal Pell Grants, make refinancing possible for both federal and private student loans, and help cover other costs that many students can't afford, including child care. The AAUW also calls for Congress to update the Equal Pay Act of 1963 and prohibit employers from using a potential employee's salary history to determine pay, a practice that New York City outlawed last year.

"A gender pay gap means a longer road out of deeper debt," the report reads. On top of treating all employees as equals, ending discriminatory pay would also lower the United State's cumulative student loan debt. The myriad financial disadvantages women, and especially women of color, face are all intertwined; addressing the wage gap would effectively reduce the burden of those other financial disadvantages, too.

More like this
25 Inspiring Quotes From Black Women To Celebrate Black History Month
By Kyli Rodriguez-Cayro and JR Thorpe
24 History-Making Black Women You Probably Didn't Learn About In School
By Ayana Lage and JR Thorpe
This Is When Netflix Is Going To Start Charging You For Sharing Passwords
By Darshita Goyal
Twitter Has *A Lot* To Say About The "Single Penalty”
By Sam Ramsden
Get Even More From Bustle — Sign Up For The Newsletter
From hair trends to relationship advice, our daily newsletter has everything you need to sound like a person who’s on TikTok, even if you aren’t.