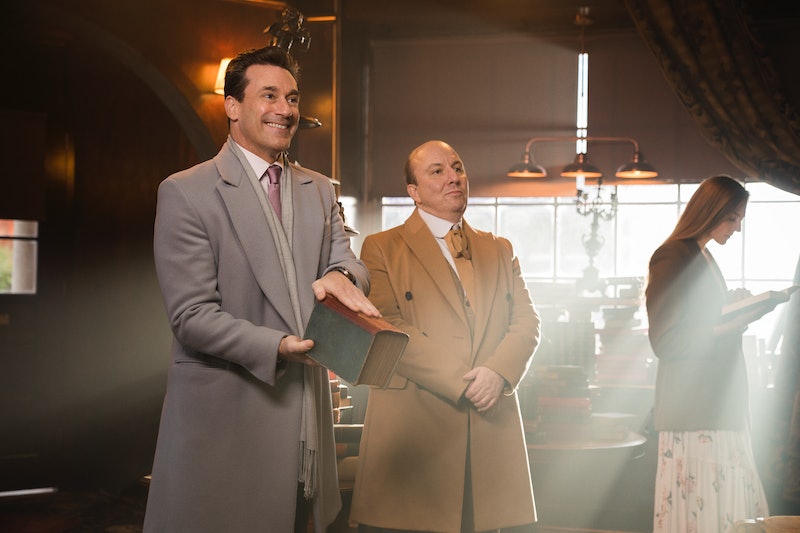 There's a healthy amount of reverence for the 1990 novel Good Omens: The Nice and Accurate Prophecies of Agnes Nutter, Witch at the New York City press junket for Amazon's upcoming TV adaptation. And there ought to be, considering Neil Gaiman, who co-wrote the beloved comic fantasy with the late Terry Pratchett, is showrunning. But the key to realizing this story of angels, demons, witches, and witch hunters onscreen was to not be impeded by that reverence. As the show's cast and creative team tells Bustle, there was still a lot of room to play; they wanted a reimagining, not a direct recreation.

According to Gaiman, the project hinged on "the willingness to say to incredibly talented people, 'You can come to us with your maddest ideas.'" When their department heads questioned that he and director Douglas Mackinnon really did want them to push their concepts to the limit, Mackinnon assured them, "We don't want you to self-censor." To illustrate the tone of Good Omens — which ranges from prosaic to full-on fairytale — he referred the team to the piano solo in the David Bowie song "Aladdin Sane," which "goes all over the place and still works... that's us."

Michael Sheen and David Tennant head up an enviable ensemble of actors, playing the angel Aziraphale and the demon Crowley, respectively. Though competing agents for heaven and hell, the two have fallen in love with life on Earth and, determined to stay there, team up to thwart the coming apocalypse. And there was nothing about the reputation of the novel and their iconic characters that made them feel boxed in.

Sheen says that his first step in preparation was to reread the book and look for any "concrete details" about what undercover angel and bookshop owner Aziraphale "looks like or wears or sounds like." He found that there's actually "very few of them," and yet you still "get such a strong sense" of the character.

Tennant, meanwhile, finds that it's now impossible to divorce his take on Crowley, a swaggering demon with a soft spot for humanity, and the way he was written in the book. "We were certainly encouraged to be creative, and Neil was a very successful showrunner in that way," he says. "He gives you a very fully fleshed out world to inhabit and at the same time is generally interested in what you've got to bring to it."

But, in true Good Omens fashion, his interpretation was only a jumping off point. Just as Aziraphale and Crowley's lives and journeys become intertwined, so did Tennant and Sheen's performances.

"I think the most significant part of it, for me at least, came out of us just working together," Sheen adds. "We started to sort of define each other, and that, I think, is as it should be. Because it is the relationship and the dynamic between them that is the engine of the piece."

Jon Hamm came into the adaptation under different circumstances, playing the angel Gabriel, who is only mentioned offhand in the novel. The actor also has a lot of love for the original Good Omens, saying, "I think it was the first novel that I read — or at least lengthy novel — that wasn't assigned." Talking to Gaiman about what he and Pratchett had intended for the character in the as-yet nonexistent sequel, Hamm came to understand that the angel is, in the simplest of terms, a "manager." He compares him to Michael Scott, which is apt, especially in a scene where Gabriel tries — and fails — to blend in amongst the humans on earth.

"It's like the telephone game," he says of heaven and hell's increasingly hapless minions. "Take a very simple order and f*ck it up the more times it gets relayed down the line. I think Gabriel is probably the first one of those who's like, 'I got this,'" when, clearly, he doesn't.

The Good Omens cast, on the other hand, had full faith in their bosses. Having Gaiman on set meant that the source material had a caretaker. The actors didn't have to worry about protecting the story, just doing their individuals jobs to the best of their ability.

"Neil's attention to quality control and detail is very reassuring from that standpoint," Hamm says. "You can just tell how much he cares about this particular piece of storytelling, not just because of his co-creator and friend who he feels he owes a debt of gratitude to, but because he cares about what he does."

Adria Arjona, who plays modern witch and keeper of prophecies Anathema Device, notes that Mackinnon did his fair share of preservation as well. "He had like four or five iterations of Good Omens and they were a disaster," she says of the highlighted, dog-eared novels the director kept on set. "All he wanted at all moments was to recreate this cinematically for Neil."

So, why a six-episode limited series as opposed to any other way this adaptation could have been conceived? Well, Gaiman says, the answer is maybe simpler than you'd expect. "It was going, 'OK, I think it's going to be six parts, because eight feels too long and four is too short," he explains with a smile. He divided the novel into six parts by Post-It note, then added and shuffled plot as necessary.

"We're not on an unlimited budget, and we're looking at cuts," Mackinnon remembers from one particular meeting. "And Neil's comment, which [prompted] the executives' ashen faces, was, "We'll just keep the bits that everybody loves." And they all went, 'Yeah, that's a really good idea... wait a minute!'"