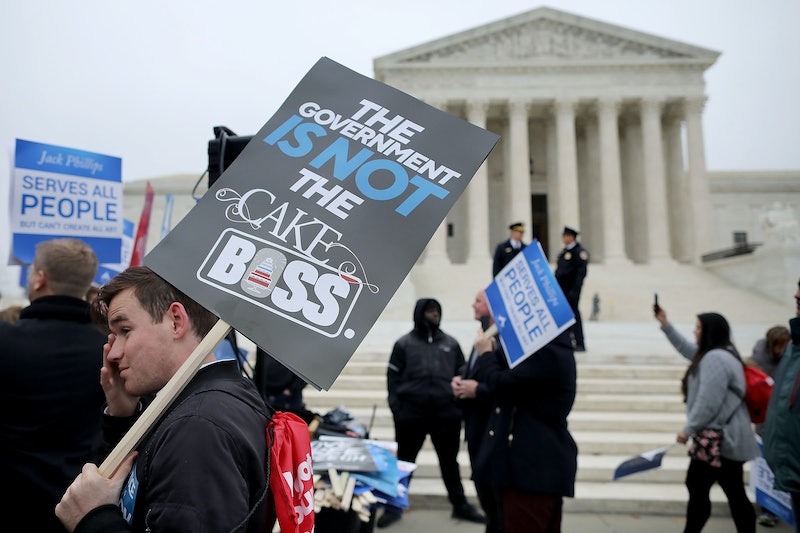 The National Women's Law Center, along with 39 other women-centered organizations, filed a friend-of-court brief in the Masterpiece Cakeshop case arguing that how the court rules could open the door for discrimination against women as well.

The YWCA (Young Women's Christian Association) is one of the 40 groups signed on to the friend-of-court brief. Of the threat posed to women's equality by the Masterpiece Cakeshop ruling, CEO of YWCA Alejandra Y. Castillo tells Bustle:

First, let’s be clear that queer women stand to lose the most from this ruling and others like it. Not only do they face discrimination as a result of their LGBTQ+ status, but also as women. With that in mind, we also know that for generations, all women were treated as second-class citizens under the law, with women of color facing the most institutional discrimination. Today, we still face many inequities, but we can’t ignore the gains that have been made and the importance of protecting them.

Castillo's concerns are echoed in the legal brief, which states toward the beginning, "The benefits of public accommodations laws are at risk of unraveling if courts create constitutional exemptions for commercial businesses that raise religious objections to serving members of protected groups."

Women are considered a protected group, and for good reason. Castillo notes "that only one generation ago hotels, restaurants, bars and athletic facilities could prohibit women from patronizing them." Though they may not initially appear related, Castillo is making the case put forward in the brief — women's rights are implicated in the SCOTUS ruling on Masterpiece Cakeshop.

To understand the argument, it's key to understand the case itself. In 2012, Charlie Craig and Dave Mullins went shopping for a wedding reception cake. Their search brought them to Masterpiece Cakeshop in Lakewood, Colorado, where Jack Phillips had been selling his bakery goods for 19 years.

While Phillips said he had no problem selling the couple his non-wedding-related pastries, the cake baker would not make them a wedding cake. According to the Alliance Defending Freedom (ADF), the organization representing Phillips before the Supreme Court, "As a Christian, he [Phillips] believes that marriage is the lifelong union of one man and one woman." Given his faith's "utmost importance," the ADF goes on to say Phillips "serves everyone, but he cannot celebrate every event."

The ensuing legal battle pitted self-proclaimed defenders of religious freedom and free speech against vocal supporters of equality who seek to end discrimination in public commerce.

For the 40 women's rights organizations endorsing the friend-of-court brief supporting Craig and Mullins, siding with equality is the clear choice. Doing the opposite, they argue, could imperil not only strides made toward equality by the LGBTQ community, but also by women.

As the National Women's Law Center argues in its brief, "The Company [Masterpiece Cakeshop] advances a number of First Amendment defenses to discrimination on the basis of sexual orientation which, if accepted, would undermine antidiscrimination laws aimed at guaranteeing equal opportunity for full participation in our society for women."

They first take issue with the argument that should Phillips have baked a cake for the same-sex couple, he would "tacitly" be endorsing their union. "Commercial businesses do not — and cannot conceivably — endorse each and every customer they serve," the brief states.

The brief goes on to examine what such a ruling might allow, if taken to its "logical conclusion":

The brief also takes aim at the argument that Phillips, in his uniquely "artistic" endeavors, should be exempt from using his creative gifts to make something in service of an act his religious beliefs deem wrong. The authors argue that underestimates the amount of creativity inherently present in a range of occupations, from business card designers to florists to jewelers. A number of hypotheticals are provided in which a business owner could potentially deny services to a woman under the protection of religious freedom and artistic freedom (for example, refusing to design a wedding band for an interracial couple).

It was an argument echoed in yesterday's SCOTUS hearing. Responding to arguments from Phillips' lawyer that special consideration for his artistic involvement made this case unique, Justice Elena Kagan asked, "Woah, the baker is engaged in speech, but the chef is not engaged in speech?" She also suggested makeup artists, jewelers, and hair stylists would potentially be free to discriminate against customers under the same argument.

As millions await the SCOTUS ruling on Masterpiece Cakeshop, the National Women's Law Center and the 39 organizations endorsing their brief will no doubt be hoping the court rules against the Colorado bakery — and protects women from discrimination by so doing.