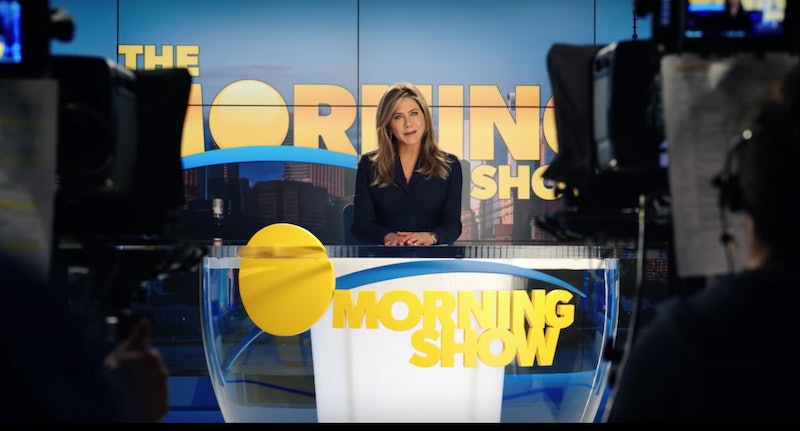 From Broadcast News to The Newsroom to The Post and beyond, the world of journalism has fascinated audiences by offering up dramatic portrayals of the news and the people behind it. Though the Apple TV+ drama The Morning Show tells a familiar story set in the high stakes, dysfunctional world of morning news, its inciting incident — the removal of anchor Mitch Kessler (Steve Carell) following sexual misconduct allegations — is a timely wrinkle that calls to mind the recent ousting of the Today Show's Matt Lauer.

Though it isn't based on any one event or person, The Morning Show remains rooted in the larger context of broadcast television, in no small part due to the expertise of consulting producer Brian Stelter, the host of CNN's Reliable Sources and author of Top of the Morning: Inside the Cutthroat World of Morning TV, which served as inspiration for the series. Speaking to Bustle, Stelter walked us through the reality behind all the rich details of The Morning Show.

In the opening moments of the show, Jennifer Aniston's news anchor Alex Levy turns off her alarm clock at 3:30 a.m. and begins a series of morning rituals, including limping onto the treadmill, cracking open a Red Bull, and applying under-eye patches in an attempt to wake up.

“When I worked on my book on morning television many years ago, what people kept bringing up were the hours, the insane hours,” says Stelter. “How the hours end up warping people’s worlds because you are starting your day at 1, 2, or 3 a.m. and how they have routines and rituals in order to grapple with the hours.”

In his research, he learned that famous news folks use a variety of tactics. George Stephanopoulos meditates when he wakes up, and Diane Sawyer famously stayed up later and later every night to the point where she was usually awake all night on Thursdays.

“The rhythm of the early morning schedule was something we needed to show right at the start of The Morning Show because it is so fundamental to this world,” Stelter says. “This scene captures that sense of being all alone in the world, trying to wake yourself up, trying to summon the strength to do this again for another day. That is real for some of these anchors who have been doing it for 10 or 15 years.”

2. Stress In The Control Room

Mere hours before The Morning Show goes on air, The New York Times breaks a story about Alex’s co-anchor, Mitch. The team must reshape the morning broadcast and bring news of his sexual misconduct to millions of people. The control room is in panic, the executive producer is stressed, and everyone is trying to figure out what happens next.

“The set and the control room looks like Good Morning America while the casting reminds me a bit of the Today show,” Stelter says. “Walking up and being told that your co-host is being fired obviously happened at the Today show, it happened to Savannah Guthrie one Wednesday morning, it happened to Hoda Kotb. They only had about three to four hours’ notice before going on the air, and obviously [Lauer] comes to mind when you see the scene, but The Morning Show goes in many different directions that don't remind me of the Today show.”

From the moment Alex learns of the allegations against Mitch, the entire network is scrambling to restructure the morning's programming and prep her for live television, all while keeping ratings top of mind.

“The hours leading up to 7 a.m. are off-the-wall intense, especially when there is breaking news,” says Stelter. “As one famous TV producer says, you don’t go on because you're ready, you go on because it's time. You're never going to be fully prepared when you are the host of these shows. You are always winging it to some degree.”

3. The #MeToo Movement In Morning News

Mitch was described as the “dad” of morning television until details of his sexual misconduct came to light. From there we watch him deny everything, destroy his television set, and scream about how Harvey Weinstein is the true villain. The show grapples with the very real #MeToo movement that has shifted the conversation around sexual assault and misconduct in the workplace.

“Network morning TV was obviously reshaped by #MeToo revelations with regards to Matt Lauer and Charlie Rose, most prominently,” Stelter says. “What we tried to do with this drama is not to reflect an individual episode or any individual account of wrongdoing but instead to learn from what is happening in real life and create a fictional world that can address these same issues and problems.”

After this story breaks, Alex condemns her co-anchor for his actions and expresses her deepest sympathies to the survivors who came forward. Meanwhile, Mitch is adamant that his crimes could not be “as bad” as some of the other scandals that had broken. In one of the most interesting scenes of the first few episodes, producer Mia Jordan (Karen Pittman) goes into Mitch's office and reaches for a button under his desk that shuts and locks the door, a clear reference to the one Lauer had in his office.

“What we have done is create this universe to explore, what happens to the disgraced man when he is at home and has lost his job? What happens to the women who are victims and are still working on the show?” Stelter says. “What I did in my role as a consulting producer was talk with the writers and producers about what was happening at these real shows, share my reporting and what I had been seeing from sources, and they took that and applied it to this fictional world.”

An open seat on The Morning Show's anchor desk incites some big competition from the remaining staff for the job, while network executives are breathing down producers' necks about falling ratings. Then seemingly out of nowhere, Bradley Jackson (Reese Witherspoon), a local reporter from the South, gets the spot.

“Some of the other co-hosts are coming to terms with Bradley suddenly getting the second seat and they are furious,” says Stelter. “There is a scene with Daniel [Desean Terry] who goes into Chip’s [Mark Duplass] office and says, 'Tell me why I should not hand in my resignation now,' and I found that scene to be such a real reflection of the cutthroat nature of television — of the ego management that takes place between executives and stars.”

Underneath every scene, stress is constantly simmering. The executive producer is often forced to not only plan the show but reassure both the talent and the network executives (played by Billy Crudup in the show) that everything is going exactly according to plan.

“That kind of two-timing double-dealing one star one thing, another star another, that is true to life dealing with the various egos and needs of the stars is another full-time job for these bosses,” says Stelter.

The competition is not just among the internal cast of characters but extends to their rival network (brought hilariously to life by Mindy Kaling). In the real world, this looks somewhat similar to Today and Good Morning America, two of the most-watched morning shows in the nation.

“This is a world that is cutthroat but very personal and tight knit if that is possible,” Stelter says. “There are 100 millions of dollars in ad revenue on the line, some of these people are making multiple millions of dollars a year in incredibly complicated jobs, but they also live within a few blocks of each other and see each other out on the town and can relate to each other’s crazy jobs.”

Alex shocked everyone by announcing Bradley would be the new anchor, especially since their initial meeting was a rather tense interview after a clip of Bradley confronting a man at a protest she was covering went viral. From screen tests to wardrobe options, their chemistry is key to the success of the show, and everyone is holding their breath to see how America will react to their on-screen rapport.

“The [first] scenes between Bradley and Alex, you see Bradley testing Alex. That is live TV at its liveliest, where you are up on a tightrope without a net,” Stelter says.

After winging it at a journalism award reception in announcing Bradley's hiring without any approval from executives, Alex must deal with the reality of her rash decision. Her contract hangs in the balance, and there is a lot riding on this partnership working.

“Live TV is the loneliest place on Earth," Stelter adds. "Even though millions of people are watching, there is nothing to catch you if you fall, and I think Alex is feeling that in the moment with Bradley and not knowing where Bradley is going to take this. What we see in that scene, in the control room everyone is just watching in shock because at that point, there is nothing more they can do — they can prep Alex and prep Bradley, but at that point, it really is on the host and the guest. That scene captures the electric nature of live TV.”