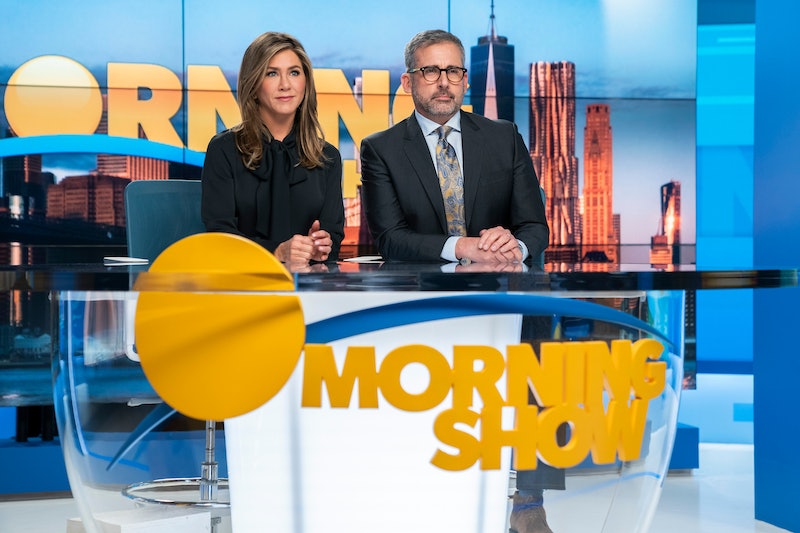 In the two years since the #MeToo movement has barreled through Hollywood, major power brokers like Harvey Weinstein, Les Moonves, and Matt Lauer have lost their jobs and been publicly scorned for alleged sexual misconduct. And since art imitates life, pop culture has begun telling #MeToo stories — both dramatizations of real situations (see: The Loudest Voice in the Room, Bombshell, Unbelievable) and fictional ones with strong allusions to current events (Unbreakable Kimmy Schmidt, 13 Reasons Why, Veep, the list goes on). While these shows and movies detail the experiences themselves, The Morning Show explores the aftermath of a #MeToo moment, choosing to focus less on the event itself and more on the tangential ripple effect that Mitch Kessler's (Steve Carell) misconduct has on everyone he encountered.

"The whole season is showing different avenues, shades — how the fallout [of sexual misconduct] affects everybody," showrunner Kerry Ehrin tells Bustle at the red carpet premiere of The Morning Show. The first moments of the series depict various UBA employees getting the call about Mitch — no one appears surprised to hear the news, though it's still a shock — and scrambling to address the news before anyone else. Mitch's co-anchor, Alex Levy (Jennifer Anniston), is particularly caught in the crossfire, as she has to make the difficult announcement on-air.

"This has been [Alex's] partner for 15 years, and all of a sudden, he's just gone," Ehrin says of Mitch. "When you rise to fame with a partner, and they're suddenly gone, or they're discredited, or they're shamed, it falls on you. So it was interesting to me to look at how that fallout came down on her and how she dealt with that."

Not well, as it turns out, and understandably so. The first few episodes depict the anchor lashing out, getting drunk, and generally spiraling out of control. To add insult to injury, Mitch informs Alex that the network is trying to push her out in favor of someone younger. So not only is she trying to save face, but she's also trying to save her job. "It's interesting just to look at a whole company and what people think happened, what they tell themselves happened, what really happened — it's all part of a big web," Ehrin says.

Indeed, Alex's coworkers can't help but wonder if she knew anything about Mitch before the news broke. She claims she didn't. "Yes, I worked side by side with Mitch for 15 years. God knows he was not perfect; I felt it daily," she says. "But I didn't know he was that guy, and that's a problem. I fell asleep at the wheel."

It would be a nice sentiment if Episode 3 didn't undermine it. In a conversation with producer Mia Jordan (Karen Pittman), it's revealed that Mia had an inappropriate relationship with Mitch at some undisclosed time. And while Alex states she didn't approve of their relationship, her colleague shoots back, "You're not impartial on this subject. You knew what Mitch was doing."

It's a tough needle to thread. One of The Morning Show's main criticisms has been that its #MeToo commentary is too sympathetic towards the perpetrator. There are long, lingering shots of Mitch trying to load his coffee machine and dissolving into tears because he can't get it to work. He's allowed to pale in comparison to Martin Short's character, whom Mitch calls a "predator" after realizing that the movie director has been accused of rape.

However, it was important to the showrunner to depict these nuances. "I feel like I start out as a sensitive person, so I feel like I always try to look at things in the most sensitive way that I can," Ehrin tells Bustle. "So I'm not really concerned about like, 'Oh, I'm going to be an asshole'.... So I guess the way I approach things is to just look at [the characters] as human beings and what they're doing and sort of give a bird's eye view to the audience to absorb it."

Alex's complicity is certainly a grey area, and one that The Morning Show doesn't cast judgment on in the first three episodes. The fallout of a sexual misconduct scandal is always messy, as the last two years have evidenced. And since the Apple show doesn't cast harsh judgment on its characters, audiences are left to decide for themselves.

More like this
At 14, Tatiana Maslany Was Obsessing Over Tamagotchis & The Spice Girls
By Gabrielle Bondi
It’s Official: 'The Bachelorette' Is No Longer A Fairy Tale
By Samantha Allen
The 'House Of The Dragon' Showrunners Revealed One Key Similarity With 'GoT'
By Grace Wehniainen and Kadin Burnett
An Ultimate Guide To The Music Of 'Rap Sh!t'
By Brad Witter
Get Even More From Bustle — Sign Up For The Newsletter