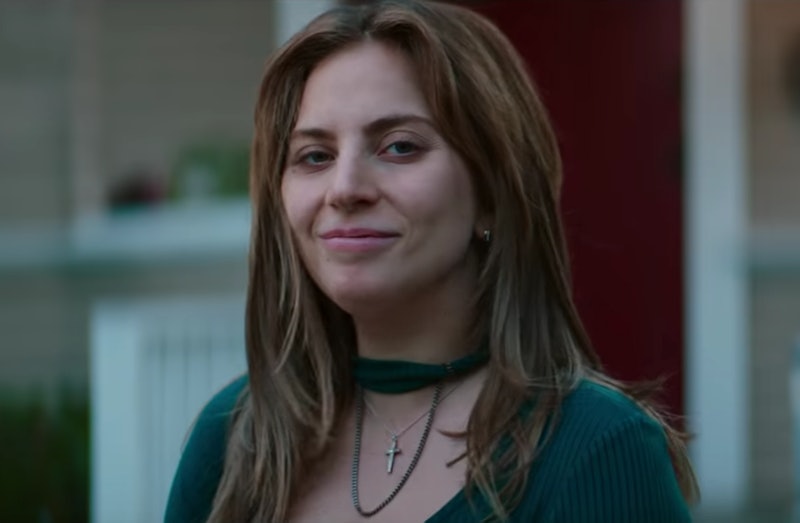 Lady Gaga delivers an arresting performance in A Star Is Born, partly due to her haunting, deep voice which fans already know well, and partly because her lesser known talents as an actor flourished. The movie feels deeply intimate, no less so because of the close-up shots of Gaga wearing almost no makeup for much of the film. More than being a vehicle for expressing her character's emotional journey, that face is also the subject of much debate in the movie. In fact, the obsession with Ally's beauty in A Star Is Born is an aspect that the movie doesn't handle as gracefully as it should.

The "star" in the movie's title refers to her character, Ally, whose career takes an almost overnight turn after she performs one of her songs onstage with grizzled country-rock star Jackson Maine (Bradley Cooper). In the beginning of the movie, Jack discovers Ally performing in full drag makeup — thin, fake eyebrows and all — in a drag bar. Afterwards, he meets her in her dressing room, where he tells her to take all of her makeup off. In an interview with The Los Angeles Times, Lady Gaga revealed that a similar scene played out before her 2016 screen test for the film. She said that Cooper requested that she perform “completely open,” and without "artifice," meaning sans makeup.

Later, the two have a conversation about Ally's insecurities about her looks. She says she's felt particularly insecure about her nose, which she believes prevented her from making it as a singer before. Considering that Lady Gaga shared her own story with The Mirror about someone in the music industry suggesting she get a nose job before her first single came out, Ally's story is both realistic and valid. What happens next in the movie is also realistic: Jack tells Ally that nose is beautiful, and that her face in general is beautiful too. Lady Gaga told The LA Times, "When my character talks about how ugly she feels — that was real. I’m so insecure. I like to preach, but I don’t always practice what I preach.”

From the beginning of Lady Gaga's career, the singer has advocated self-acceptance. In 2011, the the singer teamed up with Harvard University to launch the Born This Way Foundation which built an online community for young people to share their experiences and build confidence. In a 2013 interview with Glamour, Lady Gaga said that she didn't consider herself "conventionally beautiful." She added:

"If there was some sort of mathematical equation for beauty, I don't know if I would be the algorithm. I've always been OK with that. I'm not a supermodel. That's not what I do. What I do is music. I want my fans to feel the way I do, to know what they have to offer is just as important, more important, than what's happening on the outside."

The way that Lady Gaga preaches acceptance is much different than the way that A Star Is Born ultimately does, which is by showing Jack reassuring Ally that she is beautiful. That seems to be Hollywood's typical message of "acceptance" when it comes to a woman's appearance. It's also a failing of this year's comedy I Feel Pretty, in which women who may not be conventionally attractive are reassured that they're beautiful. Sure, beauty is subjective, but why does being considered physically beautiful always have to be framed as the greatest prize a woman can win?

Later in A Star Is Born, the couple has a tense fight while Ally's naked in a bathtub. Jack calls her "ugly," and Ally begins to cry. But she doesn't cry in that same scene when Jack tells her that she's selling out by becoming a mega pop star, and she doesn't cry when he tells her that she's not talented. It's the "ugly" comment that really gets to Ally, and that says a lot about the great cultural emphasis that we place on women to measure up to conventional standards of beauty. But A Star Is Born lacks any real critique of such pressures.

Instead, the movie carries on, using Ally's superficial insecurities as the basis for the character's most vulnerable scenes, which allows audiences to continue on believing that beauty is a valid goal for women to desperately strive for — and are we not past that? Ironically enough, Lady Gaga herself is an artist whose success might indicate that our society could move past obsessing over how women look. If you put Gaga's statements about feeling ugly into the context of the artist's work, it becomes crystal clear that the artist wants to express what it's like to feel and be "ugly."

Fans call Gaga Mother Monster, and she calls her fans Little Monsters, as if to indicate that being grotesque and feeling ugly isn't something that needs to be fixed with the reassurance that "you are beautiful" or that "everyone is beautiful." Gaga has embraced ugliness perhaps like no other female artist has before, as she's challenged conventional standards of beauty within the tight constraints that bind women in pop culture.

When Lady Gaga showed up to the 2010 MTV Video Music Awards in her infamous meat dress, the "Bad Romance" singer wasn't as concerned with appearing beautiful as much as she was with making a statement. Gaga explained her shocking fashion choice on The Ellen DeGeneres Show, saying, "It has many interpretations, but for me this evening it's [saying], 'If we don't stand up for what we believe in, if we don't fight for our rights, pretty soon we're going to have as much rights as the meat on our bones.'"

In making her outrageous fashion statements, whether it be at the VMAs or elsewhere, Gaga has proven that female artists, or even just women in the public eye, have the power to change the conversation from "how gorgeous did she look?" to "what does that mean?" or "what is she trying to say?" And her videos can speak to that narrative as well. Her 2009 music video for "Bad Romance" is filled with eerie distorted images of the pop star and other women that may have creeped you out or sent a shiver down your spine the first time you saw them. The visuals aren't beautiful by conventional standards, but they're haunting and they're expressive.

Critics have generally agreed that A Star Is Born is both a hit and one of the better versions of the story. (Three other versions came out in 1937, 1954, and 1976.) Clearly, the story about a talented ingénue who gets discovered by a self-destructive addict can endure the test of time. But if existing narratives continue to get reshaped and retold by Hollywood, the leading female characters deserve to be more thoughtfully treated.

That's not to say that movies should never include storylines about women's insecurities about their appearance, because that's a real problem that even the most successful women face. But in 2018, would be one that reassures women not that they're beautiful no matter what, as Jack reassures Ally in A Star Is Born, but one that promises a woman that her appearance isn't the most important thing about her. Perhaps movies can even start exploring storylines that outright celebrate the ugly and the grotesque, like Lady Gaga frequently does in her work. In 2018, women — including fictional women — should be allowed to not meet every conventional beauty standard.

Lady Gaga has consistently said in interviews that she views Ally as a different version of herself, so it's unfair to hold the character to the actor's artistic standards. In her interview with The LA Times though, Gaga said that she still cares most about the substance of her performance.

"To be honest, I think what makes me feel beautiful is when I see happiness in my fans," Gaga said. "When I see or hear from them that the music that I’ve made has changed their life in some way, that’s what makes me feel beautiful. Because this is just the outside, you know? And at the end of the day, I could be in a million movies and put out a million songs and everyone could say, ‘She was so beautiful,’ but that’s not really what I want. I want them to say, ‘I saw that movie and I cried my eyes out and I learned something about myself.'"

Even if Hollywood continues to tell stories that suggest women should strive to accept their appearance and consider themselves beautiful, Lady Gaga serves as a performer who reminds us that we don't have to look beautiful to feel it.

More like this
Twitter Is Identifying With Sally Field & Jane Fonda’s Friendship In New Viral Video
By Jake Viswanath
Austin Butler Recalls Lisa Marie Presley Showing Him Elvis’ Bedroom
By Jake Viswanath
Pamela Anderson’s Dating & Marriage History Could Be Its Own TV Series
By Jake Viswanath
Jennifer Coolidge Hunted For Jewels & Lashes In J.Lo’s Hotel Room
By Jake Viswanath
Get Even More From Bustle — Sign Up For The Newsletter
From hair trends to relationship advice, our daily newsletter has everything you need to sound like a person who’s on TikTok, even if you aren’t.