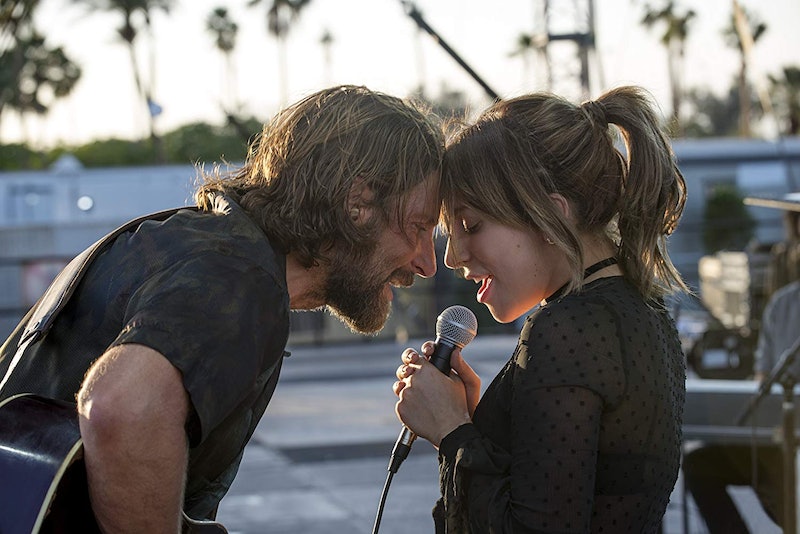 The story of A Star Is Born has been told before. The latest version, which opened this past weekend and stars Lady Gaga and Bradley Cooper, is the fourth film iteration of the tale. (Fifth if you count 1932's What Price Hollywood? as direct inspiration for the rest.) So, knowing that audiences are familiar with the narrative of an up-and-coming female artist and the alcoholic male star who aids in her rise, writer/director Cooper had to do something to change it up a bit. Thankfully that change came in the form of the leading lady, Lady Gaga's Ally, whose attitude, independence, and autonomy make for a refreshing change from previous versions of A Star Is Born. Spoilers ahead.

Cooper plays Jackson Maine, a drying-up country-rock star whose hearing is fading. His alcoholism is accelerating his career into a further washed-up state. But one night on a post-show bender, he wanders into a drag bar where Ally, all dressed up in black hair paint, skinny eyebrows made of electrical tape, and a negligé sings "La Vie En Rose," Cabaret-style. It would be easy to mark this moment as one where something in Jackson's head clicks on — where he's found a "manic pixie dream girl" who's going to save his soul. But Ally is no manic pixie, nor is she here to save Jackson.

Ally's individuality is obvious from the start, and likely not what Jackson expected. Not quirky nor free-spirited, Ally suffers from crushing self-doubt and radiates much more of a street-savvy vibe than the glowing innocents of Stars past. When Jackson is accosted by a so-called fan at another bar, it's Ally who throws the first punch. When Jackson invites her to a show the next morning, she rejects his advances, citing her need to get to work. She bosses around her father and his colleagues about picking up after themselves. Ally rules their roost. "Who's going to take care of your hand?" Jackson asks after the punch leaves her swollen. "Me," Ally says, "I'll take care of it." The very idea that Ally doesn't need taking care of isn't something that enters Jackson's mind.

So as their relationship progresses, along with Ally's career, conflict comes as a result of Ally being — and further growing into — her own person, and Jackson's stagnation in his own identity. He thinks that in helping someone else, he'll save himself in return. Jackson's biggest mistake, however, is thinking that Ally won't make it on her own, or that she can't. Indeed, it is Jackson who helps launch her career by bringing her up on stage to sing in front of thousands. But Ally never actively asks for help, nor does she use Jackson's fame as a mere stepping stool to another level. She loves him, plain and simple.

As Ally transforms into a pop star resembling Lady Gaga herself in music and image, it's clearly written on Jackson's face that this pop persona isn't what he envisioned for his muse. Jackson tries to subtly suggest that her new look and act isn't who she truly is, but he's wrong, not that he ever really asked her. "I failed you," he laments, as if her shockingly bright hair color and pop music is something to be ashamed of.

When Jackson's best friend Noodles (Dave Chapelle) suggests that Ally might be Jackson's "way out," as if it's Ally's responsibility to bring him out of his downward spiral, the implication is that because he can't do it on his own, he expects that she can't either.

But Ally is no wilting flower, eager to please her idol, which does mark a change from previous iterations of the story. The 1976 version starring Kris Kristofferson as rock star John Norman Howard and Barbra Streisand as aspiring singer Esther Hoffman may have the benefit of having come from the feminist '70s, but Esther is still a bit pathetic. Most cringe-worthy is her attempt at convincing him that marriage is a good idea in some kind of reverse proposal, his reluctance reflecting typical playboy behavior. His cheating adds an additional component to the "suffering wife" script that the other movies manage to avoid. And Judy Garlands' 1954 take on the character, while luminous, suffers from a bubbling nervousness energy as she frets over her husband's well-being.

That's not to say that this new version avoids pitfalls entirely. It is frustrating that Ally never really realizes that she's enough on her own, and that Jackson's validation of her career isn't necessary. That she decides to give up a portion of her tour to take care of him, just as her star is rising, makes made me internally scream. Additionally, the production's backstory of Cooper wanting Lady Gaga to go makeup-free brings up some problematic issues having to do with makeup and female authenticity. Also frustrating is how, in 2018, here we are with a single female character in a cast full of men. Though Ally's circle of friends includes many drag queens, her relative isolation as a woman feels pretty lonely.

But despite those quibbles, this A Star Is Born is both electric and heart-wrenching, managing to be a restorative reboot on an often-told tale. "12 notes and the octave repeats," Jackson's brother Bobby (Sam Elliot) tells Ally. "It's the same story over and over." This time, thankfully, the star herself has a bit of an edge.