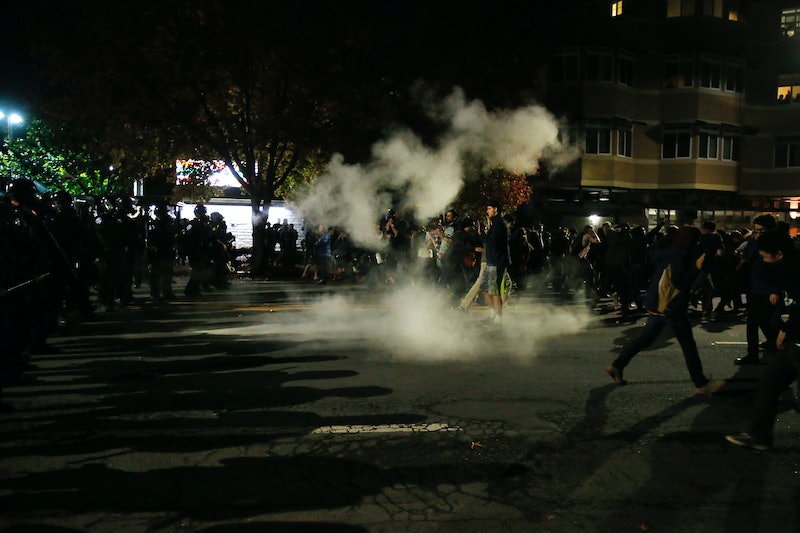 On Wednesday night, vandalism and violence erupted during protests at the University of California, Berkeley over a speech scheduled to be given by Milo Yiannopolous. The Trump-supporting Breitbart editor is known for making inflammatory statements about race, gender, and sexuality (among other topics) and for fighting against "political correctness." Amid the chaos, the university decided to cancel Yiannopolous' appearance.

Yiannopolous has made his name, and his money, through his ability to use his words to irritate people in a big way, so he should accept the consequences of many people being angry at him and not wanting to hear those words. Yiannopolous has the right to speak without being censored by the government, but that also means that people have the right to oppose his speaking appearances.

While I can't say I shed a tear for Yiannopolous specifically, I do feel bad for U.C. Berkeley. Setting fires, breaking windows, and other property damage hurt the institution of higher learning. With Berkeley's long history of both progressive politics and commitment to free speech, the school should not be punished for continuing to adhere to these values. Allowing their College Republicans chapter to invite a speaker they choose should not be an invitation for vandalism and violence.

But the people for whom I feel the most sympathy are those who oppose Yiannopolous, but refrain from doing so by violence.

The U.C. Berkeley protests manifested into something destructive — and it turned off people, regardless of how they feel about Yiannopolous. Once you start setting fires and destroying property, you run the very legitimate risk of alienating those who agree with Yiannopolous , but also those who oppose his views and his whole shtick but don't believe violence is ever acceptable.

Moreover, I worry that these protests may encourage those who do agree with Yiannopolous to become more brutal. I fear that displays like the one at U.C. Berkeley give them an opening to break the rules in response.

But this goes farther than that. Violent movements are more difficult to spread than nonviolent ones. Most of the American left is not the black bloc — the radical anti-fascist anarchist movement that embraces violent tactics. But when joining a protest means having to throw yourself in with the people who start riots in U.C. Berkeley as well as in Washington, D.C., many of the people who might become allies in the fight are likely to hold back from joining it.

Nonviolent protests can have effect. In the case of Yiannopolous, his recent book deal from Simon and Schuster has caused the publisher to receive boycotts from authors, consumers, and critics, which could cause other companies to think twice before associating themselves with him.

For movements like this to have an effect, they have to grow. And the quickest way to halt their growth is for everyone who learns about Yiannopolous appearing at U.C. Berkeley to see burning streets and broken windows and think, "not me."