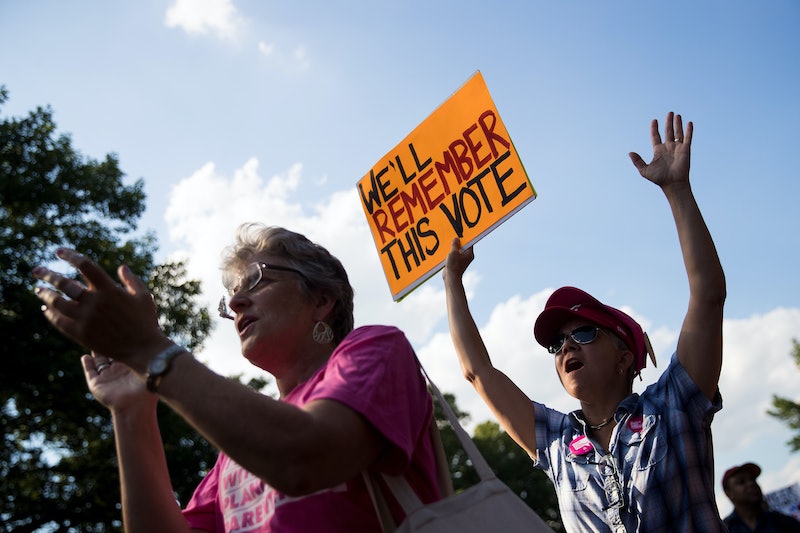 On Friday morning Sens. Lisa Murkowski, Susan Collins, and John McCain voted "no" on the latest Republican repeal effort, effectively saving Obamacare. But among those responsible for the huge win are the thousands of people who phoned, called, and protested outside lawmakers' offices and homes. And as one of the leading organizers in the fight to save Obamacare, the Resistance helped kill Trumpcare.

Part of that effort is thanks to Wendy Garcia, a mom and former radio host in Surprise, Arizona. Never too outspoken about her politics, Garcia's outlook changed after Donald Trump's election. She founded Indivisible Surprise, and joined with hundreds of her fellow Arizonans in trying to get their Republican senators — including John McCain — to fight back against Trump. Their biggest goal was saving the Affordable Care Act. On Friday, McCain voted against it.

"We didn't see that coming," Garcia tells Bustle about her senator's vote. "We had hoped for it. We had communicated it at length, especially considering his own condition. He was our first target."

After six months of the Trump administration, the biggest legislative goal of his presidency collapsed, without Republicans able to make good on their seven-year promise to undo Obama's signature legislative achievement. For activists who have fought against the bill for months, it is day of victory, one that feels even more powerful for how surprising it is.

"I think people are tired, proud, and fired up, in equal measure," Anna Galland, executive director of MoveOn.org, a progressive grassroots organizing site, tells Bustle. "We know that last night was significant. We also know it's not over. The zombie of Trumpcare could still rise, so we are clear-eyed about that, but last night was a real and important win for the grassroots activists around the country who've been coming out for literally months, spending hours of their lives trying to stop this attack on their health care."

MoveOn started back in the '90s, to oppose the impeachment of President Bill Clinton. It came to real prominence fighting the Iraq War in the Bush years. But Galland says that even those fights were small compared to the level of engagement she saw coming from activists fighting repeal of the Affordable Care Act. She is still amazed at how successful they have been.

"The Republican Party controls both houses of Congress and the presidency, and they've run for seven years on a platform of repealing Obamacare," Galland says. "We had lobbyists and others telling us that they had 100 percent certainty that the Republican Party was going to repeal Obamacare within the first X days of Trump taking office."

And she thinks that it was actions of those individual citizens, fighting for their health care, that turned the tide on the bill:

The first "resistance recess" in February. We had a million visitors to our hub-site within a week. And I just remember those electric town halls filled with activists, besieging their members of Congress, saying, "What are you thinking? Don't you dare take away my health care!" That really set the tone and showed that this was going to be a long hard fight.

Beyond MoveOn, the fight against Trumpcare mobilized activists from disparate groups like ADAPT — who organized disabled activists fighting Medicaid cuts — and Planned Parenthood. According to a representative for Planned Parenthood, volunteers working with the organization led 2,200 events throughout the country opposing the Republican bill. Planned Parenthood supporters were responsible for 200,000 phone calls to Congressional offices, including 13,000 this Tuesday alone.

For the organizers of this fight, the power they now hold is making them only more hopeful. Ezra Levin, who is now co-director of Indivisible's national staff with his wife, Leah Greenberg, tells Bustle that he's still shocked at how much the organization has grown — when he and his friends wrote the Indivisible Guide, they thought some activists might read it, but now it's changed his life and thousands of others, with literally thousands of local groups now fighting back constantly.

"It is so clear to everybody working on Indivisible at the national level that this is something that's being led at the local level, that the force of this movement is that individuals are taking ownership of it, making decisions, building up the groups themselves," says Levin.

He sees the impact of local groups on their own representatives — such as activists in Maine, Arizona, and Alaska — that pushed the Senators that opposed the bill into doing so. "And without that, we'd be nothing. We'd be a Google doc. This is a movement of thousands of groups, not just a handful of people in D.C. who are doing things. It wouldn't work that way."

For those individuals, the thrill of victory, and of getting involved directly, has changed lives. Garcia took the fight over the Affordable Care Act personally — she herself receives Medicaid for a disability, and has children who were uninsured at one point when her family's income was just too high to qualify for government assistance. Her first daughter died as an infant from a heart condition. And she remembers, in the time before the Affordable Care Act receiving a bill for $998,000 in afterwards.

Ater leading Indivisible Surprise for months, Garcia is considering running for office herself. But in the mean time, she plans to keep fighting as a citizen.

"Those members of Congress, they work for me," says Garcia. "And if they act in a way that isn't in accordance then this is the power we have. If we don't use it, we're letting the kids down. Did I have an inkling that we could save the Affordable Care Act? It's what we have. The people power — it's all we have, and win, lose or draw, we have to fight."