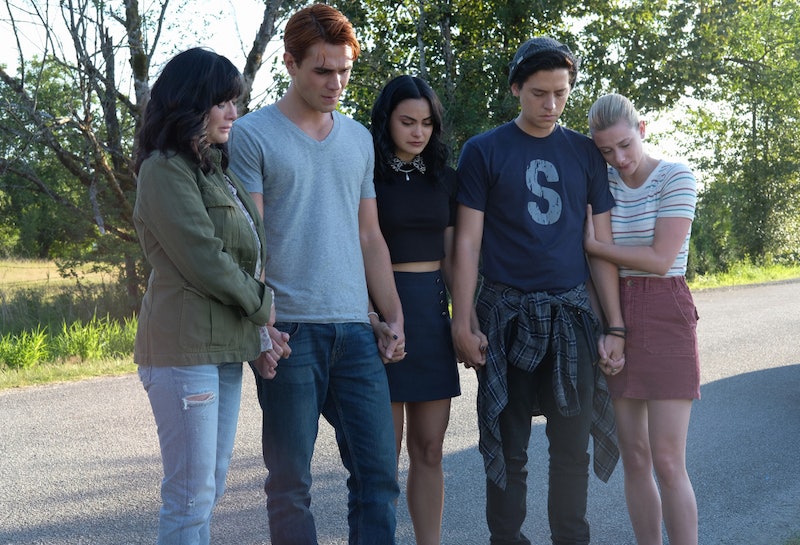 Spoilers ahead for the Riverdale Season 4 premiere. There's a scene in the Riverdale Season 4 premiere in which the town's teenagers sit around in a circle telling their favorite stories about Fred Andrews, who has just been killed in a hit and run. Some of their anecdotes are sweet, others are sad, but throughout all of them, the grief is palpable — not just because the characters are mourning Fred, but because the show's actors are also mourning Luke Perry, who died unexpectedly in March.

Riverdale's third season was still on the air when Perry suffered a fatal stroke, and other than a dedication to the actor in one of the episodes following his death, showrunner Roberto Aguirre-Sacasa wanted to wait to address his absence in the show until they could do it properly. "When Luke passed, we very quickly made the decision that we weren't going to address it [in Season 3]," he told TVLine earlier this month. "We didn't want to rush it. We didn't want to sandwich it in between all the other plotlines."

The result is a somber Season 4 premiere that functions primarily as a bottle episode commemorating Perry's legacy, which was understandably difficult for the cast to film, given how close they'd grown to the late actor. "After [Perry] passed, his family called and asked if they could have his private memorial at my house, and I was like, 'Absolutely. But why?'" Skeet Ulrich, who plays Jughead's dad FP Jones, told Bustle at New York Comic Con. "And I didn't realize it, but apparently Luke did not like to go many places, but he always wanted to come to my house. And we lived very close together. I'd run into him at the local hardware store more than I would on set."

This made being the one to tell Mary (Molly Ringwald) and Archie (KJ Apa) that Fred had died as hard for Ulrich as it was his character. "I don't think I've ever had that raw of an experience that was filmed before," he said of the scene. "Literally almost impossible to utter lines — unexpectedly, to be honest."

But just as Jughead, Archie, Betty, Veronica, Reggie, and Kevin found some catharsis in sharing their favorite stories about Fred, so did the Riverdale cast with Perry. "I'll never forget one time Luke called me in between Season 1 and Season 2, and he said, 'I really need to talk to you about my character,'" Aguirre-Sacasa recalled, saying he assumed Perry was upset about how his character was being written. "He said, 'You know, I've been thinking about Fred a lot, and I think Fred should have more dirty dishes in the sink.' And I said, 'What do you mean?' And he's like, 'I mean, he's a bachelor. Archie's a bachelor. No one's doing dishes in the house.'"

According to Aguirre-Sacasa, Perry also had strong feelings about the number of flannel shirts Fred owned — he said his character had enough already and didn't need any more. "And then the last thing he said was, 'I want to be hammering more stuff,'" Aguirre-Sacasa added, smiling at the memory. "And it's funny because in the premiere, we flash back to that one scene from Season 1 where he's hammering something."

In addition to Riverdale's regular cast, the Season 4 premiere also features a cameo from Perry's former Beverly Hills, 90210 co-star and longtime friend Shannen Doherty, who Perry had been trying to get on the show for quite some time. She plays a woman with car trouble who Fred stopped to help on his way back to Riverdale — a decision which results in his hit and run. Doherty's character, Aguirre-Sacasa explains, is there "mourning Fred and honoring Fred, but of course because it's Shannen, it becomes about honoring Luke and mourning Luke."

Ultimately, Ringwald said, the whole episode was "just like a raw nerve. I mean, I pretty much cried from beginning to end."

But as emotional as it was to film, the premiere succeeds in what it set out to do: honoring Perry's legacy. "Fred Andrews will always be a part of Riverdale," Archie says during his father's funeral. So will Luke Perry.

More like this
What Working At Marvel Is Really Like, According To A 'Ms. Marvel' Co-Creator
By Gretchen Smail
Zooey Deschanel Can't Be Anyone But Herself
By Samantha Leach
Hannah Khalique-Brown Has Her Sights Set On 'Strictly'
By Frances Stewart
Daryl McCormack On His Unusual First Audition With Emma Thompson
By Olivia-Anne Cleary
Get Even More From Bustle — Sign Up For The Newsletter