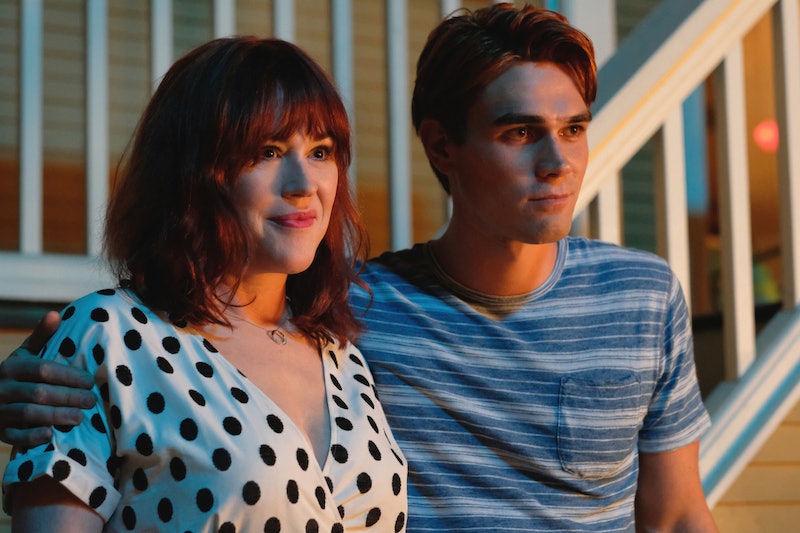 When Riverdale returns for Season 4, Luke Perry's death will finally be addressed — and that means losing Fred Andrews, too. At New York Comic Con on Sunday, Oct. 6, Molly Ringwald revealed Fred's death on Riverdale will be felt all season. And the repercussions will be especially felt in Archie's relationship with his mother, Mary, played by Ringwald.

"They're grieving together," Ringwald told Bustle during a roundtable interview at NYCC on Sunday, of how Archie and Mary will move forward in Season 4. And that grief won't be contained in one episode. "I think it's really powerful to get to see somebody — for young kids to watch the show and see somebody lose somebody close to them that they love, and still go on," she added, "but have those moments where you remember the person." In a separate roundtable interview with Bustle showrunner Roberto Aguirre-Sacasa echoed this statement, saying, "For some people like Mary and Archie, they're living with that loss every day."

In March, Luke Perry unexpectedly died following a massive stroke, and since Riverdale was still filming at that time, production briefly came to a halt. However, the writers opted not to address Perry's death in Season 3. Now, Fred's death will take center stage in the Season 4 premiere, which is set to air on Wednesday, Oct. 9, but his absence will be felt long after the episode airs.

"The thing about grief is it's not linear, you know?" Ringwald said in a separate interview with Entertainment Tonight. "It's not just like you get over it. Life goes on. …There's still moments where Archie and Mary really miss him and I think it's very important for people to see that."

Given the close relationship between Archie and Fred, it seems Archie is going to be a bit lost without his dad. And, as seen in a new trailer released at Comic Con, Fred's death is going to be a huge blow for everyone in Riverdale, not just Archie.

That said, Ringwald hinted that Fred's death might send Archie down a dangerous path. "He gets a little lost," she said, during her roundtable interview with Bustle. "[He's] wanting to do good, but not necessarily going about it the right way... Mary has had to sort of step in and be the moral compass, sort of fill Fred's shoes."

In previous seasons, Ringwald's character, Mary Andrews, has come in and out of the storyline. As Fred's ex who doesn't actually live in Riverdale, she popped in from time to time to visit her son. But now that she's the only parent Archie has left, it seems that Mary will be a more significant presence this season.

Back in May, Riverdale show runner Roberto Aguirre-Sacasa told TVLine that although Ringwald's return was always planned for Season 4, she may have a larger role in the show now in the face of Fred's death.

“[We’ve told her], ‘You’re welcome back anytime, as often as you want and as much as you want,'” Aguirre-Sacasa said. “We actually already had her scheduled to come back to Riverdale to visit Archie and Fred. When the tragedy happened, she said, ‘If you need me to stay, I’ll stay.’ And I said, 'We’d love you to stay’… We’ve talked about Molly having a bigger presence next year to help her son.”

Although seven months have passed since Perry's death, saying goodbye to Fred Andrews on Riverdale will definitely make for an emotional episode when the show returns on Wednesday, Oct. 9. But fortunately, it sounds like Archie will have his mom to lean on.