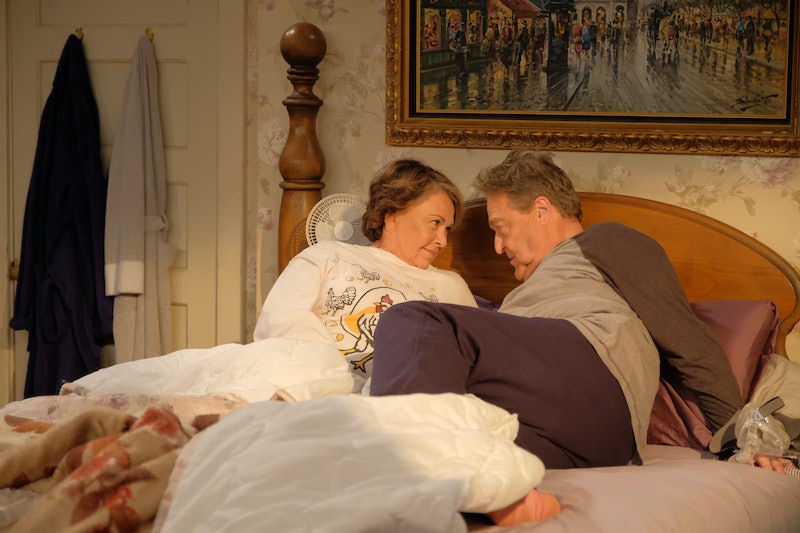 Roseanne was a groundbreaking effort in television production — for eight seasons, it showed the very real struggles and tribulations of an American working-class family. It was real, and it felt real. And then after Season 9, the original Roseanne ending happened, and Americans were left with emptiness where the show had been. Not just because Roseanne was over, but also because the way the ninth season ended just felt strange and disconnected to the rest of the series. Fortunately, the Roseanne revival beginning seeks to undo its final season, and the show is the better for it. Spoilers for the premiere ahead.

The series finale of Roseanne threw off anything good that had happened to the Conner family in prior episodes, most importantly that Dan (John Goodman), Roseanne’s husband, had not cheated on her, but died instead. He had a heart attack and never recovered. They also never won the lottery; Darlene was with Mark; Becky was with David; and Jackie was gay. Everything was fictionalized because Roseanne was writing a novel, and she needed to take liberties with her life in order to cope with Dan’s death and also to make a better story.

“My writing’s really what got me through the last year after Dan died,” Roseanne says in a voiceover after the big reveal. “I mean, at first I felt so betrayed as if he had left me for another woman. When you’re a blue-collar woman and your husband dies, it takes away your whole sense of security. So, I began writing about having all the money in the world and I imagined myself going to spas and swanky New York parties just like the people on TV, where nobody has any real problems and everything’s solved within 30 minutes.” Viewers had problems with this shift in canon, and the Roseanne revival is combatting that by, well, ignoring most of it.

The very first scene of the revival opens with Roseanne and Dan in bed, Dan clad in a sleep apnea mask. She wakes up and wakes Dan up, who exclaims, “I’m sleeping! Why does everybody always think I’m dead?” “You looked happy,” Roseanne spars back. “I thought maybe you moved on.” Of his return to Roseanne, Goodman told critics at the 2018 Television Critics Association Winter Press Tour that he knew he’d be back, and he didn’t care how. "I didn't really care," he said, according to E!. "I thought it was a clever way to do it, handle it and get it out of the way."

At the end of Roseanne’s original run, the Conners won the lottery (well, supposedly) and were fabulously wealthy. Not so in the revival. They’re just regular working-class people again. In the first episode, Roseanne and Dan go through their prescriptions, figuring out what they can pay for and what they have to leave behind (these are not problems a rich person would have). They live in the same house as before, and they laugh at Darlene’s daughter when she asks for money. “You could have just said we were poor,” she says. It feels remarkably like the old days in the Conner house, before Roseanne’s writing pushed it into straight-up fiction.

After the first episode, the Roseanne revival is off to the races, tackling both familial issues and social issues with aplomb — that’s the biggest similarity between the old and new series. Some things feel heavy-handed (the whole Jackie versus Roseanne political plot in the first episode is uncomfortable, probably because it’s too real), but seeing Roseanne and, most importantly, Dan on television again is like getting a warm hug. The Conner children are older, but they’re all single (partners would probably throw off this familial dynamic), and they, with the exception of Jerry, who works on a fishing boat in Alaska, all pop in and out with their own children.

The Roseanne reboot has erased the ending that threw off the momentum of the original — a correction that's late but still welcomed.