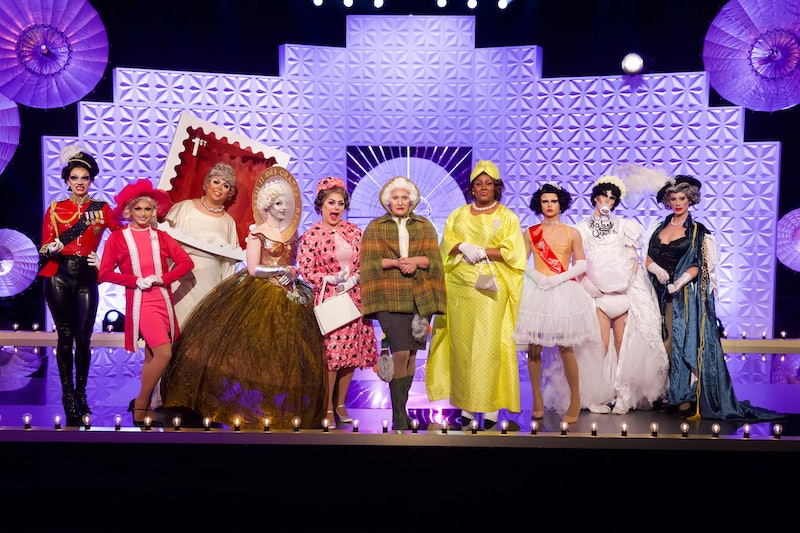 RuPaul's Drag Race has finally kicked off its UK takeover, and start your engines, because the groundbreaking series has only just begun. Yes, the first ever series of Drag Race UK is now underway over on BBC Three, and viewers were introduced to a lineup of queens who represent the very best of the British drag scene. However, a lot of painstaking preparation goes into the fabulous runway looks we so casually admire — much of which takes place before filming has even begun. So, what outfits did the queens prepare for Drag Race UK?

Now, details surrounding how the cast get ready for a new series are (for the most part) kept under-wraps. I have reached out to a representative of the BBC for more insight into the process, and will update with any new information once it becomes available.

However, the cast of each new season are reportedly briefed with a list of potential runway themes, which suggests competing queens do have a chance to assemble their iconic lewks. According to Teen Vogue, the queens receive an "extensive" list of possible themes and outfits to prepare for the various challenges and main-stage presentations. The rumoured list is reportedly pretty vague, and may feature themes that end up being scrapped from the series all together — despite this uncertainty, its nice to have a heads up, and this could explain why the Drag Race queens are always so on point.

Interest in the queens planned outfits arose shortly after the first Drag Race UK elimination, when contestant Vinegar Strokes revealed her original London-themed runway look on social media. Vinegar explained that her decision to switch to a River Thames-inspired number was due to licensing issues, and speaking on Instagram, she explained, "Funny story! THIS WAS WHAT I WAS PLANNING ON WEARING FOR MY HOMETOWN QUEEN RUNWAY!!!!! What’s more London then our glorious TFL Underground line. But due to licensing I wasn’t allowed to wear it, hence the creation of THAMES, THAMES CROSS THE BOARD!!"

Vinegar went on to explain that her ditched Underground outfit was inspired by her daily commute on the Victoria Line, and although Drag Race viewers missed out on this original concept, Miss Strokes went on to share snaps of the garment for the world to see.

As reported by the Metro, Vinegar Strokes recently found herself in the bottom two alongside fellow Drag Race UK queen, Gothy Kendall. Following an epic lip-sync battle to Dua Lipa's "New Rules" Vinegar lived to fight another day, which sadly meant that it was Gothy's turn to sashay away. Despite struggling with confidence issues throughout the various challenges, Gothy has managed to look on the bright-side, and has since described the reaction to her Drag Race stint as "amazing." During an interview with the Metro, she revealed, "actually watching the episode, you realise there’s nothing to worry about. I showed myself and my personality to the best of my ability, and the reaction so far has been amazing."