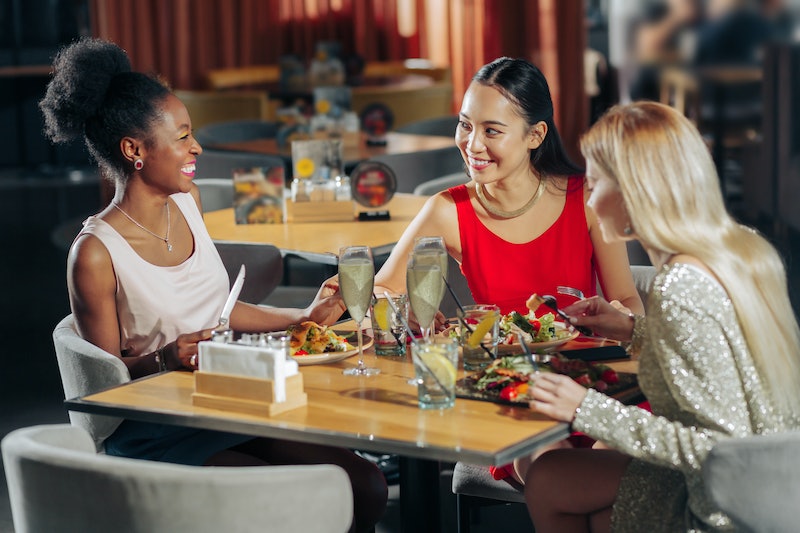 On September 28, the first new moon of the fall season will take its place in the night sky. With the autumn equinox so fresh in our awareness, this new moon will come with transitional vibes galore. While it won't be much to look at — it's a new moon, after all — it will come with some spectacular effects to be felt within. You'll want to know how the September new moon will affect your social life, as the invisible moon will have a strong influence on the way we relate to and interact with each other.

The first new moon of fall is in the house of Libra, which means that personal relationships are in the spotlight. Libra energy wants to balance out relationships that are uneven, and it also wants to balance out your own personal dynamic if it's not level. Because of this, depending on your sign, you might be inspired to go out and live it up on the town, or stay home and curl up on the couch, alone.

Not all signs respond to new moon Libra energy in the same way, and depending on how sensitive your sign is to Libra's judicial essence, you're in for big change in your social life. To shine some light on how we'll all react to this astronomical and astrological event, Bustle talked to astrologers Lisa Stardust and Linda Furiate. Together, they have gathered predictions for how each sign's social life will be affected.

There's going to some tension in your social life, according to Furiate. Whether that means you're not seeing eye to eye with a partner or friend, or are find yourself in the middle of a tiff, you can expect some bumps. Furiate suggests "letting go of the reigns to allow someone else to decide on what to do for fun," as adding too much of your opinion might only make things more bumpy.

According to Furiate, your social life is going to be on pause during this time. "You might feel under the weather during this new moon or be expected to work overtime," Furiate predicts, so when you have time off work, you should be focusing on your health and not your social life. "Hot yoga or other body work may provide Taurus with all they need to feel connected to the world," Furiate says.

Furiate tells Bustle that during this time your phone will be lighting up. People from all different parts of your life are going to want to hang out with you, but if you're not in a relationship, Furiate suggests leaving some room for meeting new people too, as this could be the right time to meet someone special. Love is in the air, if you make time for it.

According to Furiate, "you may be more in the mood to stay close to home with the ones they love," so don't push yourself to go out if it doesn't sound ideal. "A home cooked meal and binge-watching Netflix may feel more appealing than a deafening crowd and heavy traffic," Furiate tells Bustle, so give yourself permission to be out of commission.

Are you feeling like the center of attention? It's not in your head. According to Stardust, "your presence is in high demand," so lean into the opportunities that arise and be present.

Feeling nostalgic? According to Stardust, "bonding with childhood friends will be the focal point of your social sphere now," so get the old gang together and have an epic catch up. If you're not living in the same place as your friends, set up a group video call.

According to Stardust, you're going to have a serious desire to lean into your inner social butterfly. "Enjoy the freedom to connect with others," she suggests, as this social inspiration might not stick with you for long. Aka, go out and mingle while you have the energy to, it might lead to things that last longer than your interest in going out.

While your friends are going out, enjoying the fall weather and interested in festivities, Stardust predicts that you're going to want to stay home. It's not that you're a party pooper, it's just because you actually need to relax and recoup after a high intensity end-of-summer.

You're going to be out and about during this time, and while it will feel good to spend a lot of time with friends, Stardust warns not to overdo it. You'll need to maintain a bit of energy for other aspects of your life, you can't really afford to be operating on fumes during this time.

You're going to be in work mode, but you'll still feel social. "Networking with work friends and colleagues will help you reach your next professional destination," according to Stardust, so put some energy into your co-workers. Having friends at work will also make being at work way more enjoyable.

During this time, Stardust predicts that you'll want to be social, but not in a typical sense. Instead of parties and nightlife, you'll be "inclined to hit a yoga class with your crew and bond there" as this will feel like the most meaningful connection at this time. This is also a great way to make friends, if you don't already know anyone interested in wellness classes.

According to Stardust, now is the time to lean in to your spiritual side. "Create magic with your coven," Stardust suggests. Whether that's getting the crew together to do tarot readings, doing a group art project or having an intentions reading ceremony, you'll want to hang out with like-minded thinkers during this time.