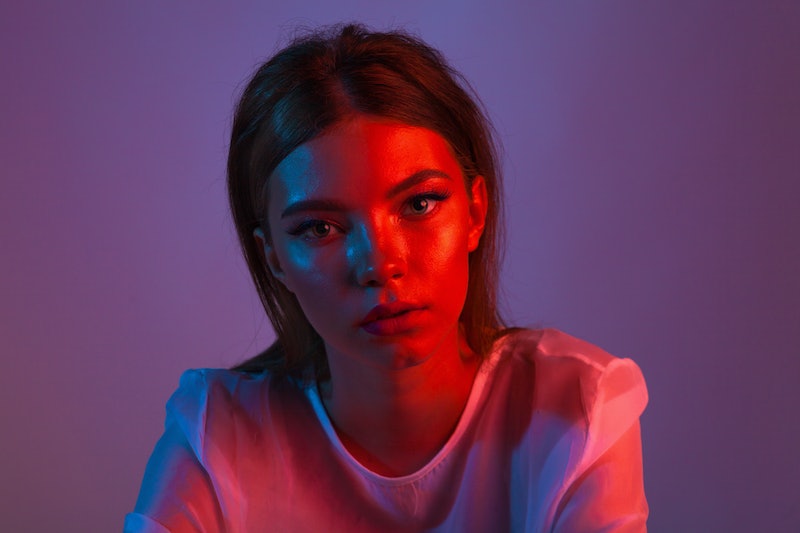 Summer is officially over on Sept. 23, and less than a week later we'll be graced with the dark night of the first new moon cycle since the autumnal equinox. The September 2019 new moon will reach its peak on Sept. 28 in the diplomatic and harmony-lovin' sign of Libra — where the sun is also currently residing (that means it's Libra season, woot woot). This new moon is going to feel romantic, exciting, flexible, and social, so we can look forward to a reprieve after September's last major luminary, the full moon in Pisces, which felt quite heavy, emotional, and confusing.

The new moon is in Libra, and as a cardinal air sign, Libra energy is creative and mentally focused. Libra is perhaps the most partnerships-oriented sign of the whole zodiac, as it's constantly seeking out balance and diplomacy. This is partially due to the lovely Venus being its ruling planet, making love, romance, beauty, and aesthetics important parts of a Libran focus — and a major thematic influence over September's new moon energy. Planet Venus will also be sharing a sign with this new moon (meaning it's super cozy in its home sign of Libra!), which will bring an extra romantic, flirty, and fun energy to the luminary.

Bustle spoke with astrologer Lisa Stardust, who weighed in on what this luminary has in store for all of us mortals. "The Libra New Moon will bring us major insight into how we want to partner — both romantically, professionally, and with friends," shares Stardust with Bustle. "We will be making decisions about relationships and how we commit under this luminary."

If you want to know how the September 2019 new moon will affect each zodiac sign, that's great, because we've got the answers! Check out what's in store for your sun sign under the sweet, fun, and romantic energy of the upcoming dark moon.

Romance is on the brain for many of us under this new moon, Aries, so don't be surprised if you feel like the living embodiment of the heart-eyes emoji. "Love is in the forefront of your mind," says Stardust. But look out: With both the moon and sun opposite your sign during this luminary, you might be feeling the intrigue on hyper-drive, making you slightly irrational. "Think carefully before you lean into a commitment," adds Stardust.

With both the moon and your ruling planet Venus in social, diplomatic Libra, you'll be feeling much more social than you have been lately — and you'll find that this manifests itself at work, of all places. "Acquaint yourself with your co-workers now," advises Stardust. "You will bond over happy hour." You may find that your colleagues offer more significant connections for you than you previously thought, so open yourself up to their company.

All the intellectually-stimulating energy of Libra season leaves a fellow air sign like you feeling buoyant, fresh, and full of ideas under this new moon. "A new creative project will leave you feeling close with intellectuals," says Stardust to Bustle. You're in the process of developing your own tribe of creative, like-minded individuals, and the fresh-start energy of the new moon will boost up a new and exciting endeavor.

Your family unit — whatever that looks like for you — hasn't been the hearth-y haven that you'd like it to be. But as we enter the season of the harvest and begin a fresh lunar cycle with this new moon, it's time to strengthen the bonds that have come a bit loose over the past months. "Reunite with your family to become closer," advises Stardust. You're a creature of comfort, so work on creating your social support system.

You've been on your hot girl summer grind and your career life has been booming with opportunities, ideas, and a fully hectic schedule. Kick off autumn's first lunar cycle with a break from the crazy train. "Take a road trip with friends to alleviate work stresses," advises Stardust. A little time outside your usual routine with the people who get you for you will shift your perspective and leave you feeling refreshed.

As this new moon shares a sign with Venus, planet of money and luxury, you'll notice a fresh take on a money sitch that will feel like a new beginning. "A new financial investment will leave you feeling happy," shares Stardust with Bustle. You've made some money moves over the past lunar cycle, and with this one, a glittering door will finally swing open, revealing to you all that may soon come to fruition. Feel hopeful.

This is your new moon, Libra, and will all the planetary energy currently focused in your home sign, it's no surprise that the stars are calling on you to hone in on one important area of your life: you. "Spend time cultivating the relationship you have with yourself," says Stardust. "After all, it’s the most important one." It's easy to constantly distract yourself with others, but it's time to cut through the static and hold space for the inner you with a clear connection.

This new moon is a manifesting moon for you, Scorpio. Retreat from the distractions of your daily grind in order to focus on your deepest desires. What do you hope will materialize in your life over the coming moon cycle? The coming season? The coming year? "Take time to mediate on what you want to create with others," advises Stardust. Your ability to create reality is strong, so don't sleep on your super powers.

Social butterfly that you are, you've spent a lot of time through the past summer making connections among friends, colleagues, and your community — which is great! But as we approach this new moon and embark on the season of the harvest, you'll want to start separating the wheat from the shaft, so to speak. "It’s time to evaluate your friendships and make decisions about who you want to keep in your life," explains Stardust.

Career highlights are on the horizon, and the ever-balanced Libra new moon is offering you a glimpse at the excitement and collaborative energy that's soon to come. "A new job may bring you all the glitz and glamour you crave now," predicts Stardust. Glam yourself up and prepare your baddie self for the spotlight. You've been working toward a change of energy work-wise, and this luminary brings a sense of having moved over another hurdle and come a step closer.

With the new moon in fellow air sign Libra, you'll find the many thoughts swirling through your head traveling straight to your tongue — which, yes, makes you more social, but also brings concerns. "Talk is cheap," warns Stardust, "so make sure your actions and words match up." It might be easier than usual to get carried away and say too much given the unpredictable Uranus influence over this moon, so call on Libra's sense of balance to tame your tongue.

Money struggles have plagued you through the past season, but with this new moon and Venus' glittering, luxurious influence, you'll feel inspired to rethink the way you deal with your finances. "It’s time to start a new relationship with money," advises Stardust. "Create a new financial plan for yourself." The fresh-start energy of the new moon brings a burst of both energy and clarity of mind that will help you get the ball rolling.