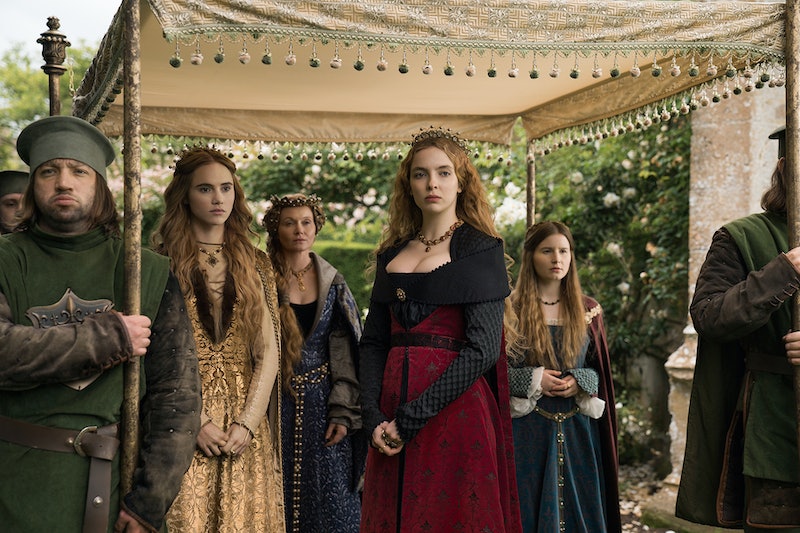 While both Starz series are adapted from Phillipa Gregory's novel series and have similar characters including the Dowager Queen as well as Elizabeth and Cecily of York, who appeared towards the end of The White Queen, there is a new cast and the series takes place later.

"It’s a continuation of a story that was begun in The White Queen," says Frost. "We finally find out the outcome of that narrative about the two boys in the tower, which is one of the biggest unsolved mysteries in British history, so I hope that the world and the narrative will be familiar for the audience."

The tone of the show is different because of the history in this period, as well. "I think they’re in more unstable times," says Collins-Levy. "It’s a very unstable reign, Henry’s reign, because his claim to the throne is so thin that the stakes are maybe a bit higher in this series."

The team worked together to make sure that their vision of the world was coherent. "I think, therefore, visually, it is a very different experience to The White Queen," says Frost. "I think it is, I mean, I couldn’t be more thrilled with what it looks like. It is so sumptuous and glorious."

"I think it’s a different show tonally and texturally," she continues. "The White Queen combined three of Philippa’s novels, and I think that it means that the way that the stories are told in The White Queen is much more 'event,' sort of." Collins-Levy agrees that this time, the story is a bit more self-contained. While they are sequels in an historical sense, and in terms of Gregory's novels, there is a different feel this time around.

"What I’ve been able to do with The White Princess," she says, "is really get into the psychology of the characters and the subtext, so it’s more 'period West Wing.' It’s about the politics, the power gains, and all of that. I hope it’s a deeper, richer experience."

"I just I think there’s a whole new energy," says Comer, who plays Elizabeth of York. "A whole new cast, which I think is exciting."

What else is different? "The battles, are much bigger," adds Collins-Levy, and "more horses," says Comer. While the cast is new, the transition between The White Queen and The White Princess sounds seamless. Fans of The White Queen will be put right back into the world they love, with even more royal intrigue and infighting than before.

More like this
Is The Serpent Queen Based On A True Story?
By Maxine Harrison
Nicola Coughlan Shared A Lady Whistledown Excerpt From ‘Bridgerton’ Season 3
By Grace Wehniainen, Alyssa Lapid and Sam Ramsden
A New 'And Just Like That' Table Read Pic Confirms A Key Character's Return
By Jack Irvin and Grace Wehniainen
You’ll Definitely Recognise Both Of Ty Tennant’s Parents
By Maxine Harrison
Get Even More From Bustle — Sign Up For The Newsletter