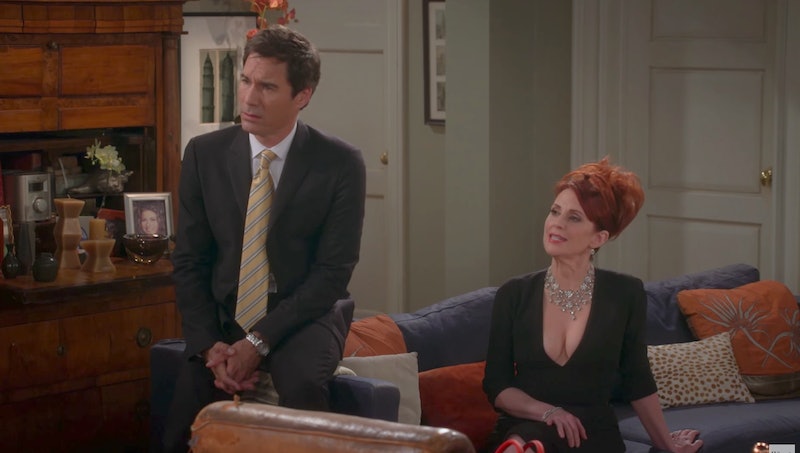 If you watched the show's finale, you might be wondering how the Will & Grace revival will tackle the time skip. After all, in the final episode of the original show, we jumped forward two years and then a further 18, leaving us in the year 2026. If you thought that they might ignore it entirely, think again. The Will & Grace writers have told E! News not to sweat it, because they've got us covered.

We got the first time jump following Will and Grace arguing. When Grace suffers from a spate of weird dreams in which she and her best friend become an old couple raising a child, she freaks out and begins to question how long she can stay living with Will for. Cue her moving out following her ex-husband’s proposal (something that’s great timing, since she’s pregnant with his child, but Leo isn’t aware of this fact). Cue Will getting seriously mad and cutting off contact.

The first time jump follows two years later when Karen and Jack pretty much take tips from The Parent Trap and lure Will and Grace to the same location, but, while it’s nice, it’s not enough to bridge the gap. We then get the bigger time leap when Will and Grace are brought back together by serendipity when they move their kids (Grace’s daughter Laila and Will’s son Ben) into their college dorm rooms.

Co-creators Max Mutchnick and David Kohan have told E! News that “They are very much living in that apartment in 2017 in the month of September, on the 28th of September at 9:00.” So, they can’t solve the time jump by simply leaping forward. Mutchnik conceded the difficulty of the challenge posed by the jump, saying:

“We've just come out of a story camp that lasted about three months. That's where we break and write all of the episodes that we will be filming in August or whenever we start. I will tell you that almost more than anything, more time went into figuring out how are we going to reintroduce the show and what were the rules going to be and how were we going to address that finale.”

And that's it. That's all the information we get. But if Grace gives birth in 2007, that would make Laila ten years old in the 2017 episodes. And, from the little snippets we’ve seen so far, there’s been no sign of Laila or Leo. So how are they going to solve it?

One possibility is how Pretty Little Liars recently (and some might say, cynically) solved their own time jump dilemma in the episode “Farewell, My Lovely.” The five years ahead clip that made no sense turned out to be… just a bad dream. Could the final 2006 Will &Grace episode be solved in the same way — with Grace chalking up her Will-free life as a mother to a chardonnay-induced nightmare? Given the fact that, according to Mutchnick, the writers puzzled over this for months, probably not.

If there’s a real world solution for the kid problem, it could be that Grace sent Laila away to boarding school and Leo is for whatever reason, abroad, possibly working for Doctors Without Borders. And then she makes up with Will for a little while before ending the show on another argument, explaining why they don't see each other until 2026. However, this still doesn’t explain where Will’s other half Vince or his son, Ben are.

Will’s partner was played by Bobby Cannavale, who has only gotten more famous since 2006, starring in Woody Allen movie Blue Jasmine, beloved indie movie Chef and superhero movie Ant-Man. Thus, it seems unlikely he’ll be back, especially since the relevant credit is missing from his IMDB profile. Would Ben be at boarding school too and would Vince have (briefly) left Will, only to reunite with him off-screen at the close so their still being together in 2026 would make sense?

Of course, there’s always the most radical option. Maybe we'll follow Will and Grace separately, with Jack and Karen working as go-betweens. This would work with the narrative of the time gap (since they’re not meant to be speaking during this time), but be an absolute drag for viewers. What are this pair if not their united chemistry?

All the possible solutions seem pretty unconvincing, and I can't deal with a show that doesn't celebrate Will and Grace's friendship with them both onscreen at the same time. But the writers puzzled over this for months, so we'll have to see what they came up with.