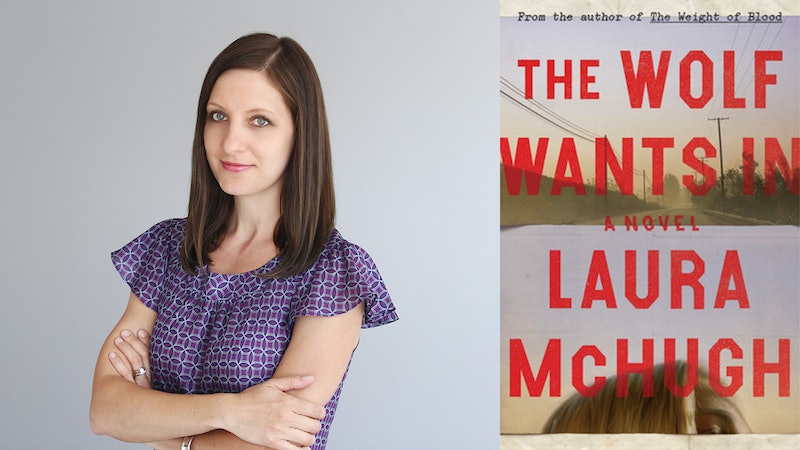 Laura McHugh, courtesy of the author
By Lauren Puckett
Aug. 7, 2019

When Laura McHugh writes, the mundane trappings of Midwest life — spinning whirligigs poking through flowerbeds; sweating slices of cream and chess pie; old folks converging upon the barbershop to chat about crops — become both sinister and familiar. McHugh, a Missourian herself, urges readers to remember one thing as they read her books: Every inch of this country is covered in rich, meaningful stories, but it won’t always offer you a happy ending.

In her third and most recent novel, The Wolf Wants In, the crime author, recently heralded as "the queen of the haunted heartland" by fellow acclaimed novelist Mindy Mejia, transports readers to middle America, where social worker Sadie Keller is fighting to keep her brother’s memory alive. Shane Keller died at a time and in a place where dying young seems inevitable: Blackwater, Kansas, one of several farming towns outside the Kansas City suburbs, has been ravaged by the opioid crisis. The sheriff’s department, already stretched thin with a murder investigation, can’t help Sadie track down the real cause of her brother’s death. But she knows he wasn’t an addict, and she refuses to believe his death was due to a heart attack.

Meanwhile, 18-year-old Henley Pettit is fighting her own family’s legacy. The Pettits are well-known in Blackwater for their less-than-savory activities — drugs, theft, "shady business ventures," and general delinquency. Henley’s made a promise to herself to get out of town, stat. But, in order to do so, she needs to keep her job as a housekeeper for the wealthy, well-connected Sullivan family. Even more importantly, she needs to stop focusing on her frequently absent mother.

"It’s an unknown place, dark and criminal. It’s so remote, and that sort of thing can add an ominous sense of foreboding."

Read any of McHugh’s books past the first few pages, and you’ll recognize similarities between the women she writes. Only so often do they adhere to the traditionally sticky, gendered label of "likable." Many are victims of deception or outright abuse. They’re products of their landscape: hardy, hardened, messy, devoted, smart, and often isolated.

"To some people, if they’re from bigger cities, [the Midwest] can seem exotic," McHugh says. "You know, with Ozark, and how it’s trending in pop culture, there’s an exoticism to it. It’s an unknown place, dark and criminal. It’s so remote, and that sort of thing can add an ominous sense of foreboding."

What she means is: You’ve seen women like this before, in shows like the aforementioned Netflix series Ozark and in the works of Gillian Flynn. McHugh is flattered, but not shocked by these comparisons. For one thing, she explains with a laugh, that’s how book marketing works. But, more importantly, Gone Girl and Ozark are two examples of the ways the Midwest — and the complicated women who live there — is trending in the zeitgeist. Her books fit neatly into that trend, yet they carve their own space.

McHugh grew up in tiny towns similar to the ones she writes about. Born in Iowa — the setting of her second book, Arrowood — she moved when she was around seven or eight years old to the Ozarks, near the Missouri-Arkansas border, which fans will recognize as the setting of her first novel, The Weight of Blood. She now lives in Columbia, Missouri, a mid-size college town not quite halfway between St. Louis and Kansas City. But the rural settings still speak to her when she sits down to write.

She grappled with the doubts many women fight when facing a career jump — that she was sacrificing time with her children, that her work would never be published, and that, ultimately, the time would be a waste.

Her books make the case that small towns are paradise for crime writers. Rural life is interconnected in such an intimate, twisted way that it makes crimes knottier and more interesting.

"I grew up very, very poor, and I grew up in that sort of environment where everyone was working class," she says. "The only jobs I was familiar with were factories or farming or fast food. And so I try to write that… I’m interested in the people who are struggling and trying to get by in these small towns."

She yearned to be a writer for most of her childhood, but earned degrees in computer and library science in addition to English, figuring a creative career was too great a financial risk. She was a casualty of layoffs at an insurance company while pregnant with her second child, so her husband convinced her to take a crack at a novel. She grappled with the doubts many women fight when facing a career jump — that she was sacrificing time with her children, that her work would never be published, and that, ultimately, the time would be a waste. She wrote anyway.

The result was The Weight of Blood, which went on to win an International Thriller Writers Award. Arrowood soon followed to similar acclaim, and The Wolf Wants In arrived this summer.

'The Wolf Wants In' by Laura McHugh

McHugh’s third novel is perhaps the first to grapple most closely with her own past. Like protagonist Sadie Keller, McHugh experienced the sudden, unexpected loss of her own brother in 2015. His death took place in a small town, and the police didn’t do an autopsy. McHugh and her siblings spent a year tracking down answers surrounding his death, but, unlike Sadie, McHugh came up with only fragments of the truth. To this day, the mystery remains unsolved.

"It was helpful to me, in a way, to write a mystery about that, that could be solved, and that could have answers," she says. “Because, in real life, we still don’t have answers.”

In the wrenching process of laying her childhood in fictionalized pieces on the page, McHugh has established herself as one of the preeminent crime fiction authors of the decade.

At home, her Midwestern town has rallied behind her. When Mejia referred to McHugh as "the queen of the haunted heartland," the women behind Plume, a Columbia gift shop, created a shirt for McHugh with the words in lacy cursive across the chest. A Columbia native myself, I discovered McHugh through my dentist, who raved about The Weight of Blood while checking my canines.

But it’s not only the Midwest to which McHugh swears allegiance. She refused to end our interview without discussing the rise of female crime fiction authors, and the ways they still struggle to have their books recognized, reviewed, and recommended in top-tier publications at the same rate as men. She feels a debt to her community of female authors, and though she’s excited to be interviewed, she seems more excited that a woman — any woman — is being interviewed in the first place. Stories like hers, and the inherently complex slice of American society they represent, deserve a place on bookshelves. She’s taken it upon herself to ensure they get there.