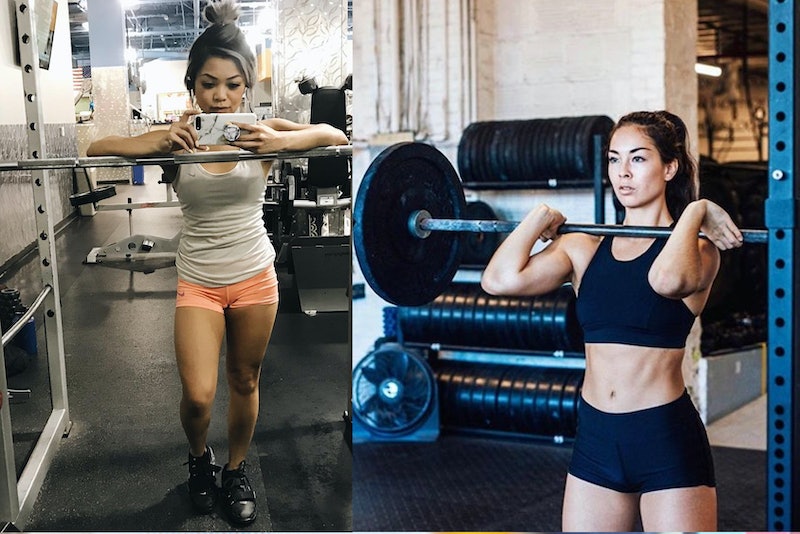 Weightlifting has traditionally been thought of as a male-dominated sport, but that's changed over the last decade. Thanks to the popularity of CrossFit and a growing number of fitness YouTubers and Instagrammers, lifting has gained traction as something versatile, fun, and accessible to people of all genders. Take a quick scroll through the fitness-minded corners of social media, and you’ll see more and more women lifting weights.

For Asian-American women, however, that shift is a few paces behind. As weightlifting gains more mainstream acceptance, there is still a reluctance in the community around the idea of women lifting weights.

“I always thought weightlifting was ridiculous,” Cass Roy, model and student, tells Bustle. “I thought that because I was a woman and an Asian woman, there would be no point.” Roy says that she thought weightlifting would make her bulky — a myth about the sport that’s been debunked, but also works to problematize women’s relationships with their bodies. “As someone who already felt extra tall in comparison to other Asians, I clung to being skinny — which quickly turned toxic.”

Cultural ideas of beauty all over the world often revolve around women making themselves smaller, but in countries like China, Japan, and South Korea, women are often told that being beautiful means being pale, slender, and ultra-feminine. In China, online fads like the A4 challenge (comparing your waist to an A4 sheet of paper) show just how pervasive the obsession with being slim can be. Even worse, when women deviate from those ideals, we find ourselves the target of unwanted comments and criticisms from relatives and strangers.

In recent years, however, there has been a growing number of Asian-American women, and particularly Southeast and East Asian-American women, entering the weightlifting community. Nowhere is this more apparent than on Instagram, where women like Cynthia Leu (168,000 followers) and Tiffany Nguyen (68,000 followers) have built a following by sharing videos of themselves powerlifting. (Powerlifting is a sport where an athlete tries to lift as much weight as they can in bench press, back squats, and deadlift.) Fitness coaches that focus on weightlifting, like Sohee Lee (154,000 followers) and YouTuber Stephanie Buttermore (385,000 subscribers), have also gained popularity.

While social media can be a breeding ground for unrealistic body expectations, the increasing presence of Asian-American women showing their strength has proven to be empowering for a growing audience. Thanks to increased representation in popular culture and social media, more and more women are embracing fitness and exercise that rebels against cultural expectations of beauty.

“I love the number of Asian women that message me on a daily basis telling me how they started lifting weights and exercising because of me,” Beverley Cheng, a Canadian coach and founder of 30 Days To Fit, tells Bustle. “I love that I can help them defy those stereotypes and restrictions for themselves. That’s a huge thing for me.”

Many people who start lifting find that noticeable benefits come not from physical changes, but mental ones. For Asian-American women who grew up in the States, this is crucial; not only do we have to answer to Eastern standards of beauty, but we also have to reconcile with the Western standard, which, for the past decade, has promoted tall and tan bodies with curves in all the “right” places — an impossible standard for the majority of women.

When constantly bombarded with the standards of Western and Eastern beauty, it can sometimes be hard to find where Asian-American women fit in. For many Asian-American women who lift, however, weightlifting has emerged as an active, productive rebellion against something they have struggled with their entire life; having other people, be it family, the media, or complete strangers, tell them who and how they should be.

In a time when many Asian-American women are trying to figure out what the hyphen in “Asian-American” means for them, the importance of hobbies that help you own and know who you are is crucial.

“Lifting empowers me as a woman, and especially as an East Asian woman,” Anna Chen tells Bustle. “People expect East Asians to be meek and submissive, but I know I’m far from that. Lifting makes me feel really strong both physically and mentally, and it has taught me not to let others put me into a box because of how I look.”

“It changed my life for the better,” Roy agrees. “I realized that the stereotypes of womanhood and East Asians were so deeply ingrained into my schema that it had inadvertently not only shaped how I saw the world and my place in it, but impacted how I saw myself.”

“The gym is one of the few environments where I feel completely comfortable and badass, even though I stand out from almost everyone else there,” Chen says.

Being a badass is one theme these women come back to over and over again. In a time when many Asian-American women are trying to figure out what the hyphen in “Asian-American” means for them, the importance of hobbies that help you own and know who you are is crucial. Weightlifting seems to help women achieve just that.

“Strength is multifaceted,” movement and strength coach Alyssa Chang tells Bustle. “It fits into the context of the gym, but also in life. You can develop physical resilience, but it should be accompanied by an exploration of learning how we can be strong, resilient and independent (both physically and emotionally). When I started to hit new strength markers, it most definitely aided my self-confidence. When I also learned to listen to my body and tune into its needs, I refined the strength of self-care.”

However, there are still strides to be made, especially when it comes to the representation and visibility of Asian-American women who work out. “I like being that Asian girl who works out, and I still feel like there is always room for more,” says Cheng. “I don’t think there are enough fit and healthy role models for all us Asian women out there to show how beautiful muscle and strength can be.”

Ultimately, for women who pick up lifting, it seems that the sport teaches you something about beauty that has very little to do with what’s on the outside, and more about the resilience within. Regardless of what your culture and heritage (or heritages) tell you that you should look like, the greater beauty is in learning to wade through the noise to do what’s best for you.

“Learning how to move, how to be strong is a beautiful gift you can give yourself that will influence your engagement and participation in life,” Chang says. “Learning that your body can do more than just occupy a shape is an invaluable gift you can achieve and then share with future generations.”

More like this
Why You're Seeing Green Bandanas At Abortion Rights Protests
By Lexi Inks
5 Ways To Stand In Solidarity With Women In America From The UK
By Sophie McEvoy
How To Fight For Reproductive Rights, Based On How Much Time You Have
By Courtney Young
How Getting An Abortion Has Changed From The ’60s Through Today
By Amanda Chatel
Get Even More From Bustle — Sign Up For The Newsletter