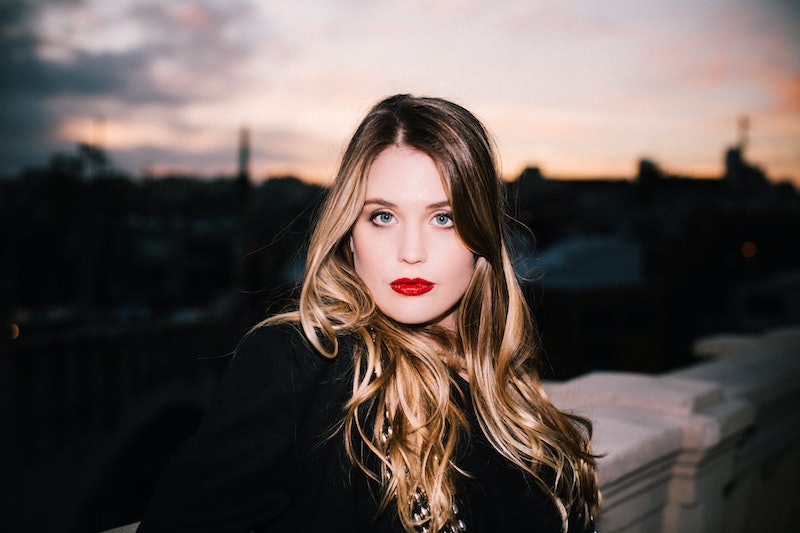 Singer-songwriter Valerie Broussard has seen her music featured on shows like Grey's Anatomy, Chilling Adventures of Sabrina, and Pretty Little Liars; performed in front of thousands; and dropped releases that have been streamed by millions. But even she had to pause recently when she saw a Times Square billboard of her face, alongside collaborator Kygo's, in a Spotify ad for their new song, "Think About You." Her hesitation wasn't because of her success — it was because she realized she was studying her face for flaws, rather than enjoying her moment.

"When your face is blown up that big, obviously it's exciting, but then your brain wants to search for all the little flaws and you kind of have to put that aside and be like, ‘No, no, no, no. This is not about that. This is about an exciting achievement in the life of a woman,'" Broussard says to Bustle in a phone interview. "[It's] not about whether or not the day that we had that photo taken I had a zit, and now it’s like, three stories tall."

Encouraging others (and herself) to embrace body positivity and care for their mental health is important to Broussard, and she's using her platform as an on-the-rise star to make that known. "I think that the vast majority of young women on the come-up right now have that message, and I think that’s amazing if we can all spread it together," Broussard says. "We can really make a difference in the way that young women see themselves."

Broussard herself looks up to Lizzo, viewing the musician as an inspiration for how she so openly loves herself and encourages confidence. "The positivity in her music and the body positivity and just the way that she seems to want to make people feel good about themselves is awesome," Broussard says. "I’m just so into it."

Like Lizzo, Broussard is no stranger to the stage, having been performing in musical theater since childhood. At 18, she moved from Philadelphia to London for college and immersed herself in the world of opera; a few years later, inspired by that community and her "ancient, moody" UK surroundings, she began songwriting. Before long, her songs were getting used on TV shows like Marvel's Inhumans and Lucifer, and in early 2019, she was signed to Palm Tree Records/RCA Records. In February, she was featured on "Think About You," and the collaboration with Kygo has earned 35 million streams on Spotify and over 14 million views on YouTube for its music video.

"I think every musician that reaches a point like this wakes up one morning and is shocked that someone who isn’t their mom likes their music," Broussard says now. "I think it’s an honor — it’s exciting that people want to share their lives with me and my music, that they want to add me to the soundtrack of their daily life."

Broussard hopes her new song "Deeper," featuring Lindsey Stirling, will also reach fans in a visceral way. The track was inspired by her experiences helping friends who deal with issues like mental illness and addiction. Explains the singer, "I wanted to write a song that told people that were struggling or those that were helping people that were struggling, which is kind of its own battle, that they weren’t alone."

With all her music, Broussard wants to resonate with listeners and teach lessons of heartbreak and growth, especially in regards to those tougher topics. "I think our generation is doing a lot to bring the conversation on mental health to the forefront, but there’s still a lot of work to be done and I’d love to be a part of that any way that I can," the singer says.

Right now, Broussard is working on new "moody, brooding" music that'll be released throughout the next few months, leading up to her currently untitled EP out this summer. She's making sure to embrace each new phase of her career as they come. "I'm trying not to focus too much on these sort of immaterial, awards-type things, and think more about the experiences that I really want," she explains.

That includes being as present as possible and truly enjoying her success — especially when the fruits of her labor are projected three stories high in the epicenter of New York.

More like this
Zooey Deschanel Can't Be Anyone But Herself
By Samantha Leach
Adele’s All-Female Lineup Includes Kacey Musgraves, Mahalia, & Self Esteem
By Shahed Ezaydi
Hannah Khalique-Brown Has Her Sights Set On 'Strictly'
By Frances Stewart
Daryl McCormack On His Unusual First Audition With Emma Thompson
By Olivia-Anne Cleary
Get Even More From Bustle — Sign Up For The Newsletter